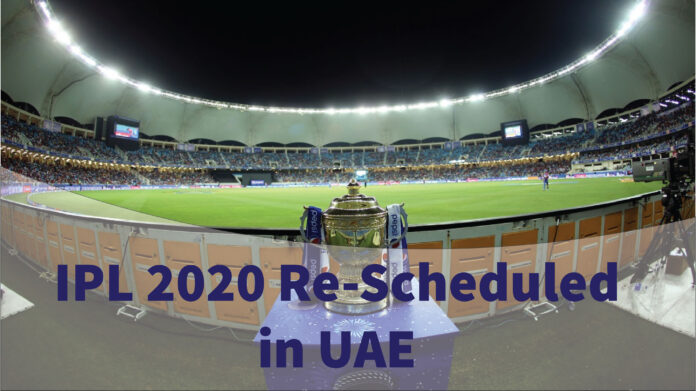 The biggest league of Asian Cricket sees the dark clouds of pandemic and successfully survived the heavy burden. After so many table-talks and marathon meetings it still stood strong and happening this year. However, the most awaited T20 Twenty World cup is postponed due to the great risks involved. Along with that, Euro T20 Slam, A European cricket league who is trying to debut in cricketing world has again postponed. Our best wishes are for World cup and Euro League and hope it will happen next year.

How IPL 2020 Canceled and Re-Schedule to UAE?

IPL 2020 was all set to play on 29 March 2020. BCCI has released the full fixture on 18 February 2020. IPL bubble was getting bigger and bigger until the Pandemic situation. Out of nowhere, BCCI temporarily postponed IPL and gave a re-schedule heads-up for 15 March. But the situation was got worst, and BCCI must postpone the event till further notice.

Luckily, Other countries including UAE fought well against the Pandemic and announced a green signal to tourists, event organizers and airlines. In the meantime, UAE has offered India to host IPL 2020 in their country under the secure environment. The fate of IPL has decided on 2 August after couple of meetings and consideration approval from Indian Government.

IPL 2020 is happening in UAE Officially from 19 September to 10 November 2020. Announced by the BCCI and Indian Government.

Franchises and crazy cricket fans are happy to hear the announcement of IPL 2020 new schedule. However, it is not happening domestically which is somehow bad news for economy. Still, it is all good to carry the decent brand image and loyalty to Fans, Franchises and Sponsors.

Great news already come up with some bad outcomes. In this situation, the cloud of pandemic is not vanished completely. That is why the BCCI and Indian Government has drafted a 200 pages SOPs and safety guidelines to make it safe and secure.

The health and safety protocol during IPL 2020 have discussed in the first 16 pages and SOP’s book which included a guideline for franchises, players, staff and team owners. Every concerned party must sign the agreement before taking part into the league.

These safety guidelines include Covid-19 testing while traveling, meetings, dressing rooms and during the live performance in a stadium. Management will perform multiple tests on all members of the league to create a foot proof bio-secure environment.

The venues in UAE are limited because it is small state. But it earned the title of great location for cricket matches in the past. UAE’s image in cricketing world will renewed after IPL 2020. In the past, IPL 2014 was played in UAE due to general elections in India. Now, the history is repeating itself while UAE embracing the IPL 2020 passionately.

The old domestic venues were planned in 10 different stadiums in 8 cities. But this time the venues for IPL 2020 are limited to three. We are expecting three cities for venues and it also confirmed by the IPL official website. IPL 2020 matched will played on the following venues:

Now you read all about IPL and it’s time to get excited. We are wishing our best regards to IPL management and Indian Government for their efforts. #KhabarLive #hydnews

ALSO READ:  Mumbai Airport Breaks Its Own Record of Handling 980 Flights in 24 Hours