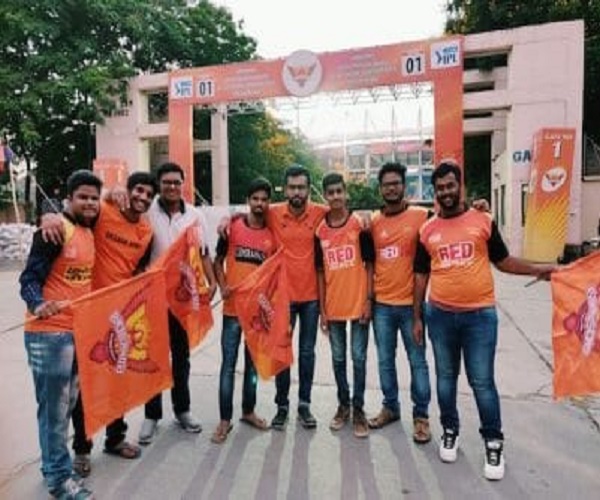 The 13th edition of the cash-rich Indian Premier League (IPL) will be different in many ways. There will be no crowd at the stadium and the tournament is set to be played in UAE after having moved out of India due to the coronavirus pandemic.

However, the fans are delighted to see the game back in action and all the fan clubs of different IPL sides are gearing up to cheer their teams, albeit in a different way – virtually.

The Sunrisers Hyderabad is one of the strongest teams in the league their official fan club ‘Orange Army’ is leaving no stone unturned to be their 12th man off the ground. The official fan club which was founded in 2015 by Ajay Thakur and Rakshith, started with a small group of people. In no time, it took giant strides to become an official fan club and now has over 24,000 members on Instagram, and over 1 lakh on their Facebook page.

Speaking about starting the club, Ajay said to #KhabarLive, “Our idea was to bring all the fans of Sunrisers Hyderabad under one roof. So we started this army with a few people. Now it has grown exponentially and is one of the strongest in the country.”

“We screen matches when the team is playing away from home and will have bands in the grounds for home matches cheering the players. Apart from that, we conduct different events throughout the year to engage fans. We have had events like celebrating David Warner’s comeback into the side after a year’s gap, celebrating players’ birthdays and others,” added Ajay.

It is going to be challenging since we can’t go to the ground and see matches. So we are planning to conduct events virtually. We post updates of the team to keep fans informed and stay in touch. This time, we need extra initiative to support SRH from home,” added Manish who is pursuing Bachelor’s degree in Aeronautical Engineering from Malla Reddy College of Engineering and Technology in Hyderabad.

Ajay also revealed that the support from players and SRH management keeps them motivated all the time. Both Ajay and Manish feel that though they miss watching action live, thanks to Star Sports and BCCI efforts in conducting the tournament, they will get a chance to spend time watching the matches with family. “It is a great time for the family to get together and watch the game.

The pandemic has forced everyone confined to their homes. Many missed connecting with friends and now this provides an opportunity to connect and discuss the game,” said Ajay. The Orange Army feels that the SRH team has the ammunition to go the distance and bring back the trophy which they won in 2016. #KhabarLive #hydnews