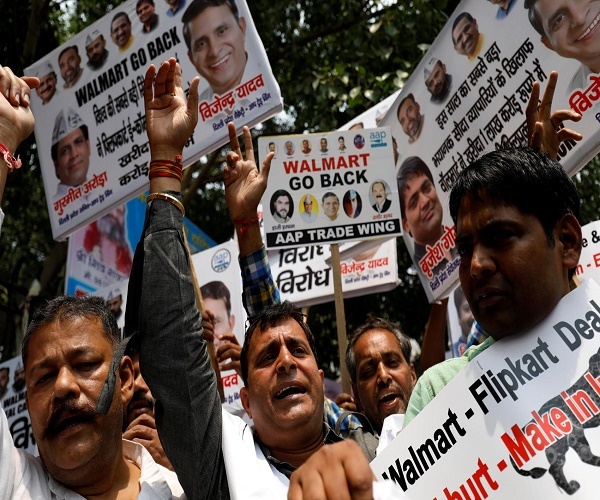 The year 2018 is ending on a terrible note for India’s e-commerce industry. Late yesterday (Dec. 26), the government suddenly announced several restrictive changes in its foreign direct investment policy for online retailers, which was first floated in 2016.

Among other things, the government has barred online marketplaces from entering into exclusive deals for selling products on their platforms and said that not more than 25% of the inventory on an e-commerce platform can be from a single vendor.

The changes will be effective from Feb. 01.

“The draft is clearly designed to protect the retail trade spread across the country—the huge majority subsists on offline trade. Perhaps it would have been progressive if it had delineated new initiatives to support new growth than pure protectionism,” Vidhya Shankar, a partner at Grant Thornton India, told #KhabarLive.

The move comes after online sellers complained to the Competition Commission of India that the country’s largest e-tailers, Flipkart and Amazon, were indulging in predatory pricing and deep discounting, destroying the business of smaller vendors. Even offline sellers have complained against the rock-bottom prices offered by online retailers, which has hit footfall in brick-and-mortar-stores.

India’s largest home-grown e-commerce firm, Flipkart, may not be as impacted by this clause. Flipkart did have an exclusive seller for its platform, WS Retail, which was initially controlled by Flipkart’s founders Sachin Bansal and Binny Bansal. However, WS Retail reportedly stopped selling on Flipkart in August.

However, the curb on exclusive deals will hurt both Amazon and Flipkart, besides several others.

Launching products exclusively on their websites and apps has been a major money spinner for online retailers. For instance, Flipkart sold over 3 million smartphones on the first day of its Big Billion Day sale in October thanks to its exclusive deals to launch OPPO F3 Plus, among other mobile phones.

While it benefitted online retailers, this practice had left small traders and sellers particularly miffed as they could not match the deep discounts large companies offered.

The government clarified several other policy details that may dampen the mood for online marketplaces:

Cash backs: These schemes ought to be fair and non-discriminatory, the new policy says. “For the purposes of this clause, provision of services to any vendor on such terms which are not made available to other vendors in similar circumstances will be deemed unfair and discriminatory,” the government circular said.

Shankar of Grant Thornton, however, feels this point needs further clarity, “because online commerce is behavior shaping and discounting is a popular Indian and global ploy to build demand. Regulating marketing spend affects other businesses that provide ancillary services an areas core to SMEs. Given that SMEs engine future growth, we need to be cognizant of knock-on effects.”

ALSO READ:  India's 'Couplepreneurs' Feel Proud On Their 'Own Work' And 'Success'

Compliance: E-commerce companies must furnish a certificate confirming compliance of all guidelines, along with a report of a statutory auditor. These should be submitted to the Reserve Bank of India by Sept. 30 every year.

Work in progress
Analysts and experts are currently split on this latest government announcement.

“It will kill competition and there will be nothing for online retailers to differentiate on,” Amarjeet Singh, a partner at KPMG, told #KhabarLive.

“It will kill competition and there will be nothing for online retailers to differentiate on.”
However, a senior partner at a Mumbai-based think tank, who has been part of the meetings with the government in the process of forming the draft, said the policy is not essentially against discounts. “It is more of an attempt to curb unethical discounting. It is important to rein that in to protect small and medium sellers.”

While Flipkart did not respond to an email from #KhabarLive, Amazon India spokesperson said, “We are evaluating the circular.” #KhabarLive