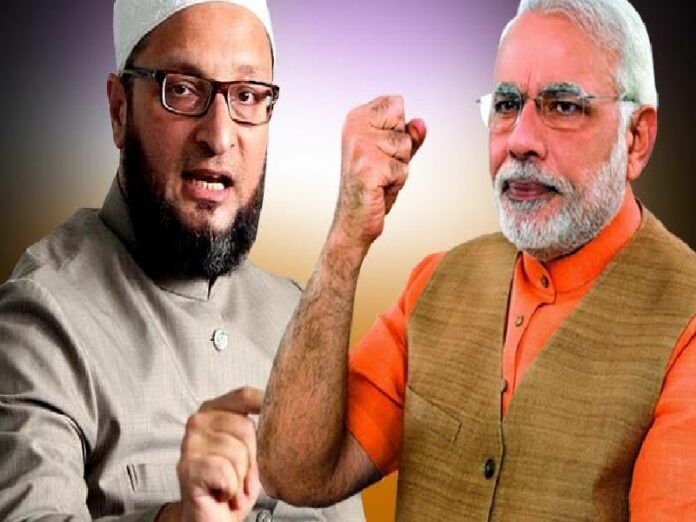 Prioritising its strategy of religious polarisation over development in the Greater Hyderabad Municipal Corporation (GHMC) elections, the BJP has been aggressively campaigning with dog whistles against the Muslims in Hyderabad.

As part of this strategy, questioning the “unholy” alliance between the Telangana Rashtra Samithi (TRS) and the All India Majlis-e-Ittehad-ul-Muslimeen (AIMIM), a Muslim party, has become BJP’s main political plank, which, it hopes would reap dividends and further spread their ideology.

Though K Chandrashekar Rao-led TRS and Asaduddin Owaisi-led AIMIM are not in any kind of political alliance for these polls, they consider each other to be “friendly” parties. While previously, the TRS never shied away from their public display of affection towards AIMIM, the KCR-led party is evidently on the back foot and distancing themselves from the AIMIM in this election. The BJP has been propagating that “a vote to TRS is a vote to AIMIM” and that an “AIMIM representative will become the mayor if the TRS wins the election.”

In response to BJP questioning the alliance, TRS working president and Minister KT Rama Rao (KTR), who has been entrusted with the election campaign, clarified that there is no question of an alliance between both the parties. He said that the TRS would, in fact, better its performance in this election and snatch at least 10 divisions from the AIMIM’s bastion against the five seats in the previous election. “Mark my words, the city will see a Lady Mayor of the TRS,” KTR said, rejecting the speculations about offering the Mayor post to AIMIM, in case of a fractured verdict.

In retaliation to the TRS minister’s remark, AIMIM Charminar legislator Mumtaz Ahmed Khan likened KTR to a “parrot” and further threatened that the AIMIM has the ability to topple the TRS government within two months. “KTR is a parrot. I remember the words of Sultan Salauddin Owaisi (father of Asaduddin Owaisi) that AIMIM is a kingmaker. They know how to form governments and how to dissolve them. If the AIMIM decides to dissolve the government, it will just take two months,” he said.

Congress working president Revanth Reddy dubbed this political development of rivalry between both the parties as “public posturing” and having a “tacit understanding”.

However, the BJP is not to be credited for this rift between the TRS and the AIMIM, said senior journalist Akhileshwari Ramagoud. “A statement by an individual (Mumtaz Ahmed Khan) should not be given such merit. The AIMIM has this habit of making such statements in their stronghold, which can also be viewed as a strong-arm tactic and nothing more,” she observed.

Echoing the views of Akhileshwari, another senior journalist and political analyst K Nageshwar said that the reaction of the AIMIM is natural, as such identity-based parties would not tolerate any “friendly” party or otherwise, which threatens their domination in their stronghold. “AIMIM would not spare anyone, whether it is KCR or any party, which emerges as a threat in their bastion. If the TRS tries to flex its muscles in the Old City, AIMIM would consider TRS as its primary enemy,” he pointed out.

Nevertheless, Nageshwar agreed that the BJP has been successful in this election campaign in questioning the relationship between the TRS and the BJP. “Previously, in the 2016 GHMC elections, too, they tried this strategy but it was not this effective. This political strategy will definitely have an impact in the voting,” he said. #KhabarLive #hydnews