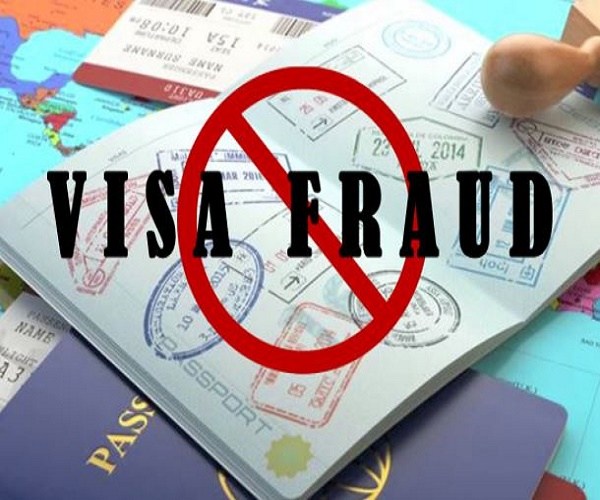 Hyderabad is a name with many credits – smart city, growing city, happening capital and now, crime hub of various cyber crimes – well, the latest addition in crimes is visa and immigration fraud for many aspirants. This fraud modus operandi too unique and combined with technology, expertise and connivance.

Fraudulent travel agents sending workers to the Middle Eastern countries on visit visas
Hyderabad could be emerging as a hub for passport and visa frauds among the southern States. Daily wage earners, in particular, are being trafficked to Dubai, Kuwait, Qatar and other Gulf countries with the promise of hefty wages, a senior immigration official said.

Over the last two years, there has been increasing criticism of the U.S. Citizenship and Immigration Service’s (USCIS) paperwork requirements for processing H-1B visas. But a newly released WikiLeaks State Dept. cable helps explain why the USCIS is being aggressive.

This stepped up enforcement follows a USCIS study, released in late 2008, that identified fraud and “technical violations” in about 20% of the visa applications it reviewed.

Since that report, companies applying for H-1B visas are sometimes asked to provide floor plans of their offices, photographs, copies of leases, and other documents to prove that they are real. Some feel this process is running amok.

Cisco was one of the companies that had to prove its existence, complained U.S. Rep. Zoe Lofgren, a Democrat whose Congressional district includes Silicon Valley, at a U.S. House hearing last month on the H-1B visa.

“I don’t think anybody should ask to see a floor plan of Cisco to see if the company exist — that’s absurd, and yet that happened,” said Lofgren.

The officer said that workers, not only from the northern districts of Telangana, but also from Andhra Pradesh, Tamil Nadu and Karnataka, are looking at Hyderabad to fulfil their dreams of earning in dirhams, unaware of that they could end up behind bars, the officer said.

“They approach fraudulent travel agents here, who try to send them to Qatar or other countries for work by applying for a visit visa. The agent charges at least ₹30,000 a person; the amount varies from country [in which work is sought] to country,” he said. The agents cheat gullible people by issuing a fake visa.

They cheat the gullible people by issuing a fake visa. This week alone, the Bureau of Immigration officials at the Rajiv Gandhi International Airport in Shamshabad here detained 20 persons, a majority of them women, while they were trying to board a flight to Kuwait and other Gulf countries on visit visa for work purpose.

“After verifying their passports, we learnt that many of them have worked abroad for more than two years by obtaining a visit visa and were going back on a fresh visit visa. They do not have any work permit,” the immigration official said, adding that it is a clear case of human trafficking.

On Sunday, the immigration officials detained 10 persons, including seven women, who were trying to flee the country on a visit visa.

The women, who hail from Kadapa, Chittoor, West Godavari and East Godavari districts, were later handed over to RGIA police for further investigation.

Police said the passengers were detained at the immigration counter when their travel documents were checked and found to be fake. “On Wednesday, we booked nine women from Karnataka, who were about to board a flight to Kuwait on visit visa,” said inspector G. Vijay Bhaskar Reddy.

Meanwhile, the H-1B fraud “is one of the top two visa categories for fraud throughout Mission India. All posts regularly encounter inflated or fabricated educational and employment qualifications,” the consulate wrote.

In an 18 month period, the U.S. investigated 150 companies in Hyderabad that applied for H-1B visas of which 77% “turned out to be fraudulent or highly suspect,” the consulate reported.

The consulate also reported that “the state of Andhra Pradesh, and Hyderabad in particular, has long been the hub for fraudulent document vendors in India.” Separately, many of the students affected by the closing of Tri-Valley University in Pleasanton, Calif., following allegations of visa fraud, were from this region in India.

During site visits in Bangalore, Chennai consulate officials “encountered several fictitious companies staffed by Hyderabadis. The Hyderabadis claimed that they had opened shell companies in Bangalore because ‘everyone knows Hyderbad has fraud and Bangalore is reputable.” #KhabarLive