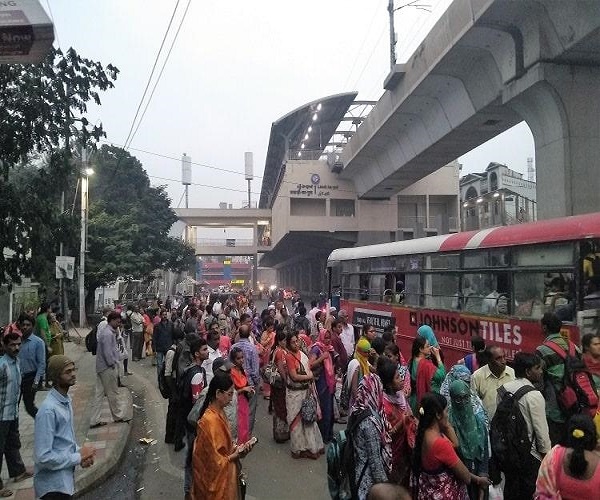 Whom do the city’s roads belong to? Do they belong to the cars, two-wheelers, buses or to the pedestrians? Take Lakdi-ka-pul in Hyderabad for instance. It’s one of the city’s busiest traffic routes, and has no pedestrian crossings.

To get to the other side of the road, the only foot over bridge is the metro station, where you may have to pay Rs 10 (which is the minimum amount) depending on whether you use the stairs or the elevator. The fact that the city may not be pedestrian-friendly is a sentiment that is being echoed by transport researchers as well.

Lakdi-ka-pul is a well-connected locality — served by buses, the metro and the MMTS (the Multi-Modal Transport System, the city’s suburban railway) — and witnesses high commuter traffic throughout the day. All metro stations in the city double up as FOBs, and are accessible to all pedestrians.

“One can catch a bus to anywhere in the north-west, east or south Hyderabad from the place. This is probably the biggest bus route road that is not a bus terminal. About a 100 buses pass through this triangular one-way route every hour,” says GSR Chaitanya, a transport researcher, who, as part of his research, walked along the triangular one-way route. He recently presented his observations in a presentation to a crowd at Do Din 2018, an event organised by the Hyderabad Urban Labs.

Chaitanya observed that ever since the Hyderabad Metro was built, the bus bays that allowed the smooth flow of traffic along this route were made smaller.

”This is because the stairways for the metro have taken up space that used to be part of the bus bays. This has had a cascading impact,” says Chaitanya, as there is less space for commuters on the footpath. The railings, which have been placed to demarcate the bus bay, forces people to stand on the road. Due to this, buses have begun halting on the main road. This makes Lakdi-ka-pul a traffic choke point “because the metro stairs and footpaths and bus stands were not designed well,” he says.

Commuters also have to struggle to use the bus stop, as they have to cross the road. There are no visible zebra or grade crossings to access the three major bus stops in the locality, and a pedestrian has no choice but to count their luck and cross the dangerous highway.

Chaitanya points out that when seen from above, Lakdi-ka-pul is triangular. “The three roads that form the triangle are all one-way. These one-way roads serve traffic coming from South and Eastern parts of the city and moving towards north-west Hyderabad, using the new and old Bombay highway,” he says. There are three bus stops on each of these one-way roads, and none of them are easy for commuters to access unless they are able-bodied, Chaitanya found.

Chaitanya walked around the triangle to figure out how hard it is to access these places. The main intersection does not have any signal to regulate traffic and pedestrians have to struggle to even reach the metro staircase.

“The new bus shelters also end up blocking the footpath. We need to design a road with all of its elements. Bus shelters, pedestrian crossings and consider them all to be part of the street furniture.”

ALSO READ:  Are Modi And Amit Shah Expecting Too Much Of 'Hindu Extremism'?

With this being the condition of Lakdi-ka-pul, the rest of Hyderabad isn’t pedestrian friendly either.

“In Indian cities, a third of the population walks. Even if people are using the bus or auto, people still need space for walking. It’s not just Hyderabad, there are no cities in the country that are pedestrian friendly,” says Girish Agarwal, a professor at Jindal School of Art and Architecture

He points out that the construction and design of footpaths and pedestrian crossings are derived from the state’s transport policy, but are not followed as there is no systematic requirement for departments involved to interact.

“The copy paste design for metros, lifted from European countries, is not suited for building metro stations in India. There is a need for more stakeholder involvement. On paper, they hold public meetings, but no one really knows when or where it happens. I was involved with a transport project in California, the US, we spent two years consulting with the people who will be using it before groundwork started for the project. Here we decide where the station will come up and then look for comments from the public,” he adds. #KhabarLive