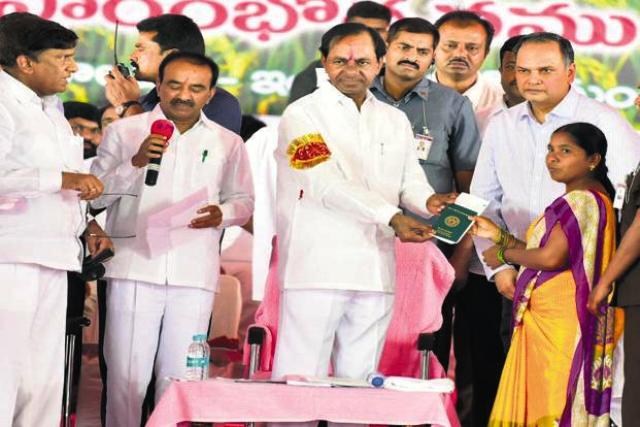 According to Telangana Government, investment is one of the ways to enhance agriculture productivity and also income of the farmers. This is scheme is also known as “Agriculture Investment Support Scheme” or “Rythu Bandhu”.

Advantages of Rythu Bandhu:
– Takes care of initial investment of every farmer
– Does not allow Farmers to fall into the debt trap
– Relieves Farmers from debt burden

Telangana government grant of Rs. 4,000/- per acre per farmer each season for the purchase of inputs like Seeds, Fertilizers, Pesticides, Labour and other investments in the field operations of Farmer’s choice for the crop season.

However, Rythu Bandhu is not without criticism. Farmer groups have demanded that tenant cultivators who number around 1.5 million be included under the scheme. “The scheme is providing investment support to farmers, but it is excluding tenant farmers who cultivate 30 percent of land in Telangana,” said Kiran Vissa, a member of Rythu Swaraj Vedika, an organization working on farmers’ rights.

So far, 5.8 million Telangana farmers have been benefitted from the Rythu Bandhu Scheme covering nearly all farm households except tenant cultivators. Before it was announced, Telangana had undertaken an intensive exercise to rectify land records across 10,500 revenue villages to ensure there were no glitches in execution.

Chandrashekar Rao (KCR) had also followed up on his 2014 promise of a farm loan waiver which cost the state exchequer Rs. 17,000 crore, besides promising yet another in the recently concluded polls. The feedback on the 2014 farm loan waiver (which took time till 2017 to complete) is not any different from states such as Maharashtra and Uttar Pradesh, which are implementing a farm loan waiver now.

Several farmers across Telangana said that due to delays between installments cleared by the state government, the accrued interest (on remaining loans) nullified the impact of the farm loan waiver. “I had a loan of over Rs. 1 lakh and it is more or less the same now, since the waiver did not happen at once. I received a notice to clear my loan a few weeks ago. So it was of no use,” said B. Mahesh Reddy, a farmer from Siddipet district. Reddy, however, is all praise for the Rythu Bandhu scheme, saying it gave him some respite.

A senior official from the Telangana agriculture department, said since the flagship scheme was announced, cheques worth Rs. 5,256 crore were distributed. “There was some delay in cheque distribution for the Rabi season because the model code of conduct was in place before the assembly elections. More than 5 million farmers have been given cheques out of the total 5.8 million. Some may not have received it due to problems with their land records, or they may have been absent when cheques were distributed.”

Following Telangana’s footsteps, on 21 December, the Odisha Government also announced an income support scheme, which aims to cover 90 percent of farmers in the state. The scheme, however, is an improvement on the Telangana model, as it includes landless rural households. Under the scheme, farmers will receive support of Rs. 10,000 every year, while landless rural households will receive Rs 12,500 for investments in fisheries and animal husbandry. The scheme, which will cost around Rs. 5,000 crore, is likely to benefit over 4.5 million families.

Siraj Hussain, a former secretary at the federal agriculture ministry said, “Income support is the future of subsidy transfer to agriculture, wherein the Aadhaar ecosystem can be effectively used… but it may not be enough to address the price collapse problem which is hurting farmers immensely”. He added “But I fear politicians will not give up the potential of a loan waiver promise, which has immediate electoral benefits.” #KhabarLive