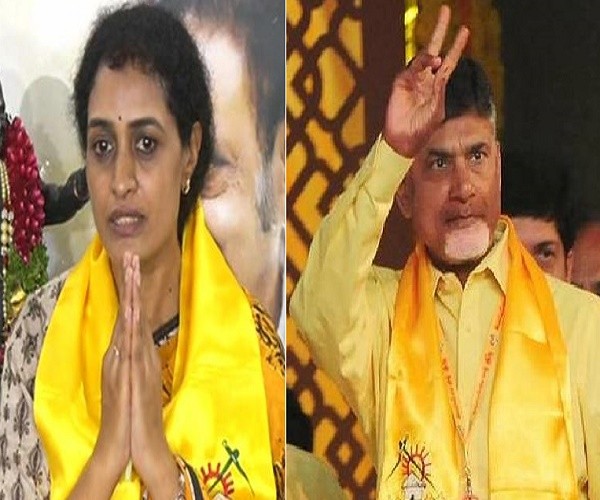 Andhra Pradesh Chief Minister Nara Chandrababu Naidu’s political game in the context of the Telangana Assembly elections has two sides to it. While the TDP’s alliance with the Congress is an unprecedented phenomenon, it could be inferred from the current scenario that Chandrababu’s new strategy to bring in late Rajya Sabha member Nandamuri Harikrishna is another side to the political game.

Chandrababu, who made full use of the family members of late Chief Minister Nandamuri Taraka Rama Rao (NTR), is now using Harikrishna’s daughter Suhasini as a pawn in his hands.

Refusing the TDP ticket from Kukatpally constituency to senior leader Peddireddy, Chandrababu roped in Suhasini into the contest. Amid much hype, Suhasini filed her nomination in presence of TDP MLA from Hindupur, Nandamuri Balakrishna. Although Balakrishna earlier announced that he would campaign for the people’s alliance, the TDP leaders did not carry the flags of the alliance partners while filing the nomination in Kukatpally.

Meanwhile, actors Jr. NTR and Kalyan Ram sent out a message saying that the TDP is a sacred organization. It is unclear whether the two actors had the slightest difficulty in supporting the TDP after it had joined hands with the Congress, against the party’s ideology and aspirations of NTR. One would get the feeling that NTR’s family members are insulting the late leader with their support to the Congress.

If the TDP really had the strength to fight it out in Telangana, NTR’s family should have pitched for contesting in all constituencies. If NTR was alive today, one would wonder how he would have reacted to the idea of the TDP-Congress alliance. With an anti-Congress ideology and to protect the interests of the Telugu people, the TDP was formed by NTR.

Back in those days when the TDP was formed, Chandrababu, a Congress leader at that time, challenged NTR saying that the film personalities were not capable of surviving in politics. Although NTR was hesitant to accept Chandrababu into the TDP, after it came to power, he was compelled to accept his son-in-law into the party.

Later, Chandrababu was appointed as the Chairman of Karshaka Parishad, besides changing his political base to Kuppam from his home constituency, Chandragiri in Chittoor district. Following this, Chandrababu began his manipulative games with NTR’s family and went on to replace NTR as the CM in the pretext of the TDP founder’s second marriage with Lakshmi Parvathi.

After NTR’s death, Chandrababu went on to sbecome the self-styled political heir of the late leader. While Chandrababu was succesful in earning the trust of NTR’s family members, Daggubati Venkateswara Rao realized he was deceived by Chandrababu, but by then, the damage was already done.

Despite the Daggubati couple’s attempts to re-associate with the TDP in subsequent years, Chandrababu was cautious of keeping them away from the party. With this, the couple joined the Congress under late Dr YS Rajasekhara Reddy and Daggubati Purandeswari contested from Bapatla with Congress ticket. In a masterstroke, Chandrababu took full control of the Nandamuri family with Nara Lokesh’s marriage to Balakrishna’s daughter.

On the other side, Harikrishna was also humiliated on numerous occasions by the TDP Chief. After giving Harikrishna the ministerial berth when he was not an MLA, Chandrababu later ignored him after he was elected an MLA. Although Harikrishna later launched his own party, it did not taste success in elections.

Thereafter, the cold war between Chandrababu and Harikrishna continued even after the latter was nominated to the Rajya Sabha by the former. It was in the air in political circles that Jr. NTR was sidelined after utilizing him in the 2009 election campaign owing to Chandrababu’s fear of resistance to the rise of Nara Lokesh as a youth leader in the party.

All in all, it could be inferred that NTR’s family members have in a way worked in favour of Chandrababu for various reasons. It is said that Chandrababu tried to rope in Kalyan Ram into politics after Harikrishna’s death but the actor did not agree to do so. In a latest development, Chandrababu encouraged Suhasini’s entry into politics. Until very recently, no one knew that Suhasini was keen on entering into politics.

It appears that Chandrababu is going by a strategy that the Nandamuri family could be blamed if she loses in the election and at the same time he could claim credit if she goes on to win from Kukatpally. Though Suhasini could be blamed for the TDP’s decision to join hands with the Congress, Balakrishna should have asked about the party’s ideological viewpoint in its decision. However, Balakrishna is bound to campaign for the same Congress party which was abused and criticized by his partymen for years.

To sum it up, the Nandamuri family is succumbing to the antics of Chandrababu in politics once again.#KhabarLive