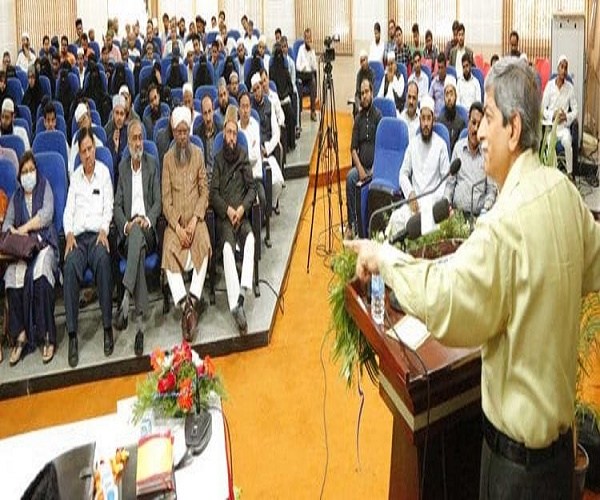 The Madrasa students can avail this unique opportunity to fulfil their dreams of pursuing modern education in Maulana Azad National Urdu University in Hyderabad.

Though the Maulana Azad National Urdu University (MANUU) is striving hard to facilitate the entry of Madrasa passouts into various streams of modern education, the response from them has been lukewarm, said Mohammad Aslam Parvaiz, Vice-Chancellor of MANUU.
He was speaking at the inaugural address of the two-day national seminar on ‘The Contribution of Madarsas in Promotion of Indian Culture, Civilization, Science & Arts (With Reference to Persian, Arabic and Urdu Literature)’, here on Wednesday.

The seminar is being organised by the university’s Department of Persian in collaboration with the National Council for Promotion of Urdu Language, New Delhi.

As part of the efforts, the university had launched bridge courses two years ago, Parvaiz said. The Madrasa students can avail this unique opportunity to fulfil their dreams of pursuing modern education. Passouts are eligible to join the undergraduate or postgraduate courses directly in Urdu, Arabic, Persian languages and Islamic Studies Departments, he said.

MANUU had introduced one-year bridge courses with a personal push from the Vice-Chancellor. These facilitate the students to join BSc, BCom, BA (Economic) or polytechnic courses. Parvaiz urged the audience, mainly consisting of Madrasa passouts and administrators, to equip themselves with the latest knowledge to face the challenges. Madrasas have played an important role in nurturing the Urdu language, he said.

Noted scholar Maulana Khalid Saifullah Rahmani said the value of Arabic translation work carried out in India was no less than the Arab world itself. #KhabarLive