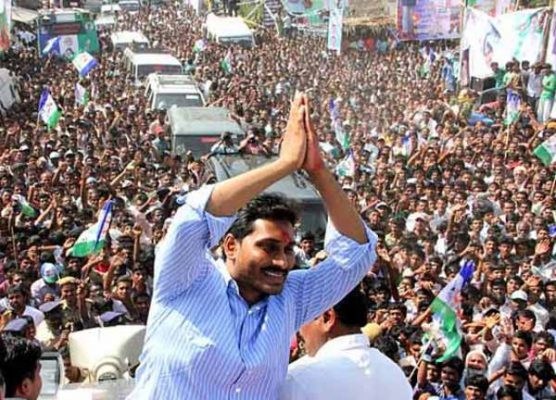 The scale of YSR Congress Party’s win in Andhra Pradesh with a tally of 151 seats in the 175-seat Assembly has set a record. It was a blitzkrieg of people’s anger against the Telugu Desam (TDP) government. The TDP was reduced to a mere 23 MLAs, equivalent to the number its chief bought from other parties during his term. The mandate is also a rejection of the manipulative politics of Chandrababu Naidu.

Naidu hoped to ride to victory through unscrupulous thought-policing, pompous propaganda support from his friends in the media and ill-gotten money power. But people could see through his devious rule and roundly trounced him. It is a remarkable verdict in a State prone to caste polarisation.

The credit goes to the people of Andhra Pradesh, who exhibited extraordinary political astuteness in recognising the need of the State at this critical juncture and made the right decision. That they also refused to fall to the TDP propaganda and its yellow journalism is praiseworthy.

But the victory would not be all that joyful for the YSRCP since it has inherited a financial mess, courtesy the ‘world class economic wizardry’ of Naidu. Everything in the State was supposed to be in the top 5 league in the world. So there were numerous foreign tours, world and State economic summits for FDI to build world-class capital, world-class infrastructure and bring in world-class companies.

But nothing actually happened except heavy outflow from the already in the red state exchequer. These actions need to be evaluated to find out how appropriate they were, the extent of expenditure incurred and if they actually benefited the State.

ALSO READ:  Will 'Charminar' Too Get 'Five Acre' During 'Future Of Hindutva' Claims?

Naidu’s government expenditure on other fronts too was no less than world-class – on his oath takings, capital construction inaugurations, Polavaram celebrations, Pattiseema and Secretariat-like temporary projects, Pushkaram carnivals, dharma deekshas and dharnas, etc. Expenditure on everything, including his and ministers’ homes, camp offices in Amaravati and Hyderabad, was upscale without any regard to the State’s precarious financial condition. Overdrafts, loans exceeding FRBM rules, loans in the name of corporations, special purpose vehicles and government loan bonds were taken at will.

The Centre has provided a deficit grant of about Rs 30,000 crore from 2014-15 to 2019-20 to balance the deficit Budget. The State also got substantial Central tax devolution and Central grants every year, much more than Telangana.

Yet, there was no conscious effort to reduce the revenue expenditure and make a balanced Budget. The State Budget remained as deficit as it was in the beginning year of the bifurcation. The State budgets also became dicey to understand as there was no correlation between the Budget and the final accounts.

The spending of special grants from the Centre is another mess. The Rs 2,500-crore for capital has yielded only a leaky temporary Assembly building and a High Court building. A 35,000-acre most fertile land is being destroyed for the capital. Even before farmers got their dues, thousands of acres of that land was allegedly allotted to the proxies of the TDP government.

In Polavaram project, only a spillway is constructed. Rest of the project is in the doldrums. Instead of concentrating on it, a superfluous side project called Pattiseema Lift Irrigation was undertaken with Rs 1,200 crore. This too has run into problems and misuse of Rs 400 crore of funds was reported. There arose several problems between the Centre and the State in its estimate, execution and R&R works. It is said that Rs 12,000 crore has been spent on the project so far. But the execution is in a mess owing to many unanswered questions and allegations of graft.

Nothing much is happening on the ground with regard to national institutions sanctioned to AP as well. Infrastructural projects like airports and sea ports after a lot of fanfare have run aground. There is a talk of misuse of funds and non-completion of several populist schemes promised as part of the 2014 elections. On the whole, a huge financial mess has been created in the last five years of the TDP regime. It will be a Herculean task for the new government to clean the proverbial Augean stables in AP.

The first priority for the YSRCP government should be to understand the mess and bring it to public domain quickly. Judicial commission(s) may be a good idea. Then draw up the plans to make the State Budget balance the revenue and expenditure slowly and steadily. Funds also need to be found for implementing the too many populist schemes announced by the YSRCP to beat the TDP at its own game. Then fix responsibility of the financial mess and start prosecution.

A fulltime professional financial adviser to help in this trapeze act would help. Next is to extricate the State from the quagmire of Amaravati. Locate it in the uplands in the same vicinity or elsewhere where it is more feasible based on a consensus of all the people of all regions. Then take Polavaram forward.

If this government too repeats the same game of demanding funds from the Centre, playing politics out of it without trying to improve its finances and balancing the Budget, and go on a spending spree, the State will be the loser. AP has got the resources and ability to cope with the division blues. Chhattisgarh is a good example to follow.

The new government should have its feet firmly on the ground and follow a practical approach. Emotional and pompous ideas should make way for down-to-earth and pragmatic schemes. Let us hope the YSRCP government will do it and not let people of AP down. #KhabarLive