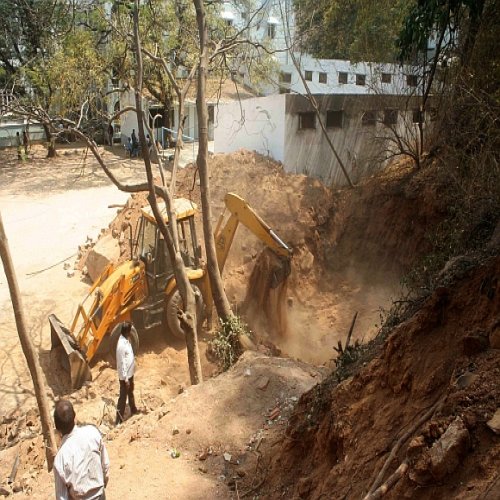 The demolition of Telangana secretariat buildings had been taken up suddenly and swiftly, till the high court stalled the works on technical grounds.

But the entire demolition exercise has been kept a completely non-transparent affair. All the roads in and around the secretariat complex have been sealed and traffic has been diverted.

Not a single soul is being allowed near the demolition site; not even media persons who wanted to picturise the entire demolition exercise. All the closed-circuit cameras in and around the secretariat have been closed.

The electronic media persons had to climb the adjacent high-rise buildings to take some shots, but they are not very clear.

Even the workers are not being allowed to carry their mobile phones inside. A couple of police constables who tried to capture the demolition works in the Secretariat complex were suspended and attached to the head office. Even the demolition of two mosques and a temple inside was kept a complete secret.

This has definitely surprised everybody as to why the government is maintaining so much secrecy about the demolition. It has led to several speculations and rumours in the social media and also in some political circles.

According to one such rumour, there is some hidden treasure of gold and silver beneath the Nalla Pochamma temple and also the Saifabad Palace (G Block) within the Secretariat premises and the ruling party bosses were told about the same.

That could be the reason why the buildings are being razed to the ground in a secretive manner so that any treasure that is found could be clandestinely shifted to the treasuries of the bosses.

The G-Block of Secretariat, which is in a dilapidated condition, is likely to turn into a pot of gold for the state government which has decided to demolish the existing buildings in the Secretariat.
Block G, which was once known as Saifabad Palace, belongs to Nizams of Hyderabad state. G Block was built in 1888 during the reign of sixth Nizam of Hyderabad. Mahbub Ali Khan, Asaf Jah VI used the palace as his office.

The Nizams used quality teakwood for the construction of G Block. The State government officials said the teak wood would be auctioned after demolition.

“We have valuable teak wood in the G Block. Once the teakwood furnishings and beams of timbers are removed from the G Block, they will be auctioned,” official sources said. They added that the wooden furniture in all the blocks will be removed and auctioned so that the government need not spend much money for demolition.

However, there was a discussion among Secretariat employees about the real “gold pot” that was unopened till date in G Block. The Saifabad Palace was once used by Nizam as his treasure chest.

However, officials remained tight-lipped over state government’s search.
It may be mentioned that Archaeology department in past requested GHMC twice to dewater the passage from Home Science College in Saifabad to G Block. But, GHMC did not respond.

Nobody knows how much truth is there in these rumours, but the talk has definitely generated a lot of curiosity! #KhabarLive #hydnews