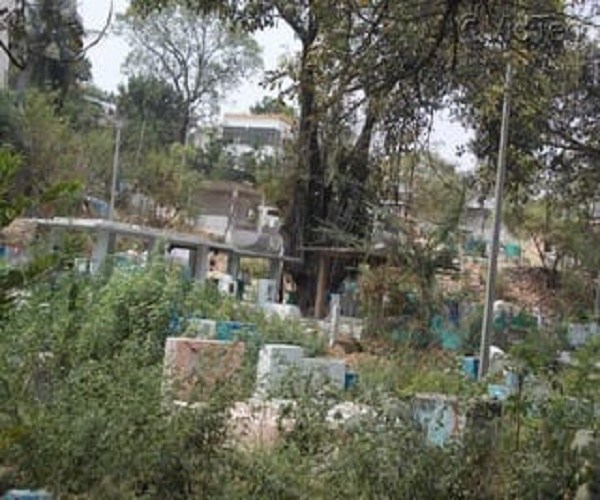 Several movies, serials and novels have talked about unclaimed territories, houses and porches reclaimed by the unseen eerie presence, better known as ‘haunted’ in the common man’s world. Many cities and lesser-known towns in the country wear that tag thanks to the experiences of people or the anecdotes that got popular with time.

Hyderabad is no exception especially with its old palaces, forts, abandoned areas and other structures. For quite some time, people have been sharing their paranormal experiences felt in Banjara Hills, especially on Road No. 12. We try to dig deeper and connect the dots with expert opinions.

It was a dark summer night. The third floor of Amrutha Valley was almost empty save for Zara sleeping on the rooftop of the penthouse. The first floor of the duplex was unlit as her flatmate had gone out of the country. The temperature was 45°C which appeared sickly with the power cut. Zara turned uncomfortably on the thin mattress feeling the heat. She checked her phone. It was 2 am. Just then, she noticed a silhouette on the water tank above her room.

“It was staring at me. I got up and asked ‘who’s there’ twice. There was no answer. I sat and shouted again. There was no answer, but slowly the figure retreated,” she shares. The next day, she checked with the security guards, but they showed complete ignorance. She narrates a series of other incidents in that very house which happened whenever she was alone.

“I don’t believe in ghosts, but a lot of times all of a sudden, the doors and windows of the flat would start shaking violently as if someone were trapped inside. While taking a shower, I’d often feel somebody was there. Many a times, I heard several women weeping together,” she says, adding that she’d sometimes start weeping sans any reason.

“I’d be gripped with a fear and no, I didn’t have any mental health issues. Later, everything in my life started going downhill,” she informs. She left the place and now lives in Punjagutta, saying that she’s recuperating from her bad experiences. And she wasn’t the only one. Her flatmate, too, had severe random twitching all over her body from the day she shifted to that house.

Eventually, she ended up in the emergency ward of a hospital. And doctors couldn’t analyse what exactly was wrong with her.

Another young advertising professional, who lived in a shared flat near Kamaan, shares, “I shifted to this cozy room overlooking a garden. I was really happy till I started feeling some presence in my room, losing my sleep for no reason. I’d hear doors opening and closing when there was no one around. Or sometimes I would feel someone whispering gibberish into my ears as I ate or read a book.”

In due course of time, she lost her dream job, her relationship was on the rocks and she was diagnosed with insomnia. Ratul, a marketing guy in his mid 20s, shares, “I had friends living in a rented apartment over there. Sometimes, we’d stay a bit longer and would go out for walks.

During hot months of April-May, we used to feel chilling shivers together, especially at night. The street lights would go on and off. We often noticed silhouettes moving in the God-forsaken shamshans. Once we followed the shadows, only to notice that the ground was wet which dried up as soon as we stepped in. I have stopped going in that area ever since.”

There are more such example or tales of horror, but why do certain people feel it and not all? At Amrutha Valley, Zara later came to know that the complex had witnessed suicides, murders, rape, raid, and people going mad for no reason.

So is it too much of negative energy at one place? Says Dr VR Veeramaneni, a noted Vaastu expert in the city, “We divide an area into 16 parts according to Vaastu principles. The area between 280 degrees to 300 degrees from the centre of the house is measured with compass.

Then it’s ascertained who sleeps/sits there, what does the person feel etc. Sometimes, because of the negative energy, the person suffers from depression and might even weep. This particular area is called Weeping Area. Now, if this isn’t resolved according to the rules of Vaastu, the person will suffer.”

He advises balancing the five elements in an area with human body, which is also composed of the same elements.

He cautions, “If one element is affected, the entire system gets affected and gives improper results.” #KhabarLive