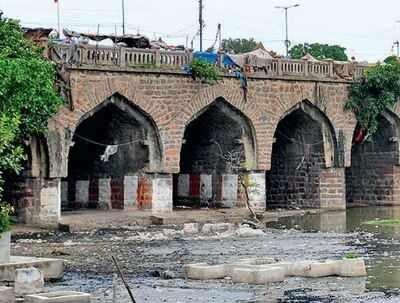 Hyderabad city is known for many stone walls, which were brought down during the Mughal conquest. There were new ones constructed in their place during the Qutub Shahi rule. Many of these walls were destroyed during the Musi floods in the year 1908 and Puranapul Darwaza is one such wall that had survived.

aIt was constructed in the 15th century, and currently Telangana Heritage has undertaken extensive conservation works to preserve this heritage structure of Hyderabad’s Old City. In fact, Puranapul is considered the first bridge of Hyderabad.
The gate near Puranapul Bridge is gradually losing its prominence as the authorities turn a blind eye to its plight.
The bridge that once united two eternal lovers from either side of the Musi has only an amusing tale of romance to boast of today. What was actually called ‘Pyarana Pul’ (Loving Bridge) became Purana Pul (Old Bridge) long back. What remains as a reminder of the glorious past, is one of its gates that stood as the first link across the Musi between Golkonda and Hyderabad, is now neglected by the authorities. Built in 1578 by Ibrahim Qutb Shah along with the bridge the Purana Pul Gate was repaired by Sikander Jah in 1820.
It was repaired again after the disastrous floods in 1908, when the ancient structure was damaged. According to historians, Muhammad Quli Qutb Shah was in love with Baghmati, a Hindu girl who lived on the other side of the Musi River. His father decided to build the bridge so that his son could cross over the river safely to meet his lover. The gate was then constructed. And from then it was also used as a gateway entrance for the outsiders (foreigners) into the city. The foreigners would send a petition seeking permission to enter the city and once they got the permission from the authorities, they used to enter the city through these gates. These gates were used to be closed at nights and only windows were kept open for emergencies.

Actually, there were 14 such gates as per historical records which were being used for the passage and entrance, but to sheer negligence of municipal authorities in the name of inconvenience and traffic plights the public historical structures (gates) have been demolished so these made puranapul gate much more prominent as it is now being one of the two surviving gates of all gates of the city.
Now there is a Kali Mata temple. This temple is also part of the gate .which has images of Rana Pratap and Chatrapati Shivaji. It is said the idol of Mata appeared there and the Nizam who was a patron of Hindus built the temple there.
Unfortunately, the government preferred to turn a blind eye towards this historical structure. The gate is at threat as it developed cracks.
According to the archaeology department, this gate was hit by the great flood on 28 September 1908 and since then it had been protected by the concerned department till 1978. But now as the government has given up the arch and the temple, a classic example of Hindu-Muslim harmony is soon going to become history.
On the other hand, the Puranapul bridge, the name itself acknowledge its historic importance, which ought to have been displayed with pride to tourists, now sports a vegetable market.
Around 200 odd vegetable and fruit vendors conduct their business on the 600 feet long and 35 feet broad bridge by paying up some money to local persons every day. “We are doing business for last 10 years on the bridge. A few years ago we were asked to vacate the place and then we demanded alternate arrangement. Since then no official came to us,” says Sushma, a vegetable vendor.
Digging into the history, the bridge was built in 1578, 13 years before the foundation of Charminar was laid by Ibrahim Quli Qutb Shah to provide better connectivity between the then capital of Qutb Shahi kingdom, Golconda and Machlipatnam. “It is a 438-year-old bridge and was built for better connectivity for the public. The bridge got its name as it is one of the oldest bridges,” said MA Qayyum, a historian.
However, the legend is that Prince Mohammed Quli, the younger son of Ibrahim Qutb Shah came to know that his young son was crossing the dangerously flooding river Musi to meet his love Bhagmati who lived near Charminar and he decided to construct the bridge.
The bridge was repaired on the eve of World Tourism Day on September 27, 2002 and christened ‘Pyaranapul’ (bridge of love) in memory of Mohd Quli Qutb and Bhagmati whose romance led to its construction.
A few years later, again in 2009, the corporation planned to lay cobble flooring on the bridge and make functional the Puranapul Darwaza (gate) which is one of remaining 13 gates that served as the entrance to the city. However, nothing has been done so far. It was closed for traffic as officials felt the bridge got weak and could not handle heavy traffic.
When contacted, department of archaeology and museums officials said that they cannot do anything as the bridge was not placed on the heritage list.
Purana Pul (In English its mean old bridge), built in 1578 AD, Hyderabad, India. built over the river Musi. It is the first bridge ever constructed in Hyderabad and among oldest in South India. It was built during the reign of Qutb Shahi dynasty, for quick travel between Golconda and Hyderabad.It was the entry bridge into the capital of Hyderabad state.The bridge is now defunct, and is used as a flea market. It is cherished as one of the oldest landmarks of Hyderabad.
old stories write, Prince Muhammad Quli Qutb Shah was in love with Bhagmati, a Hindu girl who lived on the other side of river Musi. His father Sultan Ibrahim Quli Qutub Shah decided to build the bridge so that his son could cross over the river safely. However, the fact is that when the bridge was being constructed, young prince had not even reached puberty and the lovestory of Quli Qutub Shah had started after being throned. Actually the bridge is assumed to have been constructed to facilitate the travellers coming to Golkonda for diamond and pearls trade.
The bridge has 22 arches and is 600 feet long and 35 feet broad and 54 feet above the river bed. The bridge was also built out of Sultan Ibrahim Quli Qutub Shah concern for his people and so the bridge was always known as a symbol of love – of a father for his son, of a prince for his beloved, of a monarch for his people. There is an old mosque called as Mian Mishk Masjid close to Purana pul.
The bridge is 600 feet long, 35 feet broad and 54 feet above the river bed based on 22 arches. #KhabarLive
ALSO READ:  Land Encroachments And GHMC Plantation Works Halt Historic 'Mir Alam Lake' Development in Hyderabad 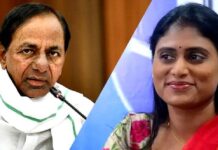