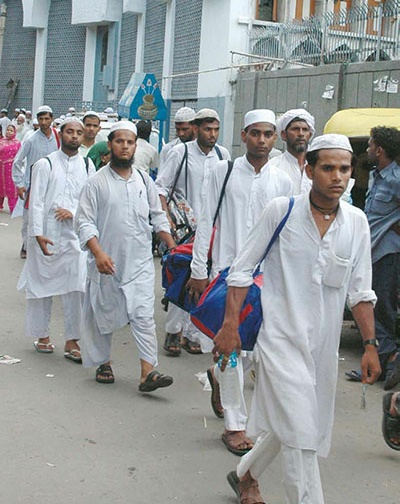 Until the most recent political controversy in India over Tablighi Jamaat, a transnational Islamic revivalist movement, the organisation had existed in obscurity, far from the political imagination of the nation-state. It was in March this year that the spotlight fell on Tabligh after reports on its role in the spread of the novel coronavirus surfaced in public domain.

While the world was dealing with the challenges of the Corona pandemic, the Tabligh was engaged in pursuing their missionary activism by feigning ignorance to the health crisis that was enveloping the globe in unimaginable ways.

This miring of Tabligh with the spread of the pandemic was a result of a gathering in early March with about 2,500 fellow travellers, who had returned from their spiritual patrolling at the Nizamuddin markaz (centre) in Delhi, the global headquarter of the movement. This event led to a spurt of reactions from the right-wing in India, labelling the Tabligh as “Corona Jihadis” with no perspective on the modus operandi of this movement.

It is because of their itinerant nature that Tabligh could have been the carriers and transmitters of the virus, not only in India but to all the places they travelled from the first detection of the COVID-19 case in December 2019 to the surfacing of the controversy in March 2020. This led Tabligh to become the new Aunt Sally for those who found another face of Islam and Muslims in their politics of hate. The public domain, including some sections of media, is scattered with hate comments that demonise Muslims as a community and reinforce mythical narratives about Muslims “spitting in their food” and “producing more children”.

In this peddling of mythical narratives, the Tabligh emerged as a new scapegoat thereby exposing the deeply entrenched communal polarisation in India, the roots of which can be traced back to the late 19th and early 20th century British India, a period of social religious reform across political communities.

Tablighi Jamaat emerged as an offshoot of Deoband in 1926 in response to the Christian missionary and Hindu Shuddhi Sangathan movements. Since its emergence, Tabligh has claimed to be a self-funded and ‘apolitical’ movement insisting on maintaining a quietist position on questions of politics within the broader realm of Social Islam. This brings us to the bigger of question of Social Islam and how is it different from Political Islam.

The ‘apolitical’ piety that Tabligh claims to preach fits into the broader discussion on Islamic Revivalism, which constitutes both Social and Political Islam. While Social Islam takes a bottom-up approach towards Islamizing the society with individual as the unit of reform, the Political adopts a top-down approach starting with capture of state power and then gradual trickling down to the society.

Unlike the Political, the Social in Tabligh starts with Islamizing the society. Their first target is to bring back the non-Tabligh Muslims or the “lesser Muslims” to the ‘true’ and puritan version of Islam as practiced by them. Their notion of purity has to do with the rejection of the ‘other’ that includes both the non-Tabligh Muslim as well as the non-Muslim.

The attempts to include non-Muslim in their larger agenda of reform, the Tabligh is also seen as a proselytising group making inroads in the non-Islamic world. In this quest and call to preach, Tabligh’s politics of proselytism becomes clearer, despite the group’s insistence otherwise. Since Tabligh is seen as a retreat from politics to social in India, concentrating on individual piety and social reform, we cannot overlook the politics of silence and distancing that it consciously maintains.

In writing about the Social aspect of Tabligh, it is equally interesting to see the transformation that the organisation undergoes when travelling beyond the Indian borders towards Pakistan. The transnational character of this petite bourgeoisie movement transforms the movement, depending upon the political boundaries and communities it works with.

While the social in Tabligh is specific to India, it takes political overtures in Pakistan, playing an important role in institutions like the army and the Pakistani cricket team that was once considered the “paragon of modern Muslims.” Pakistani Journalist Amir Mir had observed in early 2007 that the Tabligh has had a negative influence on the national cricket team, where “‘Islamic beards’ are sported as an advertisement of their faith”.

The tendency to mix religion with secular affairs of life is indicative of Tabligh’s influence on the state and the society. This transformation of the Tabligh raises questions about what led to its politicisation in Pakistan? Did the ‘Islamic’ character of the Republic and the allegiance to its ideology by the Muslim majority shape Tabligh’s transformation from social to political?

In the case of Pakistan, it goes back to the 1970s when General Zia-ul-Haq’s military regime instructed the soldiers and officers to attend Tablighi Jamaat classes. It was during this time that Tabligh rose to prominence in Pakistan. At the same time in India, no religious movement received political patronage.

The democratic and secular character of India defined the nature of the movement that limited itself to the social realm. While this may be partially true, the minority character of the movement in Hindu Majority India can also be seen as a factor in confining Tabligh to the Muslim social sphere.

Despite this confinement and limitation in Tabligh’s Islamizing articulation, it bears political implications by adhering to a conservative and restrictive gender ideology of segregation as well as espousing cultural social separatism in pluralistic societies like India. The first generation of Tabligh, including the founder of the movement Muhammad Ilyas Kandhalvi, articulated the ideology of ‘self-reform’ in the face of a perceived moral decline of Islamic religious tradition.

In this quest for ‘social-reform’, the onus fell on the women of the community with the patriarch of the movement Maulana Ashraf Ali Thanawi laying down rules for a ‘Tablighi way of life’ that insisted on strict segregation of the two genders, categorising women as “mehkoom” (subordinate) and men as “hakim” (masters). Thanawi’s misogynist approach had a visible bearing on the Tabligh, where women work as agents of their own subordination. His compendium on the production of ‘pious’ female selves, titled Bihishti Zewar [Heavenly Ornaments, 1905], is found in every Tabligh household and serves as the ‘sacred’ scripture along with other prescriptive texts written by the patriarchs of the movement.

The women in Tabligh are denied access to the sacred scriptures of Islam, the Qur’an, because Thanawi believed that women were “less intelligent” (kam aql) and emotional, which made them incapable of understanding the message of god. Tabligh is the first such Islamic orientation that discourages women from accessing scriptural knowledge of the faith.

Moreover, Tabligh’s politics is not limited to the household in maintaining the asymmetry of power in gender relations and denying women access to the scriptures but is also seen to operate in inter-communal relations. The Tabligh calls for a conscious cultural distancing with the non-Muslims, invoking the ‘purity of the ummah’, which is now limited to the Muslim community. This parochial idea of the ummah is different from the early conceptualisation of the term in the Constitution of Medina that the Prophet had drafted after his Hegira (migration) from Mecca to Medina in 622 AD.

This early concept of ummah wahida (single community) was a multi-tribal and multi-faith community, membership in which was premised on three important elements – honourable behaviour, mutual cooperation, and the avoidance of treachery. However, this pluralist connotation of the ummah distorted over time with the spread of the realm of Arab-Islamic empire and emergence of different Islamic orientations, their interaction with one another and with the state.

With Tabligh’s emphasis on cultural distancing to avoid acculturation and the patriarchs monopoly over scriptures like the Qur’an and the Hadith, is Tablighi Jamaat on its way to assert itself as another variant or sect of Islam? #KhabarLive #hydnews