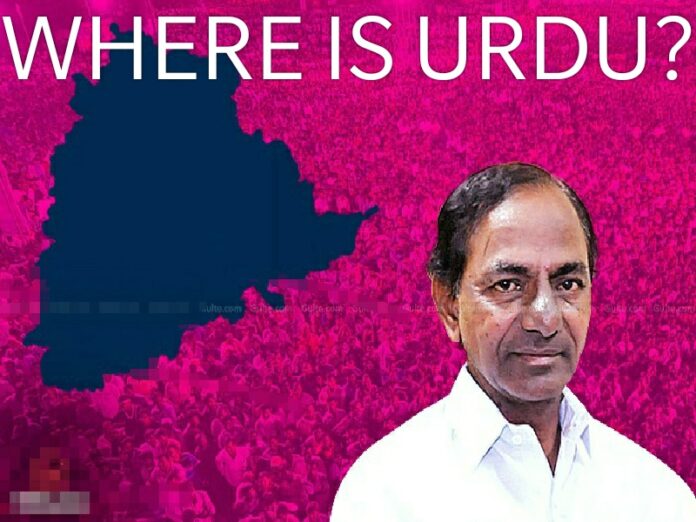 When the newly formed Telengana State in one of its first policy decisions made Urdu as its first official language along with Telugu. In the Nizam area, imposition of Urdu had played a divisive communal politics and unless the political class acts with responsibility the danger of communal polarisation in Telangana is real.

Urdu is not the mother tongue of all the Muslims in the country. Only about 12 to 13 percent of population in the newly born southern state of Telangana, speak Urdu.

The current political leadership of the newly born State had apparently ignored the history of Urdu during the Nizam era and in this process unwittingly compromised with the loyalists of the former Muslim ruler to replay the “Urdu Politics” that is likely to create a wedge between Telugu speaking majority and that of the smaller group of Urdu speakers.

Situation Before Independence:
Before Independence Telangana was one of the three linguistic regions namely Telugu, Marathi and Kannada, of the princely State of Hyderabad under the rule of the Nizam. The region was even called Telugu Angana (where Telugu was spoken) to differentiate it from the Marathi and Kannada speaking areas of the princely state.

The then ruler chose Urdu as the official language both in politics and education. This was seen by the majority Teleugu speaking people as a diabolical plot to suffocate the voice of the majority of the locals, their language and the culture. The political manifestation of Urdu created a communal divide and continued to be a major challenge to the social harmony in the region.

Notwithstanding the fact that Urdu failed to take roots in the rural areas of Telangana in view of its snobbish aversion to native Telugu language, its primacy over Telugu remained a constant source of irritant to the native population that perceived it as an instrument of hegemony. Even though a section of the urbanised group in the region accepted this alien language for their economic self interests, this linguistic dominance over Telugu sowed the seeds of communal polarisation from the beginning.

Urdu after the liberation of Hyderabad State:
With the end of the Princely State of Hyderabad that ended the dominance of the unruly and blatantly communal behaviour of Razakarsand after its amalgamation with India, the role of Urdu declined with only 7.8 percent of the population speaking that language. Urdu was also removed from its official status as the dominant language. Telugu, the language of the majority of the people assumed importance and was declared as the official language only after the historical agitation in 1950s and the formation of Andhra Pradesh subsequently.

The Nizam loyalists who were lying low initially gathered enough strength to coerce the government of the state to declare Urdu as the second official language in the districts that had a sizeable Urdu speaking population.

By and large, except Jamat-e-Islami Hind the majority of Muslims were found to be indifferent to the agitation for Telangana as separate state. President of All India Majlis-e-Ittehadul Muslimeen (AIMIM), known as the main political voice of Muslims in Hyderabad had also argued before Srikrishna Committee against the creation of Telangana. As far back as in 2006 the MIM had even demanded a separate state for Urdu speaking people on the plea that “When there can be two Telugu speaking states in the country, why can’t (there) be an Urdu state or at least a union territory”.

After the bifurcation of Andhra Pradesh and the creation of Telangana when the numerical strength of Muslims increased from about 8% in united Andhra Pradesh to over 12% in the new state, the MIM demanded the status of Urdu at par with Telugu. Strategically, the Muslims also chose to put forward their other demands like reservation for the Muslims. Some news paper reports also reveal the mind of Islamist politicians who had demanded a Muslim as Deputy Chief Minister and later home minister of the state.

The strategy of the Islamists in the State is certainly to revive their position to the old Nizam days. This is the lurking danger the new State may witness in the next few years. While focussing on the development of the new State, it should not again resort to pampering a section of the community for their vote bank. At any rate this should not be the beginning of a communal politics that had dogged this region in Nizam’s days.

It is an irony that the Telugu which precipitated the re-structuring of Indian states has been forced to lose its linguistic primacy in the state just to appease a minority group who had succeeded an getting equal status to Urdu which is spoken by only about 12% of population. In trying to restore the pride of Nizam days, the Islamists are once again said to have reached a position to pose a challenge to native Telugu. Except Jammu & Kashmir, no state in the country has given the status of first official language to Urdu.

The Kashmir Case:
We must turn to the case of Kashmir to see how imposition of an external language has killed all the local languages.

The language demography of Jammu & Kashmir suggests that Kasmiri is its principal language that has the largest number of speakers and ranks first among the mother tongues of the State with Dogri in second and Gujari in the third position. But it was the political, linguistic and cultural assertion of Urdu that the State Constitution recognised it as first official language and pushed the native mother tongues to the status of regional languages.

The Constitution did not even give equal official status to the native languages which have many more speakers than Urdu and thereby debarred them from getting equal facilities for their development. It appears that there was an organised conspiracy of political-bureaucratic elite of the state to obstruct the growth of Kashmiri and other local mother tongues.

Although the Kashmiri language forms the core of much publicised concept of ‘Kashmiriyat’ it was never given due importance when Urdu was recognised as first official language. The the 1941 Census listed Kashmiri, Dogari, Punjabi, Rajasthani, Western Pahari, Balti, Ladakhi, Shina/Dardi and Burushaski as the main language spoken in the State but usage of Urdu had official patronage. So much so, even the Sharda script in which Kashmiri was written was totally ignored to the extent that the natives stated writing their personal letters in Kashmiri only in Arabic script. In fact the official imposition of Urdu over the cultural tradition of the natives was the calculated policy of the political leadership to subvert their indigenous linguistic and ethno-cultural identities.

A study conducted by the Muzaffarabad based scholar Mohsin Shakil reveals that in the State of Jammu & Kashmir, “Kashmiri is spoken by nearly 35 percent people followed by Pahari-Pothwari with 24 percent and Dogri with 18 percent speakers. The survey suggests that there is a decline in the number of active speakers of regional languages, possibly due to the influence of English and other languages (particularly Urdu) in the region”.

Like cultural subjugation of Telugu in Hyderabad Princely State, the cultural and linguistic subversion was deliberately carried out by the Islamists in J & K to “”subsume the Kashmiri identity of Kashmir by a Pan-Islamic identity” after “tampering with the racial and historical memory of an ethnic sub-nationality through a Pan-Islamic ideal”. Kashmir was thus projected as “an un-annexed Islamic enclave” for its secession from the secular and democratic India.

In the first Census after partition in 1951, Muslims in various Indian States registered native languages as their mother tongues but with a view to identify Urdu as a part of their cultural identity, they started opting for this language in 1961 afterwards as mother tongue.

Pampering Politics?
The decision of the state government is generally viewed as a part of pampering politics due to the pressure of the organised efforts of Nizam loyalists who have used Urdu as a political instrument earlier and are still carrying a design to re-establish the supremacy of this language over the native Telugu.

In a survey on the socio-economic and political ground reality of Muslims in Telangana carried out in March 2014 just two months before the creation of this state on June 2, 2014 observed: “The new aspirations of the Muslims for socio-economic benefits and political representation is being viewed by the dominant community as “aggressive” re-assertion by the Muslims, who were otherwise dormant and subdued in the integrated state of Andhra Pradesh”.

The problem of the Muslims in Telangana as reflected in the survey is their feeling that they belonged to the ruling class and thereby they are not ready to accept the reality of their number in a democratic political set up.

Urdu- perceived as the “ruling language”:
The Urdu agitation in the early twentieth century which sowed the seed of partition of Indian sub-continent has a historically proven divisive record. It was the declaration of Urdu as the national language of Pakistan that caused a major agitation in East Pakistan in early 1950s that led to the partition of the newly created Islamic state of Pakistan and birth of Bangladesh.

Both before and after Independence Urdu has been a part of Muslim politics in India. Although, with sixty percent vocabulary of Persian and Arabic synthesized with Khadi Boli (Hindi), Sindhi, Punjabi, Braj Bhasa and Rajasthani, it was born as a lingua franca for the interaction of the soldiers of Muslim rulers with the natives but it was deliberately not allowed to develop in the linguistic and literary tradition of this land as happened to the language of the previous invaders like the Huns, Kushans and others with a view to identify it with the separate identity of Muslims. It was exclusively written in Arabic script which created major hindrance in its development as a language of the masses.

Thus, despite the fact that Urdu was born in North India, in view of its separatist character, non-Muslims with the exception of those in the court of the Muslim rulers took it as a foreign language. Similarly, Urdu failed to make its dent in South India except in the administration of the princely state of Hyderabad.

Although, Urdu does not have an Islamic heritage, Muslim leaders of Telangana identified it with the socio-religious identity of the community for restoring its status and political strength that it had during the rule of Nizam.

In view of the divisive role of Urdu in playing the part of communal polarisation, its linguistic equality with Telugu is not only an insult to the language of the largest majority in the state but also a threat to widen the politico-linguistic rivalry and ethnic conflict that had cursed this region during the reign of Nizam.

The political leadership of the state needs to have a positive and responsible attitude towards the native language which was ignored during the Nizam era. Urdu should not be made as a tool to revisit the Nizam era in Telengana. #KhabarLive #hydnews