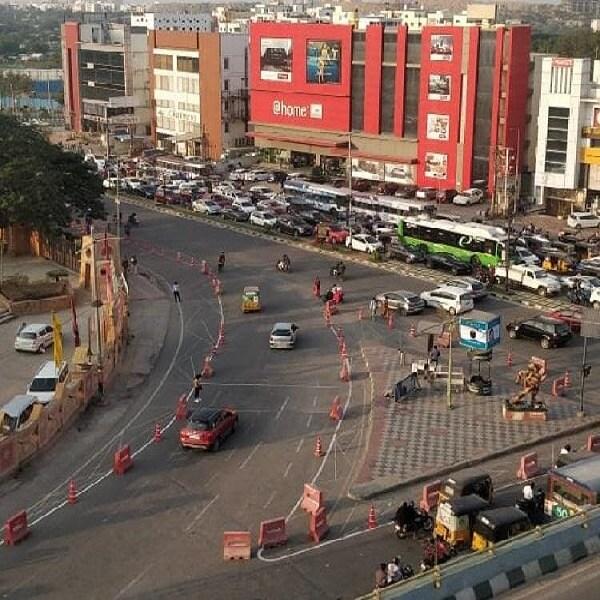 Getting stuck in traffic at the Cyber Towers junction in Hyderabad IT Corridor is a routine affair. To help mitigate the problem, the Cyberabad Traffic Police have taken help from road and transport experts and structural engineers to redesign this critical intersection.

The intersection at Cyber Towers has been redesigned on an experimental basis by the World Resources Institute India (WRI). The pilot project will be monitored by the Cyberabad traffic police for the next three weeks. The Cyber Towers junction connects Madhapur and the rest of Hyderabad to the Hitec City and localities such as Kondapur. The junction also connects JNTU to IKEA, Raheja Mindspace and localities such as Gachibowli.

During peak hour traffic, the junction witnesses about 12,400 passenger car units per hour and pedestrian movement of 5,000 people per hour, say researchers with WRI.

After three weeks of observation, the GHMC will take a final call on whether the intersection redesign has helped reduce traffic congestion and streamlined pedestrian movement. If the redesign is approved, funds will be allocated for the civic works required to make the new changes to the intersection permanent, an officer with the Cyberabad Traffic Police told #KhabarLive.

Transport researchers studying the vehicle movement at the Cyber Towers junction observed that the two-lane road became three or even four lanes due to lack of road discipline. The current design of the junction also leaves little space for pedestrians to cross the road, with pockets of space being occupied by share autos on the Cyber Towers side of the junction.

Researchers found that the side lanes connecting Kothaguda to JNTU are also sparsely used by motorists as there already exists a road linking the two a few hundred meters before the intersection.

“We have closed down that side lane, the aim is to convert it into a bus bay. This will help decongest the traffic coming from Mindspace towards JNTU,” says Tarun George, a Transport Consultant with WRI who is overseeing the project.

The overall intersection ratio at the Cyber Towers junction has been reduced by 40%. This space has been marked off with barricades to improve pedestrian safety. The barricades have also helped reduce the speed of the vehicles approaching the intersection, says Tarun.

The idea of reducing the intersection ratio is to make lane alignment consistent. “We don’t want to create multiple lanes, nor give residual spaces,” Tarun adds.

So does the increased space for pedestrians mean less space for vehicles? The transport researcher points out that the redesign does result in reduced carriageway for vehicles, which will increase queue length. However, the design would also force drivers to follow lane discipline at the intersection.

“Thus the number of vehicles passing through the signal will also increase. A streamlined flow is better than a chaotic flow of traffic,” says Tarun, adding, “We will be studying this for the next three weeks and see the correlation. We have already successfully done two to three intersections in Mumbai and Pune. This is the first time a pilot is being done in Hyderabad.”

Speaking to #KhabarLive, Assistant Commissioner of Police (Traffic) A Chandrashekar said, “If the road is for two-lane when it comes to the junction, it becomes three or four lanes. This is the same problem in every junction. When the signal turns green, the rate of discharge of vehicles is very less and there is congestion due to lack of lane discipline. With the new design, we expect all vehicles to follow the same speed and thus more vehicles will cross the junction. Let’s see what happens in the coming weeks.” #KhabarLive