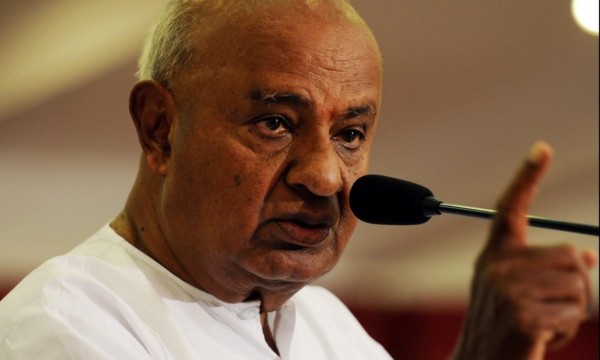 In 1996, Deve Gowda was elevated to lead the United Front government at the Centre. That year marked the beginning of the Janata Dal’s decline in Karnataka.

In the past few weeks, an overwhelming consensus has emerged that Karnataka is heading towards a hung assembly, with both the BJP and the Congress estimated to get around 80 to 90 seats in the 224-member house. And in such a scenario, the remaining numbers needed to reach the magic figure of 113 would not be possible without the Janata Dal (Secular) or JD (S).

However, in our opinion, as the campaign picks up steam, one of the two national parties will gain momentum, leaving the JD (S) far behind — a party with a marginal role in Karnataka politics.

What led to the decline of the JD (S) in Karnataka? The answer lies in understanding the historical pattern of party system evolution in the state. The JD (S) is a splinter group of the erstwhile Janata Dal (JD) and, in some ways, the decline of JD in Karnataka politics also aided the rise of the BJP in the state. The Janata Party (precursor to both the BJP and the Janata Dal) was the Congress’ main challenger in the state in the 1980s. The BJP was formed in 1980 and the JD in 1988. In the 1989 assembly election in the state, the Janata Party won 11 per cent of the votes, the JD won 27 per cent, and the BJP got merely four per cent.

How did the BJP manage to become a party of 40 per cent with a starting vote share of four per cent? The Ram Mandir agitation and its aftermath led to communal violence in many parts of Karnataka. The Hindu-Muslim riots of October 1994 in the Hubli-Dharwad region and parts of Bengaluru, a few weeks before the elections, helped the BJP expand its footprint in the state. Rajiv Gandhi’s decision to sack Veerendra Patil, the CM and a member of the Lingayat community, also helped the BJP, and its vote share increased to 17 per cent.

The JD managed to win the majority of the seats with a vote share of just 33 per cent largely due to a vertical split in the Congress, with former CM Bangarappa’s party winning eight per cent of the votes. H.D. Deve Gowda became the chief minister, sidelining Ram Krishna Hegde, who headed the Janata Party government in the state in the mid-1908s. In 1996, Deve Gowda was elevated to lead the United Front government at the Centre. Paradoxically that year marked the beginning of the JD’s decline in the state.

How did Deve Gowda, once the all-powerful leader of Karnataka, get confined to one community and a few districts in the state? The expulsion of Hegde from the JD in 1996 led to a decline in the party’s support base among the upper castes. Then, in 2006, Siddaramaiah, who considered himself Gowda’s successor, walked away from the JD (S), with his lower-caste support base, to Congress.

After the expulsion, Hegde undertook a mass-contact programme in eight districts of the Lingayat belt in north Karnataka and four districts of the Vokkaliga belt in south Karnataka. In 1998, his newly formed political outfit, the Lok Shakti party, allied with the BJP for the Lok Sabha elections. The alliance emerged as the largest player in the election with a combined vote share of close to 40 per cent. In 1999, former chief minister J.H. Patel’s decision to join the BJP’s National Democratic Alliance (NDA) led to another split after Deve Gowda opposed the move and formed the JD (S). While Patel and Hegde came together under the banner of Janata Dal (United), the then deputy CM Siddaramaiah joined the Gowda faction.

While the Congress won the election, the BJP, by now, had emerged as the second pole of Karnataka politics. With the sudden demise of Patel in 2000 and Hegde’s withdrawal from active politics (and subsequent death in 2004), their support base largely shifted to the BJP. The BJP’s vote share increased from 20 per cent in 1999 to 28 per cent in 2004, and that of the JD (U) declined from 13 per cent to two per cent in the same period.

Though the BJP emerged as the single largest party in the state, the Congress and the JD (S) came together to form the government. The JD (S) withdrew the support from the Congress in 2006 and Deve Gowda’s son Kumaraswamy became the CM with the help of the BJP.

Siddaramaiah’s decision to part ways with Gowda and decline in Muslim support after the alliance with the BJP has left the JD (S) high and dry. The party now has a small following among most communities except the Vokkaligas, and is virtually absent in more than half the state.

ALSO READ:  Why TDP Is Getting Ruined By Internal Conflicts In Andhra Pradesh?

Since then, the JD (S) has been on continuous decline — 19 per cent of the vote share in 2008, and 14 per cent and 11 per cent in the 2009 and 2014 Lok Sabha polls, respectively. The BJP, on the other hand, increased its vote share — 34 per cent in 2008 and 43 per cent in 2014. The JD (S) leadership is aware that its 2013 vote share of 20 per cent is not a true reflection of the party’s strength as this was largely due to the vertical split in the BJP, with Yeddyurappa and Sreeramulu contesting separately. Both are now back in the BJP. Furthermore, the BJP is making serious attempts to win a share of Vokkaliga voters, the main support base of the JD (S).

The JD (S) has become pale shadow of its former self. Its last-ditch effort to remain relevant through a pre-poll alliance with the BSP and support from the AIMIM is unlikely to help the party. In fact, this strategy of wooing Dalits and Muslims may even backfire on the ground and help the BJP. Perhaps the JD (S) could learn from the BSP’s performance in the 2017 assembly elections in Uttar Pradesh following a very similar strategy. #KhabarLive