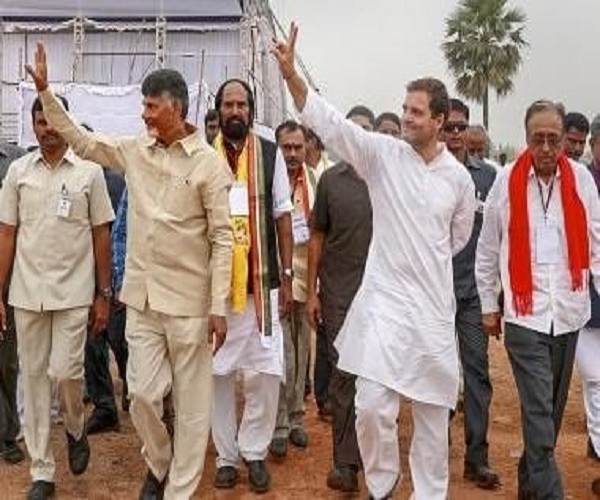 The Mahakutami or grand alliance led by the Congress with TDP, CPI and Telangana Jana Samithi (TJS) ran an effective campaign across the state, giving sleepless nights to the TRS, which was hoping for an easy win for the second time.

The high-decibel public campaign for the Telangana Assembly election ended on Wednesday evening. It was a three-month long campaign for the ruling TRS led by chief minister K Chandrashekar Rao, who advanced the elections by dissolving the Assembly nine months before its five-year term got over.

The Congress, which started the campaigning only a month ago, matched the ruling party’s campaign both in impact and reach.

Ailing UPA chairperson Sonia Gandhi addressed her only public meeting in this election season in Telangana. She also released a recorded video message requesting the people to elect ‘Mahakutami’ on Tuesday.

The Mahakutami or grand alliance led by the Congress with TDP, CPI and Telangana Jana Samithi (TJS) ran an effective campaign across the state, giving sleepless nights to the TRS, which was hoping for an easy win for the second time.

According to Congress and TDP leaders, the fight for Telangana is between official Mahakutami led by them and unofficial ‘Mahakutami’ led by TRS with the backing of BJP and AIMIM of Owaisi brothers.

Congress president Rahul Gandhi addressed over a dozen public meetings termed MIM as the ‘C’ team and TRS, which itself was the ‘B’ team of BJP, triggering an uproar.

The BJP, which had won five seats in 2014 elections with TDP support, is contesting in all 119 seats on its own. PM Modi, BJP president Amit Shah and UP CM Yogi Adityanath campaigned aggressively attacking the Mahakutami.

For them, a win for Rahul-Naidu combine would be bad news at the national level, and expectedly, they focused more on them and less on TRS during the campaign.

Though CM KCR claims that TRS will win over 100 seats decimating the ‘Mahakutami’, no one is taking it seriously.

Political analysts dismiss it as just bravado and mind games. They feel that predicting Telangana Assembly results would be a nightmare for pollsters.

Well known political observer K Nageshwar told News18 that it would be almost impossible for anybody to predict the results.

“It is a closely fought election. Both Congress and TRS are on equal footing. Predicting the results is a nightmare” he said.

The Telangana sentiments which brought TRS to power in 2014 is almost invisible this time. The voters are talking about everyday issues and sentiments don’t seem to have any impact on them.

What is making pollsters job impossible is arithmetic versus perception.

The arithmetic favours ‘Mahakutami’ and the perception still favours TRS.

In the 2014 elections, the Congress and TDP together had polled 39.5% as against 36% of TRS. In a multi-corner contest the TRS romped home by bagging 63 seats. The Congress won 21 and TDP won 15 seats respectively. The BJP won 5 and MIM 7.

The Mahakutami is eyeing votes from the powerful Reddys, SCs, Muslims and “settlers” from Andhra Pradesh to unseat KCR. The SCs seems to be backing the Congress this time. The Muslims are also divided.

KCR, who hails from a miniscule Velama caste, is fighting the battle on his welfare schemes. The Backward Classes are likely to back the TRS with some going back to TDP.

There have been over a dozen pre-poll surveys predicting all kinds of scenarios.

A survey done by former Congress MP Lagadapati Rajagopal who has accurately predicted the results of many elections in the past claims that ‘Mahakutami’ is ahead.

Another survey purportedly done by the intelligence agencies gives 48 seats to TRS and 46 seats to ‘Mahakutami’.

If the TRS wins again it will be a death blow to Congress-TDP alliance. But if the Mahakutami wins, it would be a bigger blow to BJP than to TRS. Because it could be the proof all regional parties need to come together and fight the 2019 Lok Sabha under a single platform. #KhabarLive#TelanganaElections2018