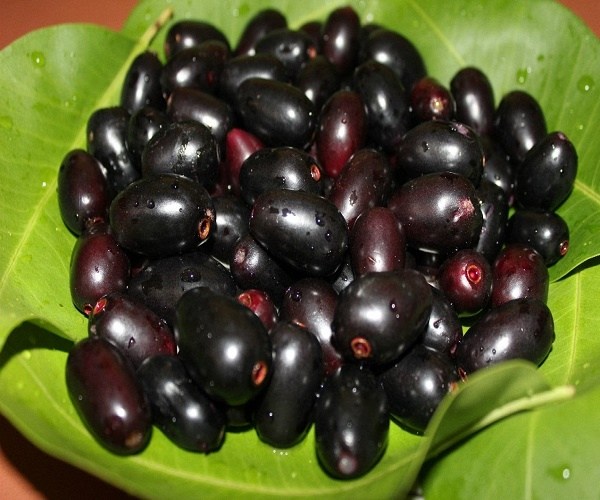 The fruit, bark, seeds, and even the leaves, are anti-diabetic. In fact, all parts of the tree have medicinal properties. Laden with purple fruits that stain the sidewalks and our mouths, the jamun tree is a favourite in Indian cities. It is found across most parts of the country and is native to the Indian subcontinent.

The tree is central to the cosmology of Hinduism, Jainism and Buddhism—three major religions that took root from this region. Though they differ in details, all three describe the ancient world as being composed of a number of dwipas (island continents). One of the most important of these islands is the Jambudwipa, the island of the jamun trees. In the Vishnu Purana, Jambudwipa, which was the central of seven islands, is described with jambu (jamun) trees that bore fruits as large as elephants. When the ripe massive fruits fell from the trees on to the mountain tops, the juice flowed from them in torrents, forming the Jambunadi. This river of jamun juice flowed through the island and was enjoyed by all its inhabitants.

The jamun tree is not just characteristic of ancient and mythological India. It appears in the chronicles of many travellers, both Indian and foreign. Ancient Sanskrit medical texts by Charaka, Susruta and Vagbhata describe the use of the jamun as a cure for vomiting in babies, spider bites and an assortment of other diseases and disorders. In the Ramayana, Rama and Sita are believed to have feasted on jamuns during their long years of exile.

Jamuns played a prominent role in the life of the second Avvaiyar, a revered Tamil poetess-saint. An often-told story of Muruga (Kartikeya) begins with Avvaiyar sitting under a jamun tree, when she sees a young shepherd. Feeling hungry, she asks him for some fruit. He responds by asking ‘Sutta pazham? Sudatha pazham?’ (Do you want the fruit to be hot [roasted] or cool [uncooked]?). Thinking that he was a simple, uneducated boy asking her a silly question, Avvaiyar responded that, of course, she wanted the cool, uncooked fruit.

ALSO READ:  How To Avoid Covid Scare In Diabetics?

When he shook the branches of the tree, the fruit fell on to the ground below. She picked up the fruit and blew on it to remove the sand. He laughed and asked her, ‘What happened? Why are you blowing on the fruit to cool it? Is it hot?’ Struck by the ease with which he had tricked her, she asked who he was. The shepherd boy revealed himself to be Lord Muruga.

Popular across Tamil Nadu, the story made its way into a classic Tamil movie of 1953 with the same name, Avvaiyar. This encounter with a child, who was not what he seemed to be, led Avvaiyar to begin writing for children. She composed a number of books with insightful sayings for children. These compositions continue to be popular across Tamil Nadu till date, just as the movie Avvaiyar whose scene under the jamun tree continues to be widely watched with close to 500 million views on YouTube.

Avvaiyar’s life-changing encounter under the jamun tree is believed to have taken place sometime in the tenth century CE, during the reign of the Cholas. Well before this, Chinese monk Fa-Hsien, who visited India between 399 ad and 414 ad, mentioned the jamun tree, as did Hiuen Tsang who was in the subcontinent sometime between 629 ad and 245 ad. In 1333, Ibn Battuta described the tree, with fruits ‘like the olive’, black and with a single stone, in Muhammad bin Tughlaq’s Delhi.

Babur, who ruled the areas around Delhi two centuries after Tughlaq, did not think much of the jamun. He was a man of decided opinions, declaring the mango to be the best fruit of Hindustan and speaking highly of the banana. In his memoirs, he acknowledged that the jamun tree was ‘fine looking’, but the fruit, which resembled that of a black grape, ‘has a more acidic taste and is not very good’.

The bitter taste that Babur disliked so much comes from the high tannin content of the fruit. Tannins, or polyphenol, are found in many health foods ranging from the jamun to red grapes, wine, dark chocolate and black tea. They leave a bitter sensation in the mouth and a puckered-up feeling on the tongue by binding with our saliva and drying out the mouth. It is the tannins that give the jamun its peculiar medicinal properties.

Some scientists refer to tannins as a double-edged sword—too much can reduce our ability to absorb iron and vitamins from food and even stimulate some forms of cancer. But in small amounts, tannins are good for us. In fact, they prevent some cancers, protects us from microbial and fungal infections and offer a host of other health benefits. Hence the New Age endorsement of wine, chocolate and jamun as health foods.

Jamun, if you are in the know, seems to be capable of addressing almost every health disorder known to humankind. And it’s not just the tannins at work. The fruit’s purple colour comes from its characteristic pigment, anthocyanins. Antioxidants, anthocyanins are also found in blueberries, cranberries and purple cabbage—all exotic superfoods now being touted as miracle cures against varied diseases such as cancer and dementia.

But there’s no need to go looking for imported blueberries when you have the humble jamun closer to home. Sirka (jamun vinegar), made by leaving jamun pulp to ferment with sugar for several weeks followed by straining, is an excellent salad dressing and offers a healthy home-made substitute to balsamic vinegar.

The fruit, bark, seeds, and even the leaves, are anti-diabetic. In fact, all parts of the tree have medicinal properties. The jamun is used widely in Ayurveda and by traditional healers across the country. The diluted juice can be used as a gargling solution to ward off infections, while the same juice, if applied on the skin and scalp, can be used locally to treat ringworm infections. The pulp can also be used to treat mouth ulcers and gum bleeds.

The bark and the inner hard seeds, once dried and powdered, can fight internal disorders like dysentery. The seeds can also be ground into a paste and used in face packs to treat acne and pimples. The astringent juice of the fruit makes for an excellent ingredient in face packs, but only as long as you remember to wash it off well, else you will be left with a purple-tinged face for a few days.

The jamun is also a tree with high-tech possibilities. Recent research by scientists at the Indian Institute of Technology (IIT), Roorkee, suggests that the anthocyanins extracted from jamuns can be used to manufacture dye-sensitized solar cells at a lower cost.

Another group of scientists at IIT Hyderabad used activated carbon, derived from powdered jamun seeds, to remove fluoride from contaminated water. If this technology can be scaled up and perfected, it can be a low-cost, simple way to supply drinking water to India’s fluorosis-affected villages.#KhabarLive