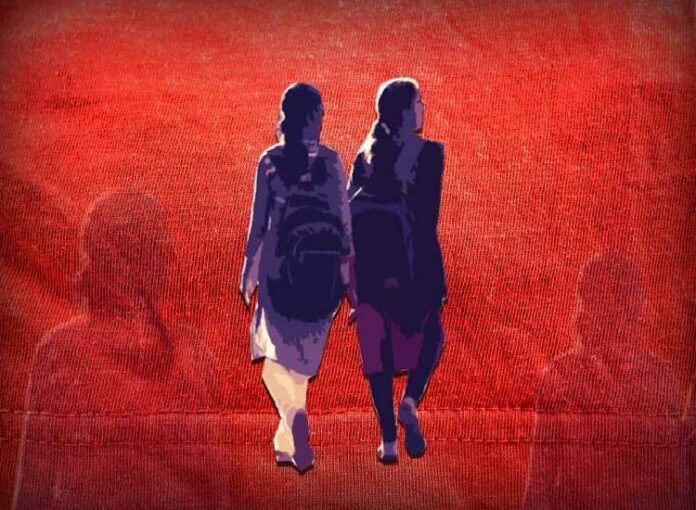 Presuming menstruation is an excuse, most colleges commit human rights violations, and the government needs to step up.

Around 13 years ago, Sowmya, who grew up in Kakinada, was a student at a junior college in Guntur. She was a teenager, studying intermediate (class 11 and 12) while staying at a hostel, away from her family. On a typical day, at all waking hours, she and her friends would either be attending a class, or sitting through supervised study hours. Like her classmates, and thousands of peers across Andhra Pradesh and Telangana, Sowmya was under immense pressure to prepare for entrance tests, to secure admission in a good engineering college.

Though it’s been more than a decade now, Sowmya clearly recalls an infuriating, mortifying incident from her intermediate college days, which clearly amounts to sexual harassment. In the middle of a class, as the teacher droned on, she realised her period had started without warning. She needed to rush to her hostel room, change her clothes and grab a sanitary pad. The keys to her shared hostel room would be kept with the warden, who would ensure the students followed a rigid schedule and only returned to their rooms for limited hours.

When she went to the warden asking for the keys to her room, Sowmya says the warden refused, accusing her of making up excuses to skip class. When Sowmya insisted she wasn’t lying, she recalls being asked to “prove” that she was indeed menstruating, by lowering her pants. “Though I refused, she didn’t listen. Then I was forced to show (period stains),” she says.

Sowmya is not the only student to have faced such harassment. Sarika, who was in a hostel in Hyderabad for a year in 2017-18, also says that it was common for hostel wardens to ask students to show their period stains, before allowing them to go to their hostel rooms.

“Wardens used to be very hard on us. They wouldn’t send students to their hostel rooms during college hours, until they strip and show the stains. Many of my friends have suffered because of this,” says Sarika. “On seeing it happen to my friends, I would be very careful to avoid such a situation. It was horrible to live in that hostel and prepare for NEET,” says the student, who left the hostel after the first year to attend a regular college, and is now about to pursue MBBS.

Many students like Sarika, who attended similar residential junior colleges, say that they had to go through severe anxiety while menstruating throughout their two-year stay.

Presuming periods are an ‘excuse’

While Sarika and Sowmya spoke of students being asked to strip, in many other colleges, students say that wardens and other staff would simply not believe them when they said they were on their period, and need a break. “They would refuse to believe us. They would ask with sarcasm if we were telling the truth. Their assumption was that we were lying so we could skip class,” Sarika says.

Sowmya says that at the age that young girls attend such junior colleges (around 15-18 years), it is still difficult to identify misbehaviour or harassment. “Once you go to college or start working, it’s different. But in intermediate, we were too young, and we weren’t very comfortable talking about menstruation, even with each other. Moreover, the teaching faculty are mostly men. Only the principal, wardens and junior lecturers are women.”

Yet, the women administrative staff are often insensitive to problems related to menstruation, according to several students, who say that junior lecturers monitoring students during class hours and study hours, as well as wardens, would not allow them to leave class for a few minutes, even when they were in severe discomfort and pain.

Parvathi*, who is from Narsapur in West Godavari, was studying at another similar college in Vijayawada around two years ago. Recalling a painful experience from the time, she says, “I remember clearly that it was a Sunday, because my parents were visiting. I got my period during the class. When I went to my warden and asked her to open the rooms, she refused and sent me to the vice-principal, who asked me to go to the reception, call the principal and take her permission. I was not even able to walk. I fought with them for a while, standing at the same place. Even on seeing that my clothes were stained and that the blood had dripped onto the floor, the vice-principal informed the principal and then finally sent me to the room. I cried like hell on that day. I will never forget that incident.”

While a few students like Sarika say that there’s no point in complaining, a few others have tried to oppose these cruel practices by approaching higher authorities. However, they were only met with lukewarm responses. When Sowmya complained to her principal, she was told that action would be taken against the warden who made her strip. “But to my surprise, I later found out that the warden was actually appreciated for being so ‘strict’”

Like Parvathi, Prathyusha is also from West Godavari. From Eluru, she went to study intermediate in Vijayawada. “The JLs (junior lecturers) wouldn’t even allow us to go to the washroom. They would make us wait for 2 or 3 hours, even if we were in tears, until it was time for the common break. If we were assertive that we wanted to go to our room, they would ask us to take permission from the principal, who wasn’t easy to meet. We would have to wait outside her office in front of others, with stains,” she says, adding that even after finally obtaining permission, students would have to chase after evasive wardens to get the keys to their rooms.

“For all this, they would only give us 10 minutes. If we took a little longer, they would deny us permission the next time,” she says.

Students like Prathyusha say that complaining to higher authorities was futile, since such actions by the JLs and wardens were allowed, and even encouraged by them. “Even if a few JLs would feel sorry and give us permission, they would be reprimanded by the warden,” she says, adding that the wardens seemed to have the principal’s implicit approval. “The principal never objected to the practice, even though many students would regularly go to her seeking permission. That means she was okay with it,” she says.

A few students who shared these problems with their parents say that wardens would try to shift the blame on the students, by accusing them of not working hard in their academics and being distracted.

Ananya*, who attended a similar college in Hyderabad, says that when her parents tried to talk to the warden, they would deny the students’ claims. “They would instead say things like, their daughter is very careless, she has boyfriends and things like that. Even if parents didn’t believe them, they would hesitate to be too confrontational, as they had to leave their child in their care at the end of the day,” she says. Parents would ask them to adjust, as it was “only a matter of two years,” and as these colleges are considered the best shot at cracking entrance tests for engineering and medical courses, says Prathyusha.

Corporate colleges in the Telugu states are notorious for their oppressive culture and the toll it takes on the mental health of students. The stress-inducing environment at these colleges have led to many student suicides over years.

Hostels and paying-guest accommodations often tend to be repressive environments, especially for women. Yet, there have been inspiring, hopeful instances, where young women have stood up to such constraints, and won. Last year, Faheema Shirin, a second-year BA Literature student in Kerala, defied a hostel rule that required women students to surrender their phones for a fixed duration. Faheema, who was expelled from her college, moved the Kerala High Court, and won the legal battle.

In another case, also from Kerala, a third-year undergraduate student named Anitha K Jose moved the High Court against regressive hostel rules, calling them a violation of rights. Around two years later, the court ruled in her favour.

But the students in junior colleges are much younger, and are essentially in high school.

“They’re pretty much children in intermediate. They’re not majors to go ahead and do a lot of things themselves. For them to organise themselves is really difficult,” notes Tejaswini Madabhushi, who founded Hyderabad for Feminism.

“When you look at various campaigns like Pinjra Tod (a Delhi-based movement against restrictive rules for women in hostels and PGs), they were all at least undergraduate students. Some of them were even doing their Masters or PhD candidates. But here, we are talking about kids who are being put through a machine, with no space for resistance,” she says.

There needs to be sustained pressure for reform, from external groups including parents, students’ organisations, as well as the government, says Tejaswini. “Concerned parents could organise themselves as a lobby group and put pressure on these institutions. But ultimately, the government needs to have regulatory measures in place,” she says.

While the Board of Intermediate in both Telangana and Andhra Pradesh does exist to regulate these institutions, and some of these colleges do occasionally face consequences for failing to adhere to standards, most of these institutions have continued to function for several years, with branches across India.

“We are talking about a human rights violation, and the government needs to step up,” says Tejaswini, adding that parents also must be more informed, and consider the different forms of trauma that students face in such colleges, when they consider sending their children to these institutions. #KhabarLive #hydnews