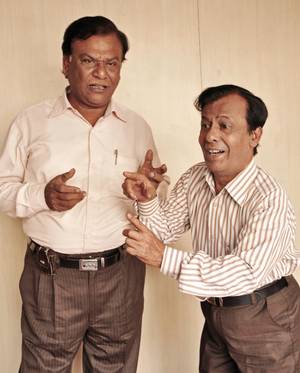 In conversation with iconic Hyderabadi laughter kings – Hamid Kamal and Subhani are in no mood to spare anyone of their razor sharp Hyderabadi humour.

Imagine a modern office for beggars, with a president who decides on their ‘postings’ and the areas where they should beg. The beggars are in so much demand that even a cooperative bank approaches them for a loan! Sounds like a crazy idea? Well, such is the plot of the latest skit Bhikari.com planned by stand-up comedians Hamid Kamal and Subhani — popular known as ‘Dedh Matwale’.

Hamid Kamal and Subhani are as different as chalk and cheese in appearance. “That’s why we are called ‘Dedh matwale’ meaning ‘one and half’,” laugh the duo. As stand-up comedians, they have been making the world laugh with their Hyderabadi humour for 35 years now and have performed in USA, Canada, Australia and all Gulf countries. Peppered with hilarious dialogues, their laugh-a-minute shows are sprinkled liberally with Hyderabadi words like hau, nakko or the typical Aji kahan jaarein, kithi wakhat se boli mein …

They remember a show in New York when they gave their Hyderabadi Hindi a miss. “The way we were speaking Hindi was different and a few people from the audience came on to the stage and told us that they like it only when we speak Hyderabadi Hindi,” says Hamid Kamal.

If their show Dubai Ka Laddu was one of the high points of their career, their recent CD Dedh Matwale Baba (directed by Hameed Alam and marketed by Super Series) has created quite a stir. The storyline is hilarious with a fake baba and various people thronging him to solve their problems. However, the underlying message shown in Dedh Matwale Baba cannot be missed. “There were many media reports about these fake babas and how they were fooling people around. We wanted to create an awareness that one should not fall prey to these babas,” says Hamid Kamal, who is also the writer.

The compliments for their style of humour have been many but their special memory is of comedy actor Mehmood, who came to watch their skit Shaadi Ka Chakkar . “During the interval, he came backstage to appreciate us,” they recollect. They attribute their success to their spontaneous comedy and timing. “Stand-up comedy is God’s gift, and it cannot be taught. You are born with the ability to make people laugh and you cannot copy it,” says Hamid Kamal and adds, “My parents would say: “ Kab tak karega, yeh hasi hasaana. Kuch kaam toh karo. But I feel blessed that my hobby to make people laugh has become my profession.”

They have even been seen on the screen- while they have done cameos in movies like Shyam Benegal’s Well Done Abba , the duo had also appeared in Star One’s Laughter Challenge . Any disappointmentat not making it big in Hindi film industry? “There are no regrets. When you drink Gandipet water, you cannot bow in front of others. A speciality of Hyderabadi artistes is that we are high on humour but never make vulgar jokes or have double meaning dialogues in our shows. We are proud that we have been able to sustain ourselves with our Hyderabadi comedy,” they smile.

Anyone who has travelled in an auto in Hyderabad will endorse Hamid Kamal’s statement. “Unlike Mumbai and Pune where commuters travel in taxis with ease, the Hyderabadi autowaalahs present a questionnaire to their customers,” points out Hamid Kamal. “They ask: ‘ kidhar jaana hai, kitna sawaari hai? samaan bhi hai kya, sirf chodna hai yaa waapis bhi laana hai.

And, after all this, they demand one amount which makes us speechless,” says Hamid Kamal poker-faced. The ace-Hyderabadi comedian is in the hustle-bustle of things as he and his comedy partner Subhani called the ‘Dedh Matwaale’ celebrate 42 years of laughter in Hyderabad.

Hamid and Subhani made a humorous entry when the term ‘stand-up comedy’ was unheard of. Now as the country sees more youngsters entering the fray with their gags, slapstick comedy and punch lines, the two have struck to their brand of asli Hyderabadi humour and make the world laugh with it. “We have always believed in sober and clean comedy. We have never resorted to double meaning or vulgar jokes to attract audiences. We can say with pride that women would be present in more numbers in our shows. Such is our popularity,” states Hamid.

Hamid recalls their first show presented in Ravindra Bharati in 1975. “The tickets were priced Rs. 5 and Rs. 10 and we would try to sell the tickets among our acquaintances. Somehow, the crowd got filled in and it became housefull,” smiles Hamid. Since the day, the group has been presenting a show every Sunday till the year 2000 at Ravindra Bharati! “The high point is that the shows were not free or sponsored. They were all ticketed,” recalls Hamid.

Peppered with Hyderabadi words and oozing Hyderabadi humour, the shows also reflect the happenings in society. “We have always believed in delivering a message but with a pinch of humour. Be it the cricket-crazy nation that we are or youngsters neglecting their studies to have fun… we speak about these topics but in a comic way,” he avers. Their CD Dedh Matwaale Baba depicted a fake baba and how people throng these babas for miracles. “Even educated people visit such babas who take the gullible for a ride. We wanted to highlight the issue,” says the 62-year-old.

Hamid was in Bombay to make a career in the film industry and has contributed to films like Hero Heeralal and Rajkumar Santoshi’s Lajja. He even taught Boman Irani, Ila Arun and Minissha Lamba, the Hyderabadi dialect for the film Well Done Abba. “I could not adjust to the Bombay way of life. People live in small, congested apartments and even make use of balconies like a room with a bed. Here, in Hyderabad, I live in a spacious house. I have travelled to Australia, USA and Canada on my own right as a comedian and that is my identity,” he states.

Now, Hamid plans to create a Youtube channel and upload comedy bits to reach out to the younger generation.

Johnny bhai is the most down-to-earth person one will ever find in the industry. He is a celebrity but has no airs and never forgets his friends. Our association began in the ’80s when we would do stage shows together. We have done shows in Ahmednagar, Sholapur and Nasik. He values friendship so much that he is not charging any fee for the show. #KhabarLive 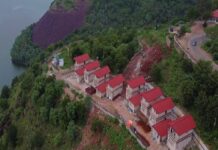