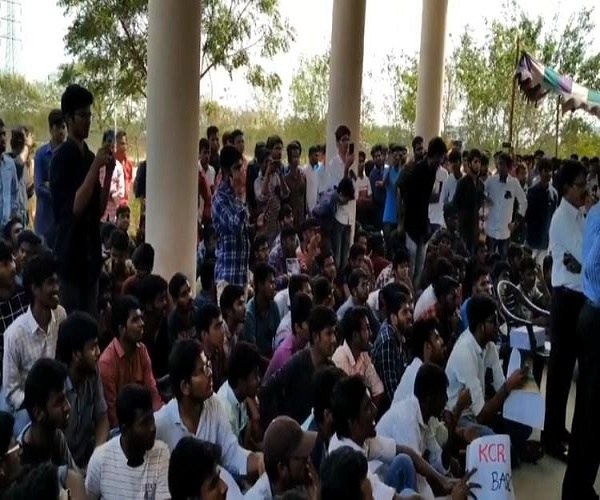 Students of Kakatiya University College of Engineering and Technology have been boycotting classes and protesting for the last three days against poor infrastructure and inadequate staff in the campus. As the protests did not yield a good response, they have also started an online campaign with #save_kucet by tagging both KT Rama Rao (KTR) and K Kavitha, former minister and Nizamabad MP respectively.

The demands of the students include hiring permanent faculty; revamping the labs with latest equipment; building libraries with e-library facility; constructing seminar halls, a sports club, and an auditorium; establishing a placement cell; enhancing security; and laying better roads. Appealing for the same, they wrote to Chief Minister K Chandrasekhar Rao.

The students allege that the college receives close to Rs 35 crore as funds, but they spend a very insignificant amount towards its upkeep. They say that they were cheated by the administration. “During orientation, they said that they have good labs, adequate faculties and several other amenities. However, after joining we realised that we were fooled. None of the things that they promised existed, we were cheated with false promises,” said a student on condition of anonymity.

“Whenever we question about faculty, they respond that they have issued a notification. They have been saying the same thing for the past three years,” he said.

Students claim that the existing 54 faculty are underqualified, and that better faculty need to be hired to improve the college’s standard.

Responding to the tweets, former minister and son of the Chief Minister, KTR assured that he will discuss the issue with the Minister of Education. “Assure you guys that I will take your issue to the notice of Education Minister Jagdish Reddy Garu and VC Garu,” he tweeted.

However, the students claim that despite the assurance of the former minister, so far no authority has come forward with a written assurance of fixing the problems immediately. #KhabarLive