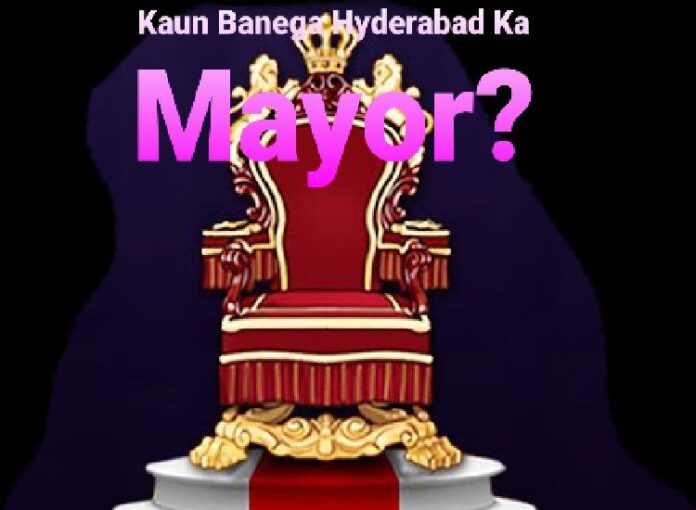 he stage is set for the election of Mayor and Deputy Mayor of Greater Hyderabad Municipal Corporation (GHMC) on Thursday. The GHMC elections had witnessed a pitched battle between ruling TRS and the BJP in December.

The Ruling TRS and opponent BJP locks horns to fight tough with mind games. The absence of an absolute majority has made political parties curious over the Greater Hyderabad Municipal Corporation (GHMC) Mayoral election. This would be the first election after the formation of GHMC, from its earlier avatar as MCH, when political parties are in dilemma over the outcome till the last minute.

In all probability, the MIM is likely to abstain from voting and this would help the TRS to bag both the mayor and deputy mayor posts. TRS emerged as the single largest party and bagged 56 divisions, while BJP secured 48 divisions and MIM won in 44 divisions and the Congress won in two divisions, in the 150-seat civic body.

The BJP’s strength has come down to 47 following the death of one of its members. It has two ex-officio members. To ensure that nothing goes wrong during polling, the TRS has made the minister for MAUD K T Rama Rao, Parliamentary Party leader K Keshava Rao and Minister Talsani Srinivas Yadav as in-charges.

The TRS corporators and ex-officio members will meet at TRS Bhavan in the morning where they will be briefed on the process and from there all will go to GHMC. Meanwhile, the BJP also decided to put up its candidates for both Mayor and Deputy Mayor to expose the “opportunist, dubious backhand deal” with AIMIM.

TRS sources said their Mayoral and Deputy Mayoral candidates names will be given to its members in sealed covers.

In the past, these elections have been unanimous and clear. In 2009, the Congress and the MIM cracked a deal to share the term of mayor for two and half years. As part of the deal, while Banda Karthika Reddy served from December 4, 2009 to January 3, 2012, Mr Majid Hussain served for the remaining period until March 7, 2014.

After the formation of Telangana, TRS won the first elections with a thumping majority by winning 99 corporator seats. Bonthu Rammohan, president of TRS youth, was unanimously elected as the mayor.

Both elections would be held by the voice vote method or by raising of hands by the members present, with 50 per cent of total members having voting rights treated as the quorum.

In the absence of a quorum at the time of election, the meeting and election process would be postponed for an hour by the president officer. If the same position continued, it would be put off for the next day. In the event of elections not being held the next day, the presiding officer will refer the matter to the State Election Commission for further orders.

In the current house, the ruling TRS has only eight seats more than BJP, which has made the Mayoral election interesting. The TRS has won 56 seats and BJP 48 seats.

Cutting across party lines, sources said that a cabinet minister is backing Bharathi Nagar corporator Sindhu Adarsh Reddy for mayoral post while MLAs from Kukatpally and Serilingampally are opposing her. Late P. Janardhan Reddy’s daughter and ward member from P. Vijaya Reddy’s candidature for mayor ward has been opposed by the Khairatabad MLA, while Chintala Vijayashanthi’s bid is being opposed by the Malkajgiri MLA.

ALSO READ:  How 'Nuseir Yassin' Message of Positivity Stems From Privilege In His Vlog 'Nas Daily'?

Sources said that BJP is in constant touch with corporators, who are dissatisfied with the ongoing developments and may surprise the TRS in the GHMC council hall. This apart, Bonthu Rammohan, in his efforts to promote his wife Sridevi, has been constantly in touch with the party high command.

Sources said the Mayoral election “would be a surprise” for all political parties based on the quorum and party strength present in the council hall. They said that the MIM with 44 seats could play a crucial role on the poll day as well.

Meanwhile, as per SEC, if only one Mayor candidate is proposed by corporators, there shall be no election and he or she shall be declared elected unanimously.

The presiding officer will record the number of votes polled for each candidate, ascertained by show of hands. In the event of there being equality of votes between two candidates, the officer shall draw lots in presence of members and the name of candidate drawn first, will be declared elected. #KhabarLive #hydnews