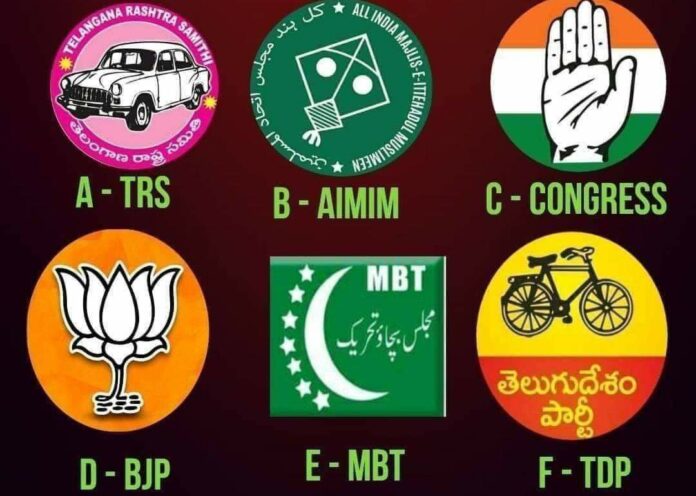 With the GHMC elections round the corner, the time has come for the voter to choose what he wants and who he can choose.

It is also the time to look at the pros and cons of each party so here is a small #KhabarLive analysis for Hyderabadi voters.

Since the formation of Telangana state, the TRS party has shown total dominance in every aspect and their major focus has been on developing the city of Hyderabad in a big way. That way, more than the governance the government policies tend to influence the voter. Given that, TRS has done a decent job in terms of infrastructure and bringing in opportunities.

However, they also had their share of challenges. For starters, the promise that they would give 2BHK houses for the poor has not materialized completely. Incidentally, they happen to be the major vote bank for the municipal elections. So, it has to be seen whether they will give a second chance or not.

The other challenge has been the recent floods. It is clear that the government failed to fix the floods issue where cars got swept away and water came directly inside homes. It also goes to show how corruption has taken over and permissions were given blindly for homes and other structures which resulted in massive encroachment.

But then, if one has to look at the big picture, TRS government will still be in power for three days so bringing in another party to power in the city alone may not help. Moreover, BJP has not done anything for Hyderabad since the last few years. So, all the odds are against TRS’s opponents and they seem to have a comfortable position right now.

The election result of Dubbaka has certainly given a big boost of confidence to the saffron brigade but at the ground level, they don’t really have any significant tool to woo the voters. The max that they can do is use Modi’s image and the National policies.

At one point, BJP had that power owing to the communal tensions in the city and people looked towards the Hindutva party for support. But Hyderabad has changed drastically in the last two decades. Everyone is living peacefully without any riots or issues. So, the only way they can really create a difference is by coming up with some really competent candidates.

The other advantage is the settlers from the North. Today, Hyderabad has a major percentage of North Indian voters so there is a chance that they will show their favor towards this party.

There was a time Congress ruled the roost in Hyderabad even when on the opposition table but today the game is different. There is literally nobody who can take this party forward and all those who are remaining are already making plans to jump into TRS or BJP.

Of course, the High Command is proceeding forward with stubborn courage and they are doing what is necessary to give a tough fight in the elections. They are announcing their candidates rapidly but it remains to be seen whether the anti-incumbency will work in their favor or in BJP’s favor.

The story of the Majlis always remains the same whenever this election comes. They have their own seats and their own leaders and everything is pretty much fixed. As for the others, there was a time when trade unions were strong in Hyderabad so it helped the communists and others but over the years even that has gone weak. As a result, Communists hardly have a say. Also, they don’t really have a strong leader who can influence the people or drive the movement strongly.

During the bifurcation, there were many fears that Andhra people would be asked to get out and what not. However, nothing of that sort happened and after looking at the results of assembly elections in Serilingampally and Kukatpally constituencies it became clear that the Andhra voters were in favor of the locally strong party than their age old favorite TDP.

As such, TDP is wiped out even in Andhra Pradesh so that concern might trigger that particular community to vote for someone who can become their voice and face here. In a way, TRS was primarily responsible for Chandrababu quitting Hyderabad and the party also losing its life. So, will that be a factor that can drive the Andhra voters to favor the BJP or someone else? That remains to be seen.

Looking at the entire scenario it is more or less clear that TRS doesn’t seem to have a great competition and their victory is more or less confirmed. Already, they have confirmed 40 plus seats in their favor and the magic figure is 76 so that should not be an issue.

Since they have already shown their mettle in terms of development and works in the city, that should also work in their favor. The only thing that can take the power away from them is a miracle. However, if BJP is able to win a significant number of seats and the victories of TRS get marginal, it is certainly an alarm bell for the ruling party to be watchful as it would set precedence for the upcoming assembly elections. #KhabarLive #hydnews