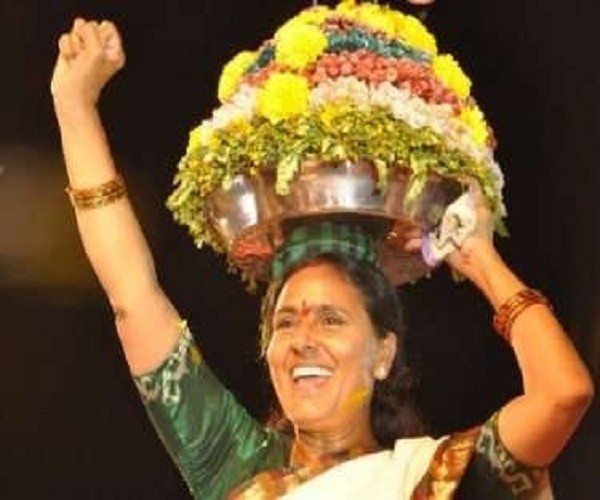 Telangana is in the news again, ever since K Chandrasekhar Rao, the state’s first chief minister and the president of the Telangana Rashtra Samithi (TRS), dissolved the Assembly on 6 September this year in a surprise move. Polls to the state will now be held on 7 December and the results announced on 11 December.

Weighing in on events and the state of the state is Bandru Vimala, popularly known as Vimalakka among the downtrodden in Telangana, and an activist who played a prominent role as part of the Joint Action Committee for the creation of the state from undivided Andhra Pradesh. In 2014, Telangana became India’s 29th state comprising Telugu-speaking regions.

The 54-year-old Vimalakka is also a balladeer, heading the folk troupe Arunodaya Samskritika Samakhya, and leader of the state women’s organisation, a voluntary welfare group. She tours Telangana organising cultural events and raising her voice for public issues.

The daughter of revolutionary Bandru Narsimayya, who participated in the Telangana rebellion, Vimalakka considers her father a role model and inspiration for her ideas. With him, she used to attend meetings of activists and writers fighting for the state and started singing revolutionary songs when she was only eight years old.

Today, Vimalakka faces police cases as part of her longstanding campaign for the separate state, which she has been involved with since 1995, and has even spent time in jail.

She believes that the KCR government has over the past four years since Telangana was created ignored the welfare of people, and instead worked to benefit capitalists, landlords and industrialists.

Excerpts from the interview with #KhabarLive:

Tell us about your father and his influence on your ideas.

My father Bandru Narsimayya is a revolutionary and he took an active role in the rebellion against landlords and the anti-people activities of the government. I witnessed not just revolutionary writers and activists visiting our home but the police too. While the writers and activists visited to chalk out plans for meetings, the police visited our home to harass our father. His commitment and dedication to the downtrodden and oppressed segments of society left a mark on me. I have been taking his advice till date.

Many Telangana traditions and cultural symbols, which were looked down upon by the erstwhile Andhra Pradesh government and society, have not been given special attention by the new state government too. How do you think this is working in bringing out the state’s rich heritage?

The TRS government has done nothing to bring out of the state’s rich heritage. Festivals like Bathukamma and Bonalu are part of Telangana tradition and culture and have been celebrated in the region for long. There were no TV channels in the earlier times. Now, the only reason there is some focus on these festivals is because of the media glare.

I am not against women celebrating Bathukamma festival in Hyderabad, but it is a festival to be celebrated at the village level. Some people are claiming proprietorship of these festivals. Telangana happened because of the people’s agitation. The state became a reality due to all people. No one person or group has the right to claim credit for it. It is the collective participation of people which made the state.

What are you singing about these days?

I visited many places in Telangana to promote Bahujana Bathukamma. It is aimed at ensuring the participation of all parties in celebrating the Bathukamma festival. The festival is confined to selective sections of society, now that the dream of Telangana state has been realised. Workers and agricultural labourers are not able to take part in the celebrations.

Do you have any plans to campaign for political parties? Who wants your support? The state Congress unit has called upon you to join their campaign. Will you do so?

I am not contesting the Telangana Assembly elections, nor am I supporting any political party. I just want to make it clear that we want to safeguard the environment and cannot allow open-cast mining. I want to raise awareness among people so that they ask their candidates to produce a blueprint or plan to prevent people from migrating to cities for livelihood.

Many of the prominent faces of the Telangana movement such as Prof B Kodandaram and balladeer Gaddar seem disillusioned with the TRS. Why is this?

TRS leaders do not want to encourage or support them. The TRS does not want any dissent or agitation. They want to project that everything is alright under their regime. The government machinery is being misused to suppress Dalit movements in the state. False cases are being filed against activists; people are still being killed in encounters. For example, five suspected terrorists were killed on April 8, 2015, near Alair in Nalgonda district of Telangana.

You supported K Chandrashekar Rao during the Telangana movement. Why are you against him now?

Rao, after becoming the chief minister of the state, has just forgotten about those who supported him during the Telangana movement. While he wanted our support earlier, is it not required while ruling the state? He has continued to support and encourage capitalists from Andhra Pradesh.

I am not against the people of Andhra Pradesh but against capitalists who thrive by exploiting the people of Telangana. Rao has failed to distribute the excess land to the landless poor. Not a single acre of land has been recovered from the landlords till date. He used the suicides of youth in Telangana during the agitation. Around 1,400 people sacrificed their lives for the state but the new government has only identified a few hundreds of people as martyrs for Telangana.

Kaluvurthi Kavitha, KCR’s daughter, promoted Bathukamma festival in Telangana. It is true that I shared the stage with Kavitha during a women convention in Warangal. She has forgotten me after being elected to the Lok Sabha. I called her over the phone to congratulate her, but in vain. Later, her assistant sent me a message. She has not spoken to me in the last four-and-a-half years.

What, in your view, are the KCR government’s failings?

The TRS government has belied the hopes of the people of Telangana. It promised the moon but delivered nothing. The government has not helped students from economically poor families to pursue higher studies. It has not been spent funds on construction of school buildings or repairing the existing ones in rural areas. I want the government to enable girls to pursue higher studies, instead of offering them some welfare schemes. The TRS has also failed to re-open sugar factories in Telangana.

Hundreds of workers and sugarcane farmers will benefit if these factories are made functional again. K Chandrashekar Rao has also not done anything to mitigate the problems of labourers in cities and agricultural labourers in rural areas. He has failed to meet the expectations of the people. #KhabarLive