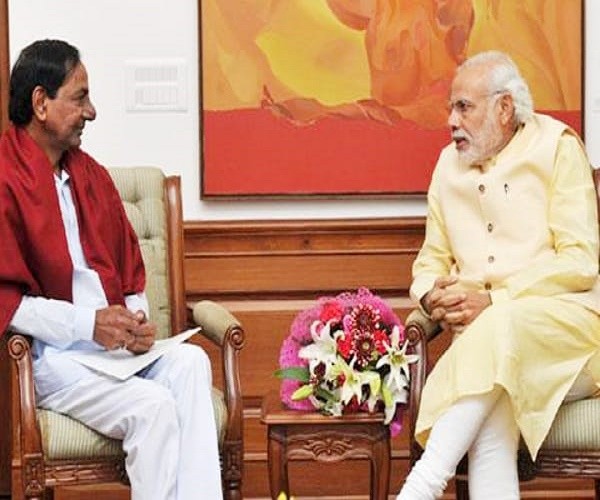 On 6th September, KCR dissolved Telangana cabinet and announced they will be going for early elections. He even announced, when the elections will happen and when the next government will form.

Astrology or numerology or any other –logy?

Many people wondered why KCR is going for early elections while he had nine more months to be in the government. Some proposed that it might be because of KCR belief in astrology and as per the astrologer he will have good time until January 2019 and after that his time is not that good. Some others predicted that it is not just astrology but also numerology.

As he consider 6 as his lucky number, he announced dissolving of government on 6th and he announced 105 MLA candidates (total of this also is 6) . They even argued that, the time KCR met governor, the time governor accepted his request all have one thing in common – that is total will be 6.

However, political observers feel that whether he is following astrology or numerology or any other “–logy” is not sure but he is definitely following some political strategy. They are of opinion that KCR has an implicit understanding with Modi and this early election strategy helps both of them like a Quid Pro quo arrangement.

How this helps KCR?

KCR sometime back lambasted Modi and announced a federal front that never took off. Political leaders of other parties like TDP and DMK called his Federal front is plan B of Modi. Moreover both of them have common political rival i.e. Congress Party. So, many in political circles believe that KCR does have an understanding with Modi. This early elections help KCR in two ways.

However compared to North India this anti-incumbency is much more in South India on BJP. So if KCR faces elections in 2019 along with general elections of India, if people are against BJP at Centre, they may vote for Congress in the Centre and this may impact voting pattern for assembly as well.

Even though cross voting happens, having elections simultaneously for center and state may adversely impact TRS prospects, as people who voted Congress at center may also prefer voting for the same in the state. By having early elections, KCR will be able to completely avoid that pattern happening in Telangana.

ALSO READ:  ‍BJP in a flux over Covid Conundrum, Blame On Telugu States

Second thing is, once Telangana state assembly elections are over, he will have ample time to focus on politics at center. In 2014, despite winning considerable seats for Parliament TRS didn’t get a chance to play active role in Central politics as it is neither part of NDA nor UPA. But if TRS joins NDA officially in 2019 elections, that will hamper the prospects of TRS in the state as Telangana has considerable Muslim population.

What Modi will get?

There are four other state elections happening soon. If KCR goes for elections before that four-state elections and defeats Congress in Telangana that will be a big blow to morale of Congress and that may impact elections in those 4 States. And obviously that will help Modi.

Also, by helping KCR in de-coupling assembly and Parliament elections, Modi has a chance of having new partner joining NDA after this state elections and before 2019 elections. Even in 2009 also, KCR expressed his willingness to join NDA if it wins. Actually TRS contested elections as an ally of third front, but after elections are over and before results are announced KCR made this controversial statement.

However, as NDA did not win, his plan of joining NDA was put in cold storage at that time. Even now also KCR cannot join UPA as Congress is its rival in the state. So, there is very high probability that KCR may join NDA in future. Only hindrance for this for KCR is, losing Muslim votes in the state. So, Modi by helping KCR now, will get benefit later, as another partner joining into NDA

We wil have to wait and see how people of Telangana react on this.#KhabarLive