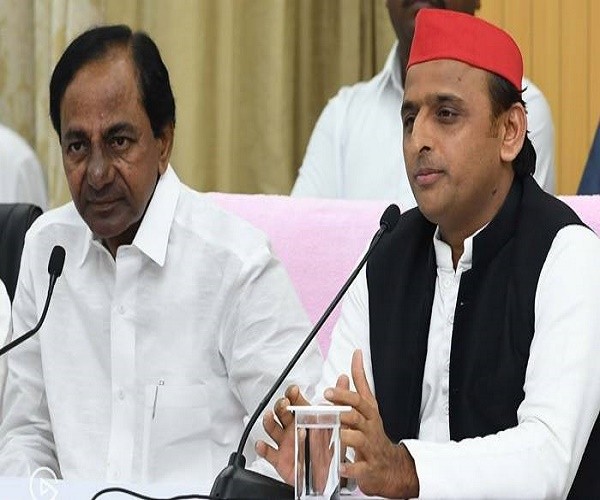 Telangana Politics is taking interesting twists and turns with each passing day before the dates for the State Assembly Elections are announced by the Chief Election Commissioner of India!

In an interesting development, Chief Minister K Chandrasekhar Rao has sent an SOS to former Chief Minister of Uttar Pradesh, Akhilesh Yadav to help in attracting the large “Yadav Votes” in the State towards TRS. It is being said that KCR has requested the Samajwadi Party scion to plan a trip to Hyderabad once the dates for the next Assembly Elections are announced; and even proposed holding a mega “Yadava Atmagaurava Sabha” at the Lal Bahadur Stadium, in the heart of the City.

It is being said that Samajwadi Party representative in Telangana, Jagadeesh Yadav would soon be travelling to Lucknow with the request from the ‘Pink Boss’. It is being said that the idea of this public meeting was first mooted by Talasani Srinivas Yadav, who has the mandate of coming up with effective strategies to win maximum Assembly segments within the twin cities of Hyderabad and Secunderabad.

Yadav community is believed to be a formidable force in at least 10 Assembly segments within the Capital region, and this proposed public meeting will have a ripple effect on many constituencies across the State of Telangana. A TRS Party insider informed #KhabarLive that Yadavs’ from across Telangana will be chauffeured into Hyderabad for the public meeting, when it happens. #KhabarLive

ALSO READ:  Taste The Best Mouth-Watering 'Street Food' In Hyderabad With Flavours And Aroma Of Deccan!