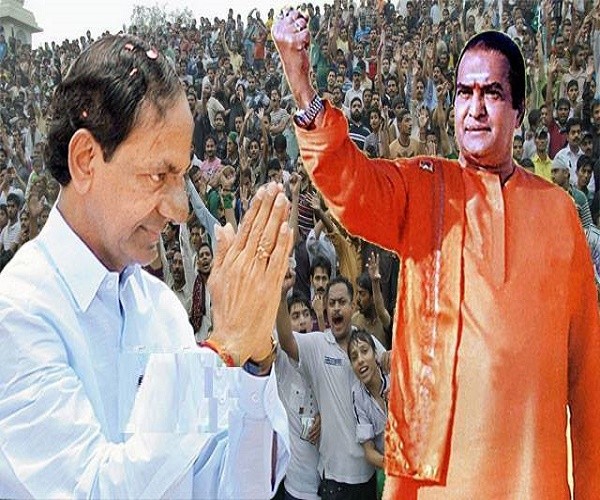 It is well known that KCR is a huge fan of larger-than-life NTR. He has so much fascination for matinee idol that he named his son KTR as `Kalvakuntla Taraka Rama Rao`. Now KCR seems to take some lessons out of NTR’s book of success to get victory in Telangana elections for the second successive time.

In 2014, TRS claimed credit for Telangana statehood struggle to come to power. In the coming 2019 elections, it is bent upon raising the ‘self-respect mantra’ to appeal to the voters and retain power. It may be recalled NTR put this formula to maximum use and ensured that the mighty Congress bite the dust in 1983 in united AP.

With the elections fast approaching, KTR is bringing ‘self-respect mantra’ to the fore repeatedly saying that a vote for Congress is a vote for Delhi, a vote for TDP is a vote for Amaravati and a vote for Kodandaram is a vote for nobody as it goes useless. The TRS game plan is that awareness on self-rule and self-respect will go to help its victory in the face of Congress – TDP combine’s high commands operating out of Telangana soil.

The TDP used this mantra against Congress in United AP and now the same plan is working against TDP after formation of separate Telangana. More than that, KTR effectively describes his father KCR as a champion of Telangana pride by saying that KCR had put his head in the jaws of death in the state agitation and made sure that Telangana is a reality now.

ALSO READ:  What Happens When Private Hospitals Pay Off Patients Out Of The Court?

Meanwhile, Telangana Congress Working President A. Revanth Reddy intensified his political attacks on TRS leadership, saying that there would be no self-respect if KCR did not bother to create promised jobs to youth while he had already given four top jobs (KCR, KTR, Harish Rao, Kavitha) within his family after Telangana formation. Congress is now promising to create 2 lakh jobs in the first 100 days of its government formation in 2019 elections. #KhabarLive