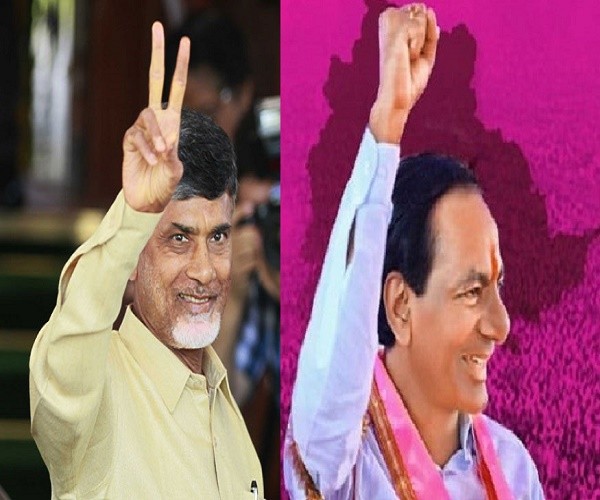 Andhra Pradesh chief minister and TDP supremo N Chandrababu Naidu seems to have made the battle for Telangana tough for the ruling TRS. As TRS supremo is bit confused over Prajakutami political strategies and Naidu’s perfect paws moving in this elections in Telangana.

On the day of dissolving the state assembly, TRS chief and CM K Chandrashekar Rao was confident of a landslide victory with 100-plus seats. He had even termed the elections a mere formality. TRS leaders and cadre were jubilant. But, as voting day approaches, things are changing on the ground, indicating that it is not going to be a cakewalk for the Telangana Rashtra Samiti (TRS).

Chandrababu Naidu has played a key role in the formation of ‘Prajakutami’ or grand alliance to take on the TRS. After Naidu met Congress chief Rahul Gandhi, political equations have been changing in favor of the Congress-led and TDP-backed alliance. Naidu did not bargain for more seats for the TDP with the sole intention of teaching a lesson to his old nemesis KCR. Naidu instead is concentrating on winning maximum seats. The TDP, which won 15 seats in 2014 elections, agreed to contest on just 14 and is in contention in 13 of them.

The TDP has sacrificed seats like Patancheru and Huzurabad where it could have put up a good fight. “Our alliance should win. Don’t force adjustments and spoil the spirit of ‘Prajakutami’. We should concentrate on the areas where we are strong,” Naidu has told TDP leaders in Telangana.

In Kukatpally near Hyderabad, Naidu has played sympathy card. He has given the TDP ticket to Nandamuri Suhasini, the granddaughter of NTR and daughter of his brother-in-law Nandamuri Hari Krishna who died in a road accident recently.

In Kukatpally, majority voters are migrants from Andhra Pradesh and are sympathetic towards NTR and Hari Krishna. Naidu believes this factor plays a key role in ensuring a win for his party.

“The Congress and TDP alliance has some negative impact in the northern part of Telangana. But it will work when it comes to entire Telangana. It will have a positive impact in areas like outskirts of Hyderabad and districts like Khammam and Mahabubnagar,” a political analyst told @KhabarLive.

Apart from trumpeting his government’s achievements, KCR is doing the only thing he can to win this election: discrediting the alliance. He is doing that by targeting the TDP, pointing out that Naidu’s party had not only opposed Telangana’s formation but was also trying to rob the new state of the benefits of separate statehood. Though the Congress is the main rival of the TRS, he is not focusing his campaign on that party. He had called Rahul Gandhi a “buffoon” but stopped at that and is now training his guns only on Naidu, casting the net of Telangana pride to catch votes.

But, in the process, Rao is badmouthing Naidu to an extent that has surprised both his supporters and detractors. He has called Naidu a variety of names such as “drohi” (betrayer) and “durmaargudu’ (sinner). There is a risk in this for TRS, of course. At least 60 lakh of Telangana’s 3.5-crore population are of Andhra origin and are unlikely to take kindly to the epithets that Rao is hurling at Naidu.

On the other hand, when Telangana chief minister K Chandrasekhar Rao recommended dissolution of the state Assembly on 6 September, he was gung-ho with supreme confidence that he would win the election that would follow. This cocksureness was, of course, what had prompted the Telangana Rashtra Samithi (TRS) leader to go in for an early election, which would otherwise have been held along with the Lok Sabha polls a few months later.

But two months after KCR took that gamble and about a month before polling, much of his cheeky confidence seems to have evaporated. Even his supporters are beginning to wonder if he is still the unrivalled hero of Telangana, the state carved out of Andhra Pradesh in 2014 after an agitation he spearheaded. His public bluster of winning 100 or more of the Assembly’s 119 seats in the election next month continues, but his impressive oratory in Telugu and Urdu fails to hide his nervous gloom.

That’s because he hadn’t expected two things to happen when he opted for the Assembly’s dissolution. One, he didn’t expect the election date to be as late as 7 December. Two, he also didn’t expect what looks like a formidable Mahakutami – a grand alliance – consisting of Congress, Telugu Desam Party (TDP), Telangana Jana Sena and CPI to shape up so quickly against him.

The gap of 90 days between his announcement and the polling is depriving Rao of the advantages he imagined he would reap by springing a nasty surprise on his rivals. When he had made the announcement, it stunned the Opposition, though his gamble had been in the air for some time. Adding to that shocker was his immediate announcement of the names of candidates for 105 constituencies.

But surprises have a habit of ceasing to be surprises after a point, especially in politics. As former British prime minister Harold Wilson once remarked, a week is a long time in politics. Three months is eternity. The TRS leader may have liked the polling to be held earlier, perhaps in early November.

The delay also left scope for dissidence to crop up in the TRS in many constituencies. It also not only gave the Opposition enough time to sew up the Mahakutami, but even gave his rivals the luxury of making a leisurely assessment of TRS candidates before deciding on suitable candidates of their own.

Despite his public braggadocio, Mahakutami is giving KCR sleepless nights. His sense of gloom for the future can be best understood from election statistics of the past.

Arithmetic against KCR
Contrary to popular perception, the TRS didn’t win a massive mandate in 2014, even when the public support for him was supposedly at a peak as part of the euphoria over Telangana’s formation. With a vote share of 34 percent, the party barely scraped through to cross the halfway mark with 63 seats. While the Congress scored 25 percent votes and 21 seats, TDP came third with 14.5 percent votes and 15 seats.

Though TRS poached 13 MLAs of the TDP and seven of the Congress later, what is driving KCR up the wall now is that the two parties, which together polled 39.5 percent votes — or 5.5 percent more than the TRS in the last election—are now part of an alliance. The CPI, with 0.9 per cent vote and one seat last time, and Telangana Jana Samithi (TJS), a popular splinter group of those who agitated for a separate state, are also part of this alliance, giving it a little more electoral muscle.

Election outcomes can’t be predicted with simple additions and subtractions, but KCR is more than wary of the talents of TDP leader and Andhra Pradesh chief minister Chandrababu Naidu for turning an arithmetic advantage into an electoral windfall for the alliance.

Will KCR’s populism win?
The only things that TRS is heavily banking upon are the impressive array of populist schemes that the chief minister rained on the people of the new state, targeting almost every demographic group, in the last four years. As the TRS boast goes, every eligible family benefits from “at least three” schemes. These include the offer of two-bedroom houses to the poor, Raithu Bandhu scheme, which promises Rs 8,000 per acre to each farmer to grow two crops a year, payment of Rs one lakh to the poor for the marriage of a daughter and providing sheep and land to weaker sections.

KCR may have learned the fine art of populism from late Tamil Nadu chief minister Jayalalithaa. But he also may have learned from her experience that such schemes and freebies don’t always guarantee election landslides. Besides, many schemes are still underway. A half-executed promise is like a glass that is half full that, to some, may look half-empty. The creation of a separate state and KCR’s promise of the moon together have raised hopes so high that the TRS government has fallen short of people’s expectations.

What makes it worse is that, unlike the TDP, the TRS lacks a robust cadre to beat the government’s drum about welfare schemes at the grassroots level. His government has indeed done some exemplary work, but there is no organisational structure to take this message to the people.

KCR dreams of trouncing the Mahakutami like the late chief minister YS Rajasekhara Reddy defeated the alliance of TDP, TRS and the Left in 2009 in united Andhra Pradesh. But it looks easier said than done now.

If the Mahakutami snatches an upset victory, KCR can blame his name-calling, among other things. #KhabarLive