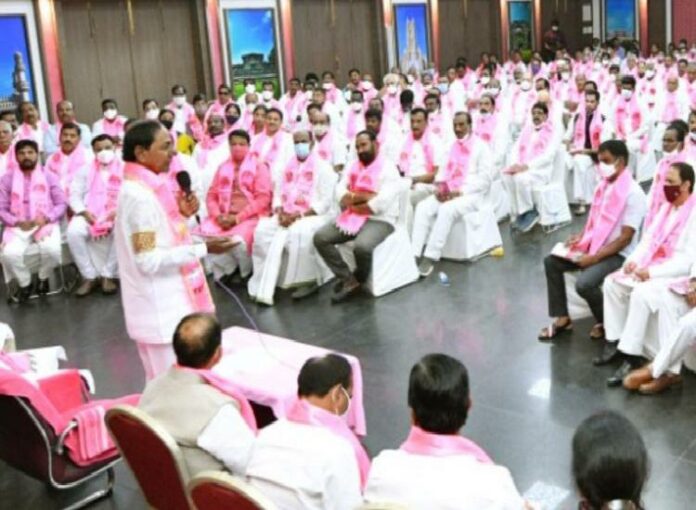 In the TRS executive committee meeting convened, CM KCR informed all the party legislatures and the leaders that the name of the party’s nominee for the GHMC Mayor and Deputy Mayor elections would be announced in a sealed cover. The election is scheduled to take place on February 11.

TRS supremo has asked all the TRS corporators and ex officio members with voting rights to be present at the TRS Bhavan at 9 am on February 11. There they will all be handed over a sealed envelope with the name of the mayor and deputy mayor candidate. They will all then be then taken to the GHMC headquarters.

All the corporators who were elected in the recently concluded Greater Hyderabad Municipal Elections (GHMC) will then take oath. Once they take oath, they will have to file their nomination. That is when the TRS members will have to open the sealed envelope. At 12:30 the meeting starts and in this meeting by a show of hands the number of corporators supporting each nominated candidate is accounted for.

While the TRS has decided its strategy for the upcoming GHMC mayoral election, the BJP has slammed the CM and alleged that he chose this method as he lacks trust on his own party leaders.

BJP has also said that they consider the ‘sealed cover GHMC mayor’ as an insult to democracy and the voters of GHMC.

BJP Chief Spokesperson K Krishna Saagar Rao said, “It’s out in the open that CM KCR has no trust left on his party leaders, inclusive of GHMC corporators. This is publicly being expressed through the election process of GHMC Mayor through ‘a sealed envelope’. TRS is no different from Congress party, when it comes to making the election process a complete farce”.

The sealed envelope is not a new concept and is something that is common in political parties according to MIM MLC Syed Aminul Hasan Jafri. The sealed envelope concept has a surprise element to it.  Speaking to TNM, he said, “The Congress has done it in the past, the TDP has done it and the TRS has also done it. It’s something that happens in all political parties. This is not an issue of trust. In this election, as it is an election by show of hands, the recognized parties can issue a whip. This is like a whip. Anyone who dissents can be disqualified.”

According to the rules, if 1/3 of the members defy the party whip and vote for somebody else then they won’t incur disqualification. Even if cross voting takes place, their vote is bound to be counted and the result is valid. The result cannot be withheld as it is legal.

Jandhyala Ravi Shanker, a noted constitutional advocate, felt that a sealed envelope is used when there is a lack of absolute confidence on the part of the ruling party. “Are you (KCR) worried about somebody voting against him or has he (KCR) purchased somebody to vote in his favour? It is absolutely wrong to say that a sealed cover is equivalent to a whip.”

The sealed envelope concept, though not new, has been often referred to as a process that changes an election process into a mere selection process. “Voting is a statutory right which has the flavour of constitution”, asserts Ravi Shanker. While the TRS has adequate numbers with the inclusion of the votes of the ex officio members– to win both the mayor and the deputy mayor posts, why CM KCR chose the sealed envelope strategy will remain a mystery. #KhabarLive #hydnews