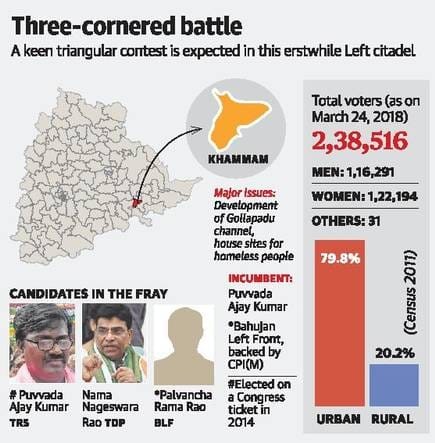 A high-octane battle is on the cards in the Khammam constituency with the TDP, in alliance with the Congress, the CPI and Telagnana Jana Samiti, banking on the combined strength to win the high-profile seat in the December 7 elections.

The segment, encompassing the fort town of Khammam, has remained a citadel of the CPI(M) and the CPI for several decades since its inception in 1952. The Congress too reigned supreme in the constituency, winning the seat four times including in the 2014 election.

The TDP has fielded its Polit Bureau member and former Khammam MP Nama Nageswara Rao in an apparent bid to revive its fortunes in the district, considered the political nerve centre of south Telangana.

ALSO READ:  Why KCR Changing The 'Electioneering Strategy' In Telangana?

The ruling TRS is pinning its hopes on the “development plank” to retain its sway in the constituency where it has fielded former MLA Puvvada Ajay Kumar.

Ajay Kumar won from the constituency on Congress ticket in 2014, trouncing Tummala Nageswara Rao, who contested on TDP ticket, by a margin of 5,682 votes.

Both Kumar and Rao later joined the TRS separately and the latter was inducted into the State cabinet as Minister for Roads and Buildings before being elected as the TRS candidate from the Palair constituency in a byelection in 2016.

By fielding a backward classes leader, Palvancha Rama Rao, from the constituency, the CPI(M)-backed Bahujan Left Front (BLF) is hoping to spring a surprise by relying on the support of weaker sections, which constitute the lion’s share of the electorate.

The BJP is also trying to make inroads into the constituency.

The candidates of the main political parties have focussed their attention on winning the support of Muslim minorities, traders and employees who form a sizeable chunk of the total electorate.

The TDP campaign managers have drawn up plans to organise roadshows by party president N. Chandrababu Naidu and the actor-turned politician N. Balakrishna in the final leg of the campaign, TDP sources said.

The electioneering of the CPI (M)-BLF is set to move into top gear with the CPI (M) polit bureau member Brinda Karat and a host of senior leaders of the BLF are slated to spearhead a whirlwind campaign in the district #KhabarLive .