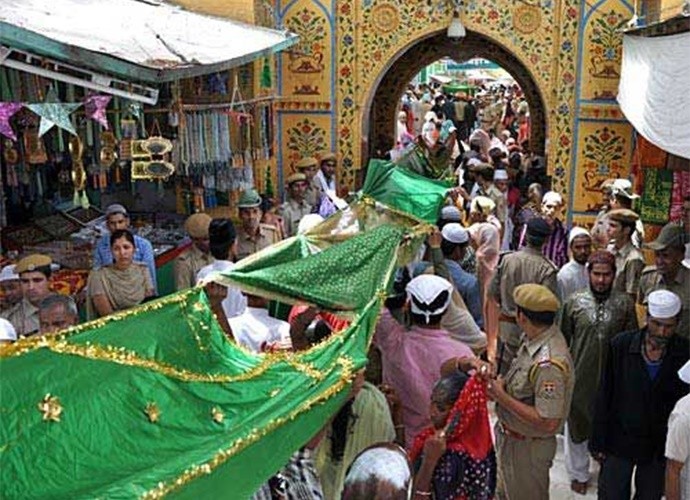 When death is a time to rejoice, and not to grieve. A baby was born in Sijistan (modern-day Sistan) in Iran around 536 AH or 1141/42 AD. His parents named him Moinuddin Hasan, and are said to have affectionately called him Hasan. Today, he is known by many names, the most famous of them being Khwaja Garib Nawaz and Khwaja Moinuddin Chisti. His life is described in the famous book Siyar ul Arifin (Biographies of Mystics) written in the 16th century by the famous Sufi saint, Jamali, who collected stories from Iran and India.

The little child was special and showed his famous earth-like generosity right from his infancy itself. It is said that whenever any woman with a child came to his house and that child cried for milk, he would signal to his mother to give his share to that baby.

The turning point in his life came when he was in his teens. His father Saiyed Ghiyasuddin Hasan had died, and Moinuddin Hasan lived on his earnings from a garden and water mill, left to him by his father. A mazjub or a saint, Ibrahim Qandoozi, intoxicated by the thought or nearness of God came into that garden as Hasan was watering it. The young Moinuddin Hasan welcomed him and offered him some grapes.

The saint was greatly pleased and taking out a piece of cake from his bag, chewed on a piece of it and then put it in the mouth of the young boy. As soon as he ate it, he experienced a change within him – a strange repulsion for worldly goods. He sold his garden and water mill and distributed the proceeds among the local mendicants.

He started living in Samarqand and Bukhara and studied the Quran and religious texts. After some years he went to Harwan in Nishapur (Iran) where he practised austerities under Sheikh Usman Harawani. He served his sheikh for many years. The search for knowledge led Moinuddin Hasan to many cities and he spent some time with the famed Baghdad Sufi saint Ghaus ul Azam of Abdul Qadir Jilani. Khwaja Moinuddin Hasan became very famous as a mystic and thousands would flock to him for guidance.

He was 52 years old when Sheikh Usman Harawani, who was pleased with him, gave him a khirqah or patched cloak of successor ship and appointed him his khalifa or spiritual successor. Once again he left on his travels and went to Ush, Isfahan, and then Mecca for Hajj and Medina.

In the Prophet’s mosque in Medina, while he was praying he is said to have heard the Prophet’s voice telling him to to go to Hindustan and to the city of Ajmer.

At that time he had no idea where Ajmer was. However, he proceeded via Baghdad and Herat to Lahore and thence to Delhi and Ajmer. Muizuddin Muhammad bin Sam of Ghor had already defeated Prithviraj Chauhan and established his rule in Delhi.

Khwaja Moinuddin Chisti started living and preaching in Ajmer. His illuminating and instructive discourses, full of spiritual insights, soon drew the local populace to him and he began to attract devotees from far and wide.

When once asked about the highest devotion of God, Gharib Nawaz remarked that it was nothing but: “Dar mandgaan ra fariyad raseedan wa haajat-e-baichaargaan ra rawa kardan wa gursingaan ra sair gardaneedan (To redress the misery of those in distress, to fulfil the needs of the helpless and to feed the hungry).”

ALSO READ:  Tip Of The Iceberg: The 'Big Level' Of Zakat 'Malfunctioning' In Hyderabad!

He earned the soubriquet of Garib Nawaz or patron of the poor; even today thousands are fed in his dargah daily. The two huge deghs or pots donated by Mughal emperors, Akbar and Jahangir, in which rice is cooked and distributed daily are world famous. The pot presented by Akbar holds 4800kg of food and the one by Jahangir holds 2,400kg of food. Many grateful devotees whose prayers have been fulfilled contribute to it daily.

This year his urs falls on March 24, and is celebrated by millions from across the world. I get many questions on why a death anniversary is celebrated or what is an “Urs”. So here is a little explanation on that.

Urs comes from Arabic and literally means “wedding”. The death anniversary of a Sufi saint in South Asia, is usually celebrated as a wedding anniversary at the saint’s dargah (shrine or tomb).

Why a wedding anniversary?

To understand that we must understand that a Sufi saint’s beloved is Allah and he/she spends their entire lifetime perfecting and preparing themselves for that union, which will be attained after death when the soul achieves union with the beloved divine.

This is ishq-e-haqeeqi which literally means “the real love” metaphorically signifies “the love of God”. It refers to the belief that only God is worth loving and he is the only one who can return his creature’s love for him. “Khusrau darya prem ka, ulti wa ki dhaar, Jo utra so doob gaya, jo dooba so paar (Oh Khusrau, the river of love, Runs in strange directions. One who jumps into it drowns, And one who drowns, gets across).”

This concept of death as an “Urs” or a wedding anniversary been taken from the Hadith: “Sleep just like the bride.” (Mishkhat) the angels say to the pious in the grave, “Sleep with restfulness and comfort just like a bride.”

ALSO READ:  Security Flaws In 'India Post' Is Vulnerable To Hacking Your Data

Therefore, a Sufi saint’s death is a time to rejoice, not to grieve, as it is regarded as wisaal (union with the beloved), and the death anniversary is celebrated as a wedding.

As Khwaja Moinuddin Chisti himself said: “The noise of the lover lasts only so long as he has not seen his beloved. Once he sees the beloved, he becomes calm and quiet, just as the rivers are boisterous before they join the ocean but when they do they are calm forever.”

Nowhere does this come out more beautifully than in the qawwalis of Hazrat Amir Khusrau, who wrote them for his spiritual Master Hazrat Nizamuddin Auliya: “Khusrau raen suhaag ki, jaagi pi ke sang, Tan mero man pi-u ko, dovu bhaye ek rang (Khusrau – the bride – spends the eve of her wedding awake with her beloved, in such a way that the body belongs to her, but heart to the beloved, the two become one).”