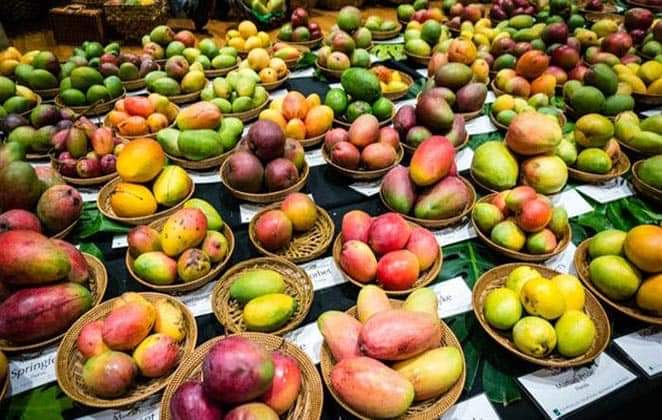 Mangoes are not only national fruit in Indian Subcontinent but also culture. Nothing beats the summer season when it comes to delicious mouth-watering mangoes. It has always been a pleasant and basic part of Indian subcontinent lives. This region is exclusively famous for its exotic mango hotspots, promising delightful flavours and aroma.

From royalty to the ‘aam’ (common) man, mangoes have delighted one and all.

Mango (Mangifera indica L.) belonging to Family Anacardiaceae is the most important commercially grown fruit crop of Indian Subcontinent. It may be called the king of fruits.

The 15th and 16th centuries marked a sort of culinary turning point for the world. The discovery of the ‘New’ world i.e. North and South America, opened up a whole new universe of vegetables and fruits , that was quick to come, on the plate, and as this new food got shipped to the ‘old’ world – Europe, Africa, Asia and Australia, it transformed cuisines. Known as the ‘Columbian Exchange’ this period saw the introduction of the potato, tomato and maize in Indian Subcontinent.

But this was not a one way street. It was during this time, that the popular Indian fruit mango, loved and prized by people across the Indian subcontinent, was introduced to Europe and America. In fact, the very name for the fruit – ‘Mango’ comes from the Malayalam word for it – Maanga, which Portuguese traders picked up as they transported the lush fruit , back home from the ports of Kerala.

It is a point to note that the fact that India is the original home of a mango is reflected in its botanical name – Mangifera indica, itself. The earliest evidence of the mango in India comes from sixty million year old fossils found in Damalgiri in Meghalaya. The mango was a wild fruit which grew in the thick forests of India at that point.

In her research paper the ‘History of mango’ Dr Indu Mehta, Professor of History from the University of Kumaon, points out that the mango took its current form around 2000 BCE, when through the grafting process, the wild variety was developed so that it could be grown in orchards.

Botanically the species Magnifera Indica originated in the Eastern Himalayas in the India-Burma (Myanmar) border, several thousand years ago. In Sanskrit, one the earliest known languages spoken in that part of India, it is called aamra. The fruit itself is called aamra-phalam. In the neighboring plains of North India where Hindi is the spoken language it is called aam-phal.

The tree then migrated to the south of the Vindhyas where Tamil was the spoken language. The equivalent in Tamil of the Hindi word phal is kaay. So aam-phal became aam-kaay. In course of time aam-kaay became maamkaay due to transposition of pronounciation. The aamkaay then gradually became maamkaay or maangai. In Malayalam language, which is a descendant of Tamil, maangai became maanga.

India’s tryst with mangoes can be traced back centuries. From Huien Tsang to George Bush; and Khusrau to Ghalib, the love for mangoes has spared no one. is often said that the hills of north-eastern India adjoining Myanmar are the likely centre of the Mango’s origin. This rich, delicious pulpy fruit caught the fancy of Alexander the Great, who is believed to have carried the fruits all the way back to Greece from the court of Porus!!

While Babur found the Mango to be overrated, the fruit found its way into the hearts of other Mughal royals. Akbar planted 1,00,000 mango trees near Darbhanga, Bihar. But it’s Jahangir who said , ” NOT WITHSTANDING THE SWEETNESS OF THE KABUL FRUITS, NOT ONE OF THEM HAS, TO MY TASTE, THE FLAVOUR OF THE MANGO.” Dr. Indu Mehta said d in his research, “Mughal patronage to horticulture led to thousands of Mangoes varieties that were grafted, including the famous Totapuri, which was the first variety to be exported to Persia and other Kingdoms.” But it wasn’t just the Mughals!

Under the Nizams of Hyderabad Deccan, each mango variety cultivated had its own elaborate naming ceremony. Azam e Samar, Samar e Behishth, Batasha, Himayat Pasandh also known as (Himayat, Himayuddin Pasandh, Nizam Shahi, Humayun Pasandh) and Gulkhand etc. all these names were royals’ fevourite. The Rataul, grafted by Kareemuddin in 1874 and the most expensive of all, Kesar, which was first cultivated by Nawab of Junagarh in 1931.

It is wonder that the best varieties of mangoes from Indian Subcontinent bear royal names such as Jahangir and Himayuddin, Himayat (named after Mir Himayat Ali Khan Muazzam Jah Bahadur, youngest son of Nizam of Hyderabad, Deccan, Nizam VII Mir Osman Ali Khan Bahadur). Even Bahadur Shah Zafar had a mango garden known as “Hayat Baksh” in the gardens of the Red Fort, Delhi, in which some of the most delicious and juicy varieties were grown. (MIRZA Ghalib’s letters.

MIRZA GHALIB, THE GREAT URDU/PERSIAN POET AND HIS LOVE FOR MANGO:

Ghalib’s love for poetry and wine became secondary to his love for mangoes. In letters to friends he mentions having tasted about 63 varieties of mangoes!!

Translation:
(Ask me! for what do you know? a mango is far sweeter than sugarcane… perhaps from the great heights above the gardeners of heaven’s orchards have sent, by the order of God wine filled in sealed glasses…)

William Dalrymple mentions an incident in a book about a time when Ghalib was asked to spell out his eating preferences.
Ghalib’s response to mangoes was, ” AAM MEETHE HO… AUR BOHOT SE HO! (LET THERE BE SWEET MANGOES, AND IN PLENTY!)”

There are hundreds of varieties of mangoes in India with a distinctive taste, shape and size. Mango is even the national fruit of India and cultivated mostly for edible fruit in the country. India ranks first among world’s mango producing countries accounting for about 54% of the world’s mango production. Other major mango producing countries include China, Thailand, Mexico, Pakistan, Bangladesh, Philippines, Indonesia, Brazil, Argentina, Nigeria, Egypt, South Africa, Australia.

COMMERCIAL VARIETIES:
Alphonso : This is the leading commercial variety of Maharashtra state and one of the choicest varieties of the country. This variety is known by different names in different regions, viz. Badami, Gundu, Khader, Appas, Happus and Kagdi Happus.

Bangalora : It is a commercial variety of south India. The common synonyms of this variety are Totapuri, Kallamai, Thevadiyamuthi, Collector, Sundersha, Burmodilla, Killi Mukku etc.

Banganapalli : It is a commercial variety of Andhra Pradesh and Tamil Nadu. It is also known as Chapta, Safeda, Baneshan and Chapai.

Bombai : It is a commercial variety from Bihar state. It is also known as Malda in West Bengal and Bihar.

Bombay Green : It is commonly grown in north India due to its early fruiting quality. It is also called Malda in northern India.

Dashehari : This variety derives its name from the village Dashehari near Lucknow. It is a leading commercial variety of north India and one of the best varieties of Indian mangoes.

Fazli : This variety is commonly grown in the states of Uttar Pradesh, Bihar and West Bengal. Fruit is very large, obliquely oval in shape.

Sindhari: This variety is commonly grown in Sindh, Gujrat and Punjab. It’s delicious, juicy and sweet like honey.

Fernandin : This is one of the oldest varieties of Bombay. Some people think that this variety originated in Goa.

Himsagar : This variety is indigenous to Bengal. This is one of the choicest varieties of Bengal and has gained extensive popularity.

Kesar : This is a leading variety of Gujarat with a red blush on the shoulders. Fruit size is medium, shape oblong and keeping quality is good.

Kishen Bhog : This variety is indigenous to Murshidabad in West Bengal.

Langra : This variety is indigenous to Varanasi area of Uttar Pradesh. It is extensively grown in northern India.

Mankurad : This variety is of commercial importance in Goa and in the neighbouring Ratnagiri district of Maharashtra.

Mulgoa : This is a commercial variety of south India. It is quite popular among the lovers of mango owing to high quality of its fruit.

Neelum : This is a commercial variety indigenous to Tamil Nadu. It is an ideal variety for transporting to distant places owing to its high keeping quality.

Samarbehisht Chausa : This variety originated as a chance seedling in the orchard of a Talukdar of Sandila district Hardoi, U.P. It is commonly grown in northern part of India due to its characteristic flavour and taste.

Suvernarekha : This is a commercial variety of Visakhapatnam district of Andhra Pradesh. Other synonyms of this variety are Sundari, Lal Sundari and Chinna Suvernarekha.

Vanraj : It is a highly prized variety of Vadodra district of Gujarat and fetches good returns.

Zardalu : This variety is indigenous to Murshidabad in West Bengal. It derives its name from Zardalu, a dry fruit popular in North West Frontier Province and Sindh in Pakistan owing to similarity in shape.

HYBRID VARIETIES
Amrapali : This hybrid is from a cross of Dashehari and Neelum.

Mallika: It is from a cross of Neelum and Dashehari.

Arka Aruna : It is a hybrid between Banganapalli and Alphonso.

Arka Puneet : It is a hybrid between Alphonso and Banganapalli.

Arka Anmol : This hybrid is from a cross of Alphonso and Janardhan Pasand.

Arka Neelkiran : It is a hybrid between Alphonso and Neelum.

Ratna : This hybrid is from a cross of Neelum and Alphonso.

Sindhu : It is from a cross of Ratna and Alphonso.

Ambika: This hybrid is a cross between Amrapali and Janardhan Pasand.

Au Rumani: It is from a cross of Rumani and Mulgoa.

Manjeera : This hybrid is from a cross of Rumani and Neelum.

PKM 1: It is from a cross of Chinnasuvernarekha and Neelum.
#KhabarLive #hydnews