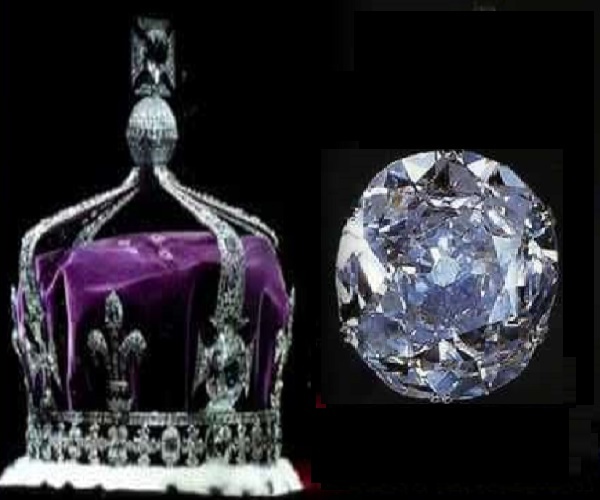 No other diamond in the world history had such a tumultuous and clamorous journey and a fascinating history as the Koh-i-Noor. #KhabarLive ravels the fantastic journey of this epic jewel from Golconda to London dwelling the true happenings from ‘real’ history.

Mined from a mine in Kollur (Karnataka) around 1650, it was handed over to Syed Muzzaffar, the Mir Jumla, a general at the Qutb Shahi regime, as that mine was under his supervision. Its original weight, in the uncut form, was 787.5 carats (900 rattis). Mir Jumla did not deposit it in the Qutb Shahi treasury. The rare diamond was with him when he deserted his master, over a trivial issue, to proceed to the Delhi Sultanate, then ruled by Shah Jahan. To take revenge on his former ruler and please Shah Jahan, he gifted it to his new Mughal master.

According to Tavernier, Koh-i-Noor subsequently had lost much of its original weight and was reduced to a mere 279.9 carats (319.5 rattis). This drastic weight loss was due to wasteful grinding treatment to which it was subjected by a Venetian diamond cutter, Hostenrio Borgio. The deceitful diamond cutter might have broken the diamond into pieces (what happened to other part remains a mystery). Shah Jahan gratefully accepted the diamond and sent it to the treasury.

During the reign of lesser-known Mughal ruler, Muhammad Shah Rangeela, Nadir Shah invaded India and reached Delhi in 1739. Afraid of the loot of the treasury, Muhammad Shah thought it to be safe to put the precious diamond in his turban. Historians narrate that when both the invader and the invaded met and exchanged pleasantries, Nadir Shah cleverly told Mohammed Shah that it was customary in his tribe and country to exchange turbans as a mark of friendship. Muhammad Shah was helpless and, thus, Koh-i-Noor went into the possession of Nadir Shah and, with him, left its motherland.

In 1747, Nadir Shah was murdered in Kolat, Afghanistan. In 1757, his reign and throne were passed on to his grandson Shah Rukh, who was living in Mashhad (Iran). The generous heir gifted the diamond to Ahmed Shah Durrani, ruler of Afghanistan, for saving his life. Durrani endowed this prodigious piece to his successor Timur The Lame and in 1793, Timur’s successor Shah Zaman received it.

When Shah Zaman was deposed and imprisoned, he concealed the diamond in the mid-wall of the prison. When his brother, Sultan Shuja ascended the throne of Kabul, Koh-i-Noor was taken out of the prison and worn in a bracelet.

Historian Elphinstone happened to see Koh-i-Noor in 1809, when he met Shah Shuja in Peshawar. He considered himself very fortunate to have sighted the precious diamond. When Shuja was dethroned, he fled to Lahore where he sought the help of Maharaja Ranjit Singh, the ruler of Punjab, to get back his lost kingdom. Maharaja Ranjit Singh demanded Koh-i-Noor for the favour. Now, after many decades, Koh-i-Noor returned home – not exactly its birth place, but the country to which it belonged originally.

Maharaja Ranjit Singh wore it in a golden bracelet on official functions. On the death of Maharaja in 1839, his son Dilip Singh, as a successor, received the golden bracelet, which was finally kept in the royal treasury of Lahore.

In 1849, the British East India Company was engaged in the second Sikh war with Dilip Singh. The company conquered Punjab and to recover the debts, the royal treasury was seized. Once again, the diamond went into the foreign lands. Viceroy Lord Dalhousie presented Koh-i-Noor to Queen Victoria on July 3, 1850. The second foreign journey of the diamond started in 1850. In 1851, it was displayed in an exhibition at the Crystal Palace, London. As the diamond had changed so many hands, it lost its lustre and glitter, so the queen decided it to get it recut. The work was done by General Company, who employed Voorsanger, a diamond cutter from Amsterdam. The cutter reduced the weight from 279 to 108.93 carats. Though it lost its weight considerably, it got back its shine and brilliance. The present shape of the diamond is round.

In 1937, the Koh-i-Noor was set in the royal crown of Queen Elizabeth, having travelled so far and for so long and losing more than 50% of its original weight, probably, the diamond got exhausted and now is resting in the tower of London along with crown jewels. #KhabarLive