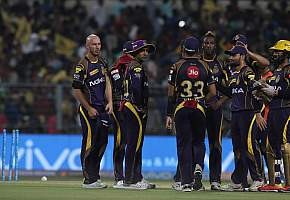 It’s still early days in the Indian Premier League, however, there are specific patterns of play that are emerging out of the franchises as they make gradual progress into the tournament. Kolkata Knight Riders and Sunrisers Hyderabad have finished playing a couple of matches and both teams would be aware of the rights and wrongs that have come to the fore from the two outings.

While KKR can feel at home with their batting exploits, SRH will feel a similar comfort around their bowling. However, there’s a common ground where both are struggling and that is their fielding.

SRH dropped as many as three catches on Thursday night, and luckily none of them cost them much, but they would be aware that it won’t pan out the same way every time. KKR, too, have been let down by fielding errors but the difference being, their missed chances hurt them to the extent of costing a game. Sam Billings was dropped on 9 and he went on to score a 23-ball 56, a match-winning knock; skipper Dinesh Karthik missed running Ravindra Jadeja out on nought, and he landed the winning hit with a ball to spare.

On the batting front, KKR will be happy to see almost all their batters having a hit and also getting some sort of a score under the belt. While Sunil Narine hogged all the limelight in the opening game, Karthik and Nitish Rana flew under the radar, scoring critical thirties to seal the match in their team’s favour.

The second game saw Andre Russell announce his grand arrival with a scintillating 36-ball 88. Robin Uthappa, too, had looked good, and the explosive Chris Lynn got some game-time too, without teeing off as yet. But it’s not KKR’s batting which would be causing them a headache, it’s their bowling which has blown hot and cold in the limited sample size of two matches.

ALSO READ:  How Is An 'IVF Pregnancy' Different From A 'Natural Process'?

The most interesting case study though would be how KKR have seamlessly gone back to their original strength – spin. When R Vinay Kumar was smashed for 14 in his opening over against Royal Challengers Bangalore, Karthik employed six straight overs of spin to constrict the run flow – 40 runs in those overs. Similarly in their second game, CSK got off to a stellar start with 79 runs from the first seven overs.

In the six overs to follow, with Narine, Kuldeep Yadav and one over of Piyush Chawla, KKR pulled things back under control by giving only 33 runs and snaffling two wickets. How long can their spin troika cover up for the absence of a quality death-overs specialist will determine the distance KKR travel in the tournament.

SRH have problems of their own. Their batting is heavily dependent on Shikhar Dhawan, and in both the outings so far he has taken the heat off others around him. If the law of averages had to catch up with the flamboyant southpaw at some point, there will a lot of pressure riding on their middle order. While there’s the calm presence of Kane Williamson at No. 3, and the hard-hitting abilities of Shakib Al Hasan, Yusuf Pathan and Deepak Hooda in the middle, the fulcrum of the lineup will be Manish Pandey, on who the franchise splurged a whopping INR 11 Crore. Both Pandey and the team would hope that the unwarranted risk he took against Mumbai Indians the other night was the only instance of recklessness they would see in the remainder of the tournament.

SRH boast of envious bowling resources. The terrific form of Rashid Khan and Siddarth Kaul ensures its unit’s good health, while Sandeep Sharma who stepped in for Bhuvneshwar Kumar in the previous game, did all that was expected of him.

What to expect: Eden Gardens is a furnace at this time of the year and with a maximum of 37 degrees and humidity of close to 60 per cent, the players would be in for another tough evening in the center. If the close lying Ganges brings in some respite, life would be a tad easier. There’s a trifle chance of a thundershower in the afternoon, but that shouldn’t be much of a worry.

Team News
Kolkata Knight Riders: There couldn’t have been a more gripping screen test than the one that was on display on Friday afternoon. After the poor final over at Chepauk, Vinay Kumar was pitted with Under-19 pace bowling sensation Shivam Mavi on the same strip with bowling coach Heath Streak keeping a close tab on the action. There shouldn’t be much doubt that either of them will take up the lone Indian pacer’s slot. Mitchell Johnson, who was out with a niggle and bowled for a while on the eve of the game, should walk back into the eleven, too. West Indian Javon Searles had his first long training session on tour, on Friday, and did enough to keep everyone guessing about KKR’s pace combination.

Sunrisers Hyderabad: The only bone of contention for SRH would be Bhuvneshwar’s sore back that kept him out of the previous contest. If he is fit, however unfair it may look, he will come in place of Sandeep Sharma, who will have to make way despite his fine 2 for 25.

Head to Head – KKR 8 – 4 SRH
Interesting face-offs
Dhawan vs Johnson: Dhawan has been out to Johnson thrice in 26 deliveries, scoring just 22 runs. He averages only 25.11 against KKR – the least amongst the seven opponent teams.

Vinay vs Yusuf: Vinay has dimissed Yusuf Pathan four times in the IPL.

Approaching milestones:
Sunil Narine needs three wickets to become the third foreign player after Lasith Malinga & Dwayne Bravo to take 100 wickets in IPL. If he achieves the feat, he will be the 11th overall to do so.

SRH have lost all their five matches against KKR in Kolkata.

What they said:
There is very little time to change things too much. We have addressed the [fielding] issue and this is something all players are aware of. At the end of the day, it’s one skill that all the players can contribute. We are wishing for the best in the forthcoming game – Dinesh Karthik, Captain, Kolkata Knight Riders.

Dot balls are crucial in such a short format. That was the plan to bowl as many dot balls as possible. I just try my best to bowl in good length areas and mix it up for the batsmen. As he’s in his stance, I can see where he’s trying to hit. Love to bowl both, the leg-spinner and the googly – Rashid Khan, Sunrisers Hyderabad. #KhabarLive