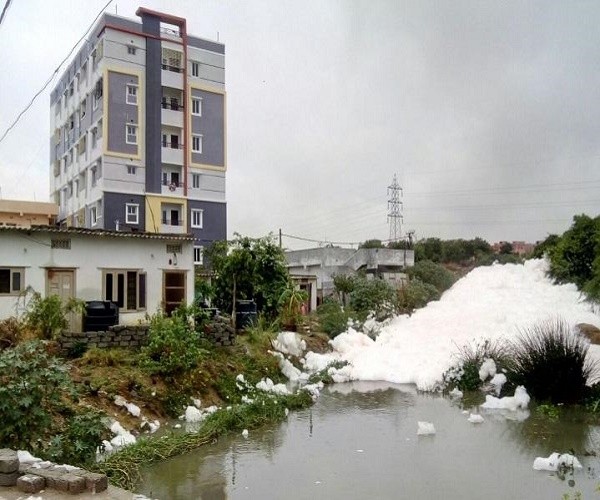 Hyderabad’s Dharani Nagar nala is notorious for frothing and has been in the news repeatedly due to this, in the past. While overnight showers in Hyderabad brought respite to several citizens in the city, it also returned to haunt residents of Dharani Nagar in Kukatpally.

Following a spell of showers in the area, a large amount of froth accumulated near the drain or ‘nala’ in the residential area and threatened to enter their homes.

The Dharani Nagar nala, which is an outlet of the city’s Parka Cheruvu (lake), is notorious for frothing and has been in the news repeatedly due to this, in the past.

The small drain eventually branches out into the Kukatpally nala, which is one of the four major nalas that dump industrial effluents into the Hussain Sagar Lake, and eventually the Musi River. The other ones are the Balkapur nala, Banjara nala and the Picket nala.

Local residents say that the polluted water gives them rashes and skin infections and many are forced to abandon their homes during the rainy season, as overflowing water from the drain enters inside and washes away their belongings.

Speaking to KhabarLive, Kaajamma, whose house lies just next to the nala, said, “All the residents of houses near the nala picked up our belongings and slept at a nearby shed with our children. We were petrified all night, praying that the froth did not enter our homes.”

In September 2016, when Hyderabad witnessed floods, residents of the small colony said that thick froth covered every house from top to bottom, and washed away vessels, supplies, food, clothes, and other belongings completely.

Kaajamma also alleged that officials of the Greater Hyderabad Municipal Corporation (GHMC) had demolished a wall of her house around a year ago, to facilitate temporary relief measures, and left without giving her any compensation.

“Till now that wall is broken. The water stinks of chemicals. If this is the situation for one day, imagine what we are supposed to do for the next three months,” she added.

“So many officials come and speak to me every time this happens and promise that they will build a wall and stop the froth from increasing. Despite this, each year, it only gets worse. They do not seem to care for us,” she says.

In the past, the PCB has claimed that the frothing was a result of detergents and phosphates used by the residents.

Speaking to KhabarLive, Dharani Nagar Welfare Association President Mahender Reddy also echoed the same thoughts. “Lot of promises have been made but they are yet to be fulfilled. We are really tired of political inaction and the laxity of officials,” he said. #KhabarLive