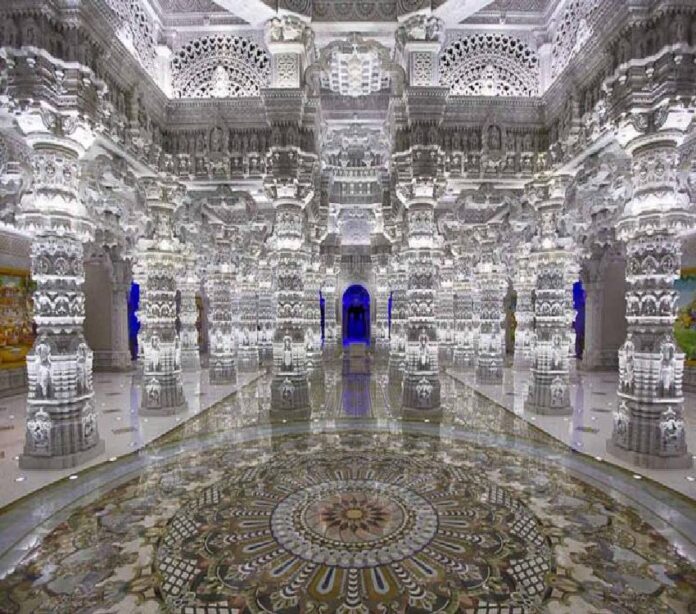 While the Hindu organisation BAPS has refuted allegations of violating Dalit workers’ rights, temple workers have said that this is not a unique instance.

Last week, an appalling incident of alleged trafficking of Dalit workers from India to the US came to light. Following complaints from workers involved in the construction of a temple in New Jersey, FBI agents and other US federal government officials had landed at the temple that was being built by the Hindu organisation BAPS (Bochasanwasi Shri Akshar Purushottam Swaminarayan Sanstha). The organisation has been accused of serious violations of US immigration and labour laws, including forced labour, confiscating workers’ immigration documents, and paying them meagre wages.

BAPS, which calls itself “a socio-spiritual Hindu organization with its roots in the Vedas”, is known to be a wealthy, influential sect with close ties with the BJP and Prime Minister Narendra Modi. Representatives of BAPS have refuted the allegations, and right-wing groups and BJP supporters have tried to deflect the blame from BAPS to a US construction company. Countering this narrative, Pathar Gadhai Mazdoor Suraksha Sangh (PGMSS), a union of temple construction workers, have called attention to the continued exploitation of Dalit and Adivasi stone carvers who were also involved in temples constructed by BAPS across the world.

How the New Jersey temple case came to light?
BAPS has built several extravagant temples around the world (US, UK, New Zealand, Australia, Kenya, India), with intricate stone and marble carvings which attract not just members of the sect and Hindu devotees, but also other tourists. The temple now under contention is located in Robbinsville, New Jersey, and was opened by BAPS to the public in 2014. Construction work has continued since then, with plans to make it the largest Hindu temple in the US, according to reports.

ALSO READ:  How 'Practicing Religion' On 'Public Places' Can Violate The Law?

On April 30, construction at the temple was halted due to a stop-work order issued by the New Jersey Department of Labor, which found several workers’ rights violations at two BAPS temples in Robbinsville and Edison, based on workers’ complaints. The stop-work order was issued to Cunha Construction Inc., a US construction contractor. However, the lawsuit filed by six Dalit workers on behalf of themselves and several other workers, accuses BAPS of many shocking violations of US labour laws. Swati Sawant, an immigration lawyer in New Jersey, told New York Times that she learned of the issue last year, organised the temple workers in secret since then and arranged legal teams to pursue action against BAPS.

The nature of allegations
The lawsuit has been filed by six Dalit workers from Rajasthan — Mukesh Kumar, Keshav Kumar, Devi Laal, Niranjan, Pappu and Brajendra — on behalf of themselves and nearly 200 other Indian workers, many of whom also belong to Scheduled Caste communities. According to the lawsuit, it was BAPS, and not the US construction firm, that was responsible for recruiting workers from India, who were interested in stonework and construction jobs. Workers were often recruited through agents connected with BAPS, according to the lawsuit. It said there were also direct recruitments, like in the case of Pappu, who was allegedly recruited by a man named Bharat Bhai, a supervisor of workers at the temple site, who promised better work and salary in the US.

Although they were being recruited to perform manual labour, they were taken to the US on religious visas (R-1 visas, meant for members of the religious denomination sponsoring the visa holders working in religious vocations.) BAPS personnel allegedly told US authorities that the workers were religious “volunteers”, and coached the workers before their visa interviews, to say that they were going to do “volunteer work…as a service to the deities” and that they would not be paid for their work. On reaching the US, the workers’ passports and visas were allegedly confiscated by BAPS agents and never returned to them throughout their stay in the US.

Contrary to what they were promised, the workers were allegedly paid only $450 per month for doing demanding work like cutting and laying stones, removing garbage, road work, dipping stones in chemicals etc. for years, for more than 87 hours per week. They were allegedly made to work even in rain and snow, with only one day off every 30 to 40 days.

The hourly wage amounted to around $1.20, the lawsuit claimed, which is much below the minimum wage protection in the US. One of the workers, Moham Lal, allegedly died while being subjected to forced labour at the temple. The workers also alleged that they were forced to live in crowded trailers in a fence compound, under constant surveillance by BAPS agents. The supervisors allegedly warned workers against speaking with outsiders, and told them that police would arrest them if they went out of the temple complex as they didn’t have their passport. Supervisors at the temple site would allegedly fine workers and further reduce their meagre pay for violating minor rules, including talking to outsiders. They were also allegedly made to provide financial guarantees for co-workers travelling to India, to ensure they returned to work at the temple.

The workers also alleged caste-based verbal abuse, citing an incident where one of the supervisors, Swami Prasanand, called the workers “worms”.

Deflecting blame
Kanu Patel, CEO of BAPS, who was  also named in the lawsuit, told New York Times that he disagreed with the wage claim filed by the workers. Right-wingers have been trying to defend the Hindu organisation by shifting the blame to the construction firm named by the New Jersey government in its stop-work order. Disputing these claims, the Pathar Gadhai Mazdoor Suraksha Sangh (PGMSS) has said that in the case of many temple workers who have worked on BAPS temples in various US cities, had only interfaced with BAPS representatives, and never with the construction firm.

“Workers interact with, are ‘disciplined’ by, follow rules set by BAPS representatives,” the union said. The group has also called attention to the caste hierarchies within the temple building industry in the Rajasthan-Gujarat region.

Following the visit from US federal agents, about 90 workers were removed from the site, New York Times reported. The temple has since been closed until further notice. #KhabarLive #hydnews