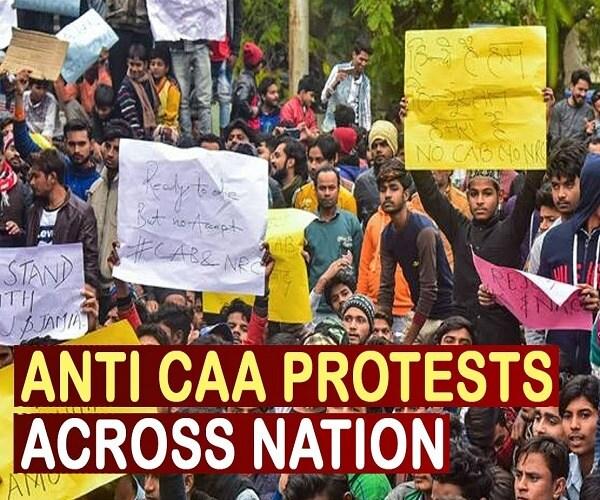 The ongoing protests against the Citizenship Amendment Act (CAA) is becoming the big trouble for Modi government as the Act has taken the centre stage in Indian politics owing to the unrelenting insistence of the BJP and continuing resistance to it from the opposition.

There is a never-ending debate on the content of the Act and its supposed adjuncts like the National Register of Citizens (NRC) and the National Population Register (NPR). The obscurantism and obfuscation on it by the ruling party despite resistance from the public is perplexing. Surprisingly, the government is not even willing to have a dialogue and just wants to go ahead with it.

The Act came into force from December 10, 2019, but so far it has not been made operational. The rules and the procedure for implementation are not ready. Most importantly, the list of eligible immigrants from — Pakistan, Afghanistan and Bangladesh – belonging to the select six religions too is not available. They need to be handpicked from the large haystack of illegal immigrants. It is not known what method the government will use to do it.

Many Problems
The alternative proposal of modified NPR method also has come under fire. People have become so suspicious that they are unlikely to cooperate with it, affecting even the regular survey for the census. Without identifying the prospective citizens under the Act, the CAA cannot be implemented. The government needs to adopt a practical method to identify them and with least disruption to peoples’ lives.

India has no definitive policy on illegal immigration. It’s also not a signatory to the UN or other international laws on the subject. The illegal immigrants are all mixed up with the Indians and most of them have various identity cards like Indian citizens. It is also difficult to prove their country of origin.

Who’s Citizen
It is certainly necessary to identify the illegal immigrants in a country and deal with them suitably. All countries have an immigration policy depending on their demographics and other considerations. They can vary widely like from the US to Russia.

It’s time for India to have a definitive immigration policy. But it should be done methodically. First, we should define our immigration policy. Secondly, it should be in sync with international migration/refugee laws to enable smooth implementation. Third, the country needs to take stock of its illegal immigrants and pass the necessary laws to deal with them. Then comes the process of granting or denying citizenship as per the stated policy. Thereafter, we should explore all possibilities of sending back immigrants to their countries. We should treat them as per the international conventions. This is the logical process in a democratic country.

But what is happening now is far from it. An amendment to Citizenship Act is made to extend citizenship to illegal immigrants, but it is partial and restricted to select country immigrants of certain religions. This select group constitutes only a small part of the total number of immigrants. Their details are not available and to get it, the government intends to sieve the entire nation with the confounded NRC.

Without the census of illegal immigrants, it is not possible to implement the CAA. In fact, the logical step should have been to bring the amendment only after the census of illegal immigrants and the identification of the select group is completed. But it is kept dangling to reap political advantage. Now the census in the shape of NRC is proving to be cataclysmic. The attempt of doing it via the modified NPR also seems to have backfired.

Vote Gathering
Meanwhile, the BJP is using the CAA and NRC for netting votes. It is not willing to talk to the protesters but is engaging in political excursions elsewhere to explain the ‘egalitarian’ intent of the CAA stating that it’s not against Muslims as it is not said so in the Act.

But what happens to the illegal immigrants other than the select group like Tibetans, Sri Lankans and those from Myanmar, Pakistan and Bangladesh. It will be good to send them back, but can it be done? There is also the danger of some original inhabitants of India being declared as illegal, as has happened in Assam.

It will be a herculean task to conduct the NRC. Even if it is done, it will not be easy to deal with the multitudes of immigrants left out of the CAA. At least now, they are part of the nation contributing their mite to the nation’s GDP. If the government keeps them in detention camps and feeds them, it can be a double whammy burden to the nation. As for the national security slogan against the immigrants, it does not hold much water. Even many of our original citizens are selling our defence secrets and collaborating with terrorists. The law of the land has to take care of it.

The better path is to formulate a definitive immigration policy and implement it in letter and spirit to stop illegal immigration. Grant citizenship to all the immigrants who are inside the country except those that can be repatriated legally to their original countries or are inimical to national security. That will save the country from the anarchy being promoted by the CAA and the threat of the dreadful NRC. The government does not have any better option since the CAA in the present form is simply not implementable. #KhabarLive