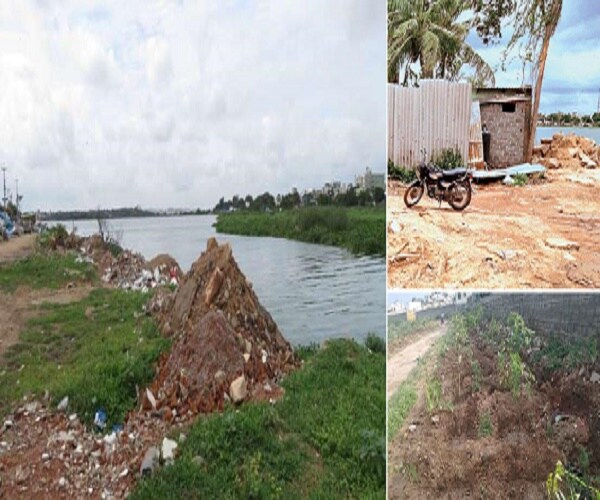 The historic Mir Alam Tank development is being hampered by land encroachment and lack of coordination between various departments, especially among GHMC, R&B and Irrigation wing, is posing a grave threat to water bodies in and around the city and causing the wastage of public money spend on rejuvenation projects.

The latest example is the controversy brewed when the GHMC took up plantation drive at Mir Alam Lake, where the works of diversion canal were in progress. It had to be stopped following complaint lodged by Irrigation department with the Urban Bio-Diversity Wing.

The irrigation wing is busy in the construction of a diversion canal around the lake with an outlay of Rs 40 crore to draw the sewage flowing in from upstream areas into canal and redirect it to Sewerage Treatment Plants (STPs), set up around the water body. The initiative was taken up under Mission Bhagiratha in order to make the water bodies fully secure from pollution and stink, thereby helping the environment.

However, to much of the surprise of officials of Irrigation Department, the GHMC has started planting saplings on the route close to compound wall of the lake blocking the way for the construction of the diversion canal. It is believed that the GHMC officials were completely unaware of the on-going construction work around the water body either due to lack of coordination with the irrigation wing or they simply overlooked the works.

When #KhabarLive contacted, the Deputy Director for Charminar Zone at Urban Bio-Diversity Wing Chandraiah said, “We have halted planting saplings soon after knowing the issue.

Will make a joint inspection tomorrow to examine the situation and plan relocation of saplings to pave way for the smooth conduct of on-going works of diversion canal.”

This is not the lone case of lack of coordination between the line departments. A Few months ago R&B too has taken up works of slab culvert near Mir Alam filter to increase the outflow capacity of the already existed small pipeline through which the sewerage flowing from upstream areas like Teegal Kunta and Chashma have been redirected to the water body for several years.

“Though the irrigation department approached the R&B on more than one occasion, the R&B department is yet to pay any heed to the issue and is continuing the works close to Mir Alam Filter, posing a great risk to the historic lake,” said an official at Irrigation Department.

Now, he added, we are facing another hurdle in the form of plantation on the route of diversion canal. We can’t tell how many more issues we have to face till the completion of the work meant to protect the water body from all sorts of pollution, he bemoaned.

On the other side, the serious allegation of ‘Mir Alam Tank Being Encroached’ titled Amjed Ullah Khan, spokesperson of Majlis Bachao Tehreek (MBT), took on twitter to highlight encroachments taking place at the Mir Alam tank.

He said, “There has been massive encroachment of this talab by land grabbers with help GHMC and revenue officials.” He alleged that in spite of the Telangana HC asking for a detailed report from the state regarding the protection of lakes “the encroachment of Mir Alam Talab goes on under political patronage.”

When contacted, Khan said that high profile politicians were involved in the land grab which has come to light over the past few days. He demanded that the government take up minimum action by setting up a police picket and placing cameras in the area.

ALSO READ:  What Can You Get In Rs.100 'Street Shopping' At Charminar In Hyderabad?

He also alleged that the size of the lake had shrunk significantly since its construction in the early 19th century.

While in a 2014 survey, the lake which has been notified, was measured as being 405 acres up to FTL, Lubna Sarwath ex-convenor, Save Our Urban Lakes, said, “This is a massive reduction from the 850 acres measured in 2000 under the Hyderabad Urban Development Authority. “No matter who is encroaching the lake, it is the government that is to blame. Once the lake has been notified, no encroachments can take place on it,” she said with regards to the issue of encroachment.

Environmentalist Subba Rao said that following demolitions in the early 90s by some sincere officers, not much has been done to save the water body. “Contractor-officer lobby is well entrenched in the area,” he said.

Ashok Reddy, MD, Musi River Front Development Corporation, responded to the tweet by Amjed Khan stating: “Will enquire and take action. We have closed the entry gate and locked it.” Speaking to #KhabarLive, he said, “I have sent a team to visit the lake and take stock of the situation.” #KhabarLive