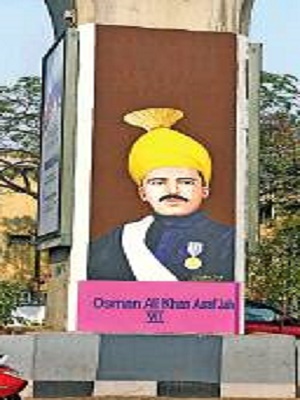 About half a century after his death, Mir Osman Ali Khan, Nizam VII, finally gets ‘official recognition’ from the state. His portrait now adorns pillars of the Hyderabad Metro rail at Begumpet, near Spanish mosque. Though this is a small gesture, it’s the first time that the portrait or photograph of Mir Osman Ali Khan, the architect of modern Hyderabad, adorns a public place in Hyderabad.

The last time there was an ‘official’ praise of the Nizam was on February 24, 1967, when he passed away at King Kothi. There was official mourning, state funeral and a general holiday as a mark of respect to Osman Ali Khan, whose dominion was the biggest among all princely states in British India. Since then he has remained unsung, at least in official corridors.

The last ruler of the erstwhile princely state of Hyderabad has never been remembered by the state government in the last 51 years. Though the Nizam served as the Raj Pramukh (governor) of Hyderabad state for five years from January 26, 1950, Osman Ali Khan’s name was relegated to history books and official archives.

Even on the 50th death anniversary of the Nizam VII last year, there was not a single word of reference from the state government.

During the centenary celebrations of Osmania University in April 2017, none of the speakers, including VVIPs and university authorities, bothered to take his name, notwithstanding the fact that the grand edifice of higher learning was his brainchild. Osman Ali Khan had hired the best brains to teach students and the best of architects to build the magnificent Arts College building.

In the last 50 years his name was taken more often in the negative. Only on a couple of occasions, the Nizam’s contribution to the development of modern Hyderabad was recognised during debates in the state assembly. When statues of prominent personalities were erected on Tank Bund, Osman Ali Khan was conveniently forgotten. However, the statue of his father Nizam VI, Mir Mahbub Ali Khan, was set up.

“It’s appreciable that the authorities concerned have put up the portrait of Osman Ali Khan ahead of his 51st death anniversary on February 24. I appeal to chief minister K Chandrasekhar Rao to set up Osman Ali Khan’s statue on Tank Bund and rename KBR Park after the Nizam,” said Nawab Najaf Ali Khan, Nizam’s grandson.#KhabarLiveNizams’ Of Hyderabad

ALSO READ:  Are You Trying To Lose Weight And Reduce Belly Fat Before The Wedding? 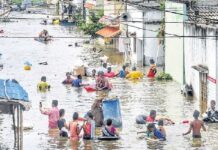 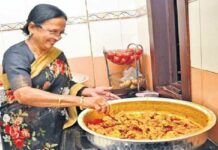