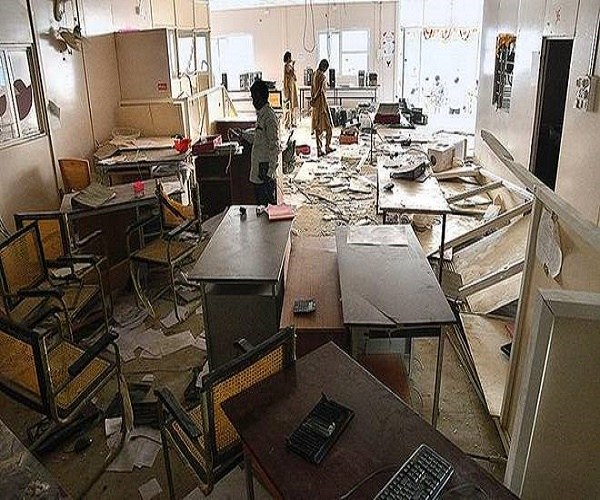 Ambulance arrives 45 minutes after workers fell from the 10th floor of a State-owned under-construction building in Rampally village was not fully exploited. The co-workers of the five men who died after falling from the top of a building, said that Saiful Haq (27) and Milan Sheik (20), who were alive after they fell on the ground, died due to the late arrival of an ambulance on the spot.

They alleged that there was no ambulance or other medical facilities on the premises, whereas as many as 6,240 double-bedroom houses are being built for the poor. “We rescued them after being trapped under the metal platform. They were alive and died while being shifted to the hospital,” said Mohammed Yavr Miya from West Bengal. He also alleged that the contractor did not provide them with any safety equipment.

Further, they told #KhabarLive that due to lack to latrines and sanitation they are forced to relieve in the open. “About two months ago, Shivraj Singh of Jharkhand, who had gone to relieve himself died after being hit by a speeding train, while crossing the tracks,” said Pramod Sharma.

Further, recalling another incident, Manik Malitsa, who also hails from West Bengal said that a few weeks ago, a labourer fell from the 9th floor of the10th blocks on the site and is completely paralysed now.

In a similar incident, which took place nearly three months ago, a man from Jharkhand, who was oiling the metal sheets also fell down from the top of a building, but so far, the company did not adopt any safety measures, said Davin Burman from Siliguri in West Bengal.

Earlier in the day, the workers vandalised the office of DEC Infrastructure and Projects (India) Pvt. Ltd. as the sub-contractors reportedly asked them to resume the works, before the bodies were shifted to the hospital. #KhabarLive