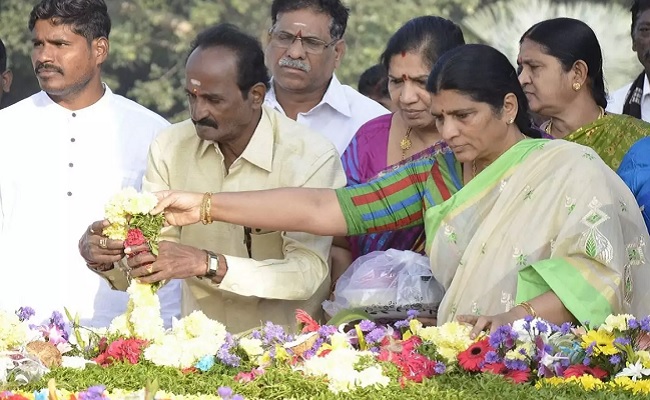 This was announced by his widow Nandamuri Lakshmi Parvathi, while speaking to media after paying homage to her late husband at NTR Ghat in Hyderabad.

“Little NTR was born in my house in the form of my grandson. I am sure he will get inspiration from my husband and I pray the Almighty to see that NTR’s blessings will always be there on his grandson,” Lakshmi Parvathi said.

Already, there are too many claimants for the legacy of NTR – right from popular actor Junior NTR to Kalyan Ram to Taraka Ratna to Mokshagna. Now, here is yet another grandson of the legendary actor.

However, Lakshmi Parvathi’s grand son is not exactly a descendant of NTR, as she had no child from NTR. The present grandson was born to her son, who happens to be the son of Harikatha exponent Veergandham Venkata Subba Rao.

So, strictly speaking she cannot claim her grandson as a successor of NTR. But since she officially married NTR, she is able to say a Little NTR was born in her family! #KhabarLive #hydnews