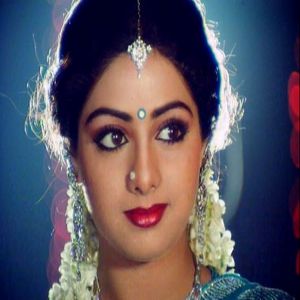 An actor beyond compare. Sometimes, the journalist within me takes a backseat when it comes to intruding into the privacy of a person like Sridevi. I met her at the Cairo International Film Festival some years ago. She was an invited guest along with husband Boney Kapoor and their two daughters. But the way the Indian bureaucrats’ wives crowded around her to click a picture together and the way they drooled made me refrain from approaching her for an interview.

She would have agreed I know but I was not there at Cairo to interview her. I was invited to present a paper on Bollywood cinema. She flashed her mesmerising smile at me through those diamond studded awe-struck ladies. By then, my face was a bit familiar for her. The interview never happened and I lost a golden opportunity.

At the inauguration, invited to present herself on the stage, she was grace personified, draped in a golden lame sari and matching blouse and as she glided to the front, she folded her hands in a namaskar and the house burst into loud applause. Just before the release of her last film Mom, I managed to squeeze in a few questions in the midst of a press conference in Kolkata. But it was not a one-to-one.

What captured my attention was her performance in Himmatwala (1983) when I was a budding journalist struggling to keep my teaching job and running against deadlines. The glamour, the chutzpah, the dance performances cinematographed against bright lighting in loud colours did not blur that beauty wrapped in short ghagras around thunder thighs holding forth against Jeetendra, then a top star and hitting it at the box office.

The film was a remake of a Telugu hit Ooruki Monagadu (1981) starring Krishna and Jaya Prada in the lead. Himmatwala was one of the biggest blockbusters of the 1980s. The song-dance duet naino mein sapna still resonates among listeners of old Hindi hit songs on radio and television. The recent remake directed by Sajid Khan starring Ajay Devgun turned out to be a flop.

Of the nearly 300 feature films in five Indian languages she featured in, the fingers of both hands would not suffice to pick out her best performances because she was one of the most versatile actresses to grace the Indian screen. Her glamour remained unblemished even when she portrayed the mentally retarded teenager in Sadma (1983) directed by Balu Mahendra opposite Kamal Hassan who bagged the National Award for Best Actor for this film.

The film is a remake of the 1982 Tamil Film Moondram Pirai, starring Kamal Haasan and Sridevi. Sridevi’s autistic child-woman performance is considered one of the finest performances of her career. The film flopped at the box-office, but achieved cult status and is regarded as an all time classic featuring Kamal Haasan and Sridevi’s best performances. It had a moving song surmain ankhyon mein nanha munna ek sapna dekha rendered by Yesudas. It was captured on the leading pair which remains a classic not only in terms of its music and its lyrics, but also in terms of the picturisation and the positioning and direction. This marked the debut of Ilaiyaaraja as a music director in Mumbai.

Mr. India (1987) is Shekhar Kapoor’s only hit film in his career. The film was produced by Bonny Kapoor and no one had inkling that this producer would later become Sridevi’s husband. On the centenary of Indian Cinema, Mr. India has been declared one of the 100 Greatest Indian Films of All Time.

Sridevi played Seema Soni, a bubbly and perky journalist who, after initial skirmishes falls in love with the hero, Anil Kapoor as the invisible man. Her bubbly self came to the fore enriched by one of the most memorable dance numbers in the history of Indian cinema. She held her own in a major role against pillars like Amrish Puri, Anil Kapoor and the then slowly growing Annu Kapoor who portrayed the eccentric editor of the paper she works in.

But the highlight of the film was her wonderful dance Hawa Hawai. Though the film was dominated almost entirely by Amrish Puri and Anil Kapoor, Sridevi did not permit their characters to marginalise hers in any way and even after 31 years, no one can forget her Hawa Hawai number.

The list is endless. Being labelled the first female Superstar is no mean joke where Sridevi is concerned. In a male-dominated industry, she rose about the films she featured in and reached beyond the scripts she was given in one film after another. The story goes that personally she was a shy person and did not believe in retakes during shoots. For her, it had to be just one take because she felt inhibited by repeat takes.

Chandni marks another of Sridevi;s finest performances. She plays a very young beauty, throbbing with life whose life changes when she finds herself trapped between her fiancé believed to be dead who comes back changed to a wheelchair and her current friend who wants to marry her. The film was one of the biggest box office hits of 1989. It won the National Film Award for Best Popular Film of 1989.

The same year, she featured in Chaalbaaz in a double role which was a remake of the old Hema Malini hit Seeta Aur Geeta. Filmfare ranked Sridevi’s performance in Chaalbaaz 4th in its list of ’80 Iconic Performances of Hindi Cinema’ stating that “Sridevi´s penchant for giggles and her ability to look distinctly tearful when required polishes these performances to perfection. She made Sunny Deol and Rajnikant look like sidekicks in the film”. She bagged the Filmfare Award for her performance in the film.

Her double role in Lamhe (1991) as mother and daughter fetched her the Best Actress Award from Filmfare. She won five such awards during her career. She was conferred the Padma Shri for her rich contribution to Indian cinema in 2013. She performed a dance number on instrumental music (Moments of Rage) to express her anger, her angst and her agony when the man she loves rejects her and this is reported to have been shot under artificial rains when the actress was running high fever and her father had just passed away. So much for professionalism! Though the film failed to click in India, it was a grand success in UK and went on to win several awards.

ALSO READ:  Who Is GHMC Mayor And Deputy In Sealed Envelope?

In her comeback film English-Vinglish, Shridevi came out with an amazing performance. The film takes serious pot-shots at the patriarchal marginalization of an ordinary woman though she is a self-respecting earning woman. The film shows how the protagonist, Shashi Godbole (Shridevi) earns a comfortable income through her indigenous business of laddus. In the US, she gets a big ego-boost when her English teacher calls her an entrepreneur. But back home, she is made the butt of jokes because she cannot speak English fluently. Her husband has the gumption to tell her to give up her laddu business and she stares back at him and asks “why”?

Mom was her 300th film. Devki, the character she portrayed, as the step mother of a teenaged girl with a daughter of her own, is shaped as a model housewife, an intelligent working woman and an ideal combination of beauty, brains, education, attitude and behaviour. If we do not raise our eyebrows at such synthetic and unrealistic perfection, the credit lies squarely on the slender shoulders of Sridevi as a performer par excellence with a slight issue with her pronouncedly South Indian-accented Hindi and signs of middle-age that make-up could not hide.

There was really no competition between and among Sridevi, Madhuri Dixit, Juhie Chawla and Sonali Bendre. Sridevi was a class apart and will continue to stand a class apart. Her mellowness that surfaced so well in her come-back film English-Vinglish and Mom added to her appeal instead of working against it. Vidya Balan recently said in an interview “Sridevi is after all Sridevi and whether she is performing in a film or endorsing a product, she remains unique unto herself. There can be only one Sridevi.” She left her female star peers behind by proving the Shakespearean saying that “age cannot wither nor custom stale her infinite variety.”

I wish the journalist in me had taken precedence over my discretion. I will never be able to interview her ever. #KhabarLive