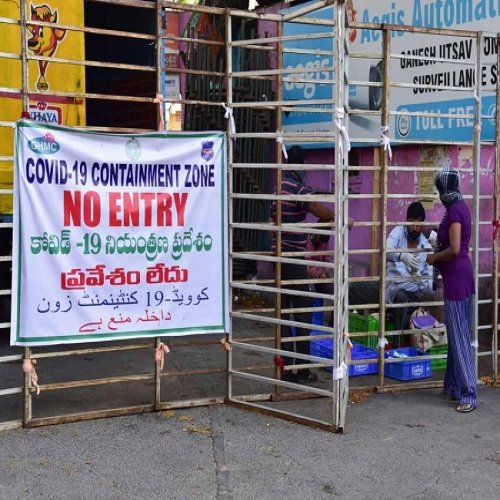 When #KhabarLive spoke to several people living inside containment zones, which are heavily guarded and where no movement is allowed in or out of that areas, about what life is like inside. A sneak peek on our ground report.

A 45-year-old Umesh hasn’t stepped out of his home for the last five days. The street in Hyderabad where he lives has been completely blocked off. Large barricades made of bamboo have been put up on one end of the lane, while the only entry and exit point is heavily guarded by policemen.

“There is an environment of fear. People can’t step out on the roads. There is one grocery store in our colony and only one person from each house is allowed. Whoever wants fresh air is either coming out on their balcony or their roof. The police patrol the street every few hours during the day,” he narrates.

Since March 22, Umesh, a welder by profession, has been stranded in Hyderabad’s Hafeezpet area with no means of income and no way to return to his village in Uttar Pradesh after his area was declared a containment zone.

As of today, there are over 221 areas in Telangana that have been declared ‘containment zones’, with a large chunk of them – at least 126 according to the government – falling under the jurisdiction of the Greater Hyderabad Municipal Corporation (GHMC).

These include areas like Chandanagar, Mallepally, Alwal, Moula Ali, Quthbullapur and several other places.

#KhabarLive spoke to several people living inside these zones, which are heavily guarded and where no movement is allowed in or out of the area, about what life is like inside a containment zone.

Umesh lives with his wife, three children and four other relatives who also migrated to Hyderabad just days before the lockdown in search of work.

“Now my relatives are stuck here because of me. So I have the responsibility of taking care of them. I’m feeding them if I eat and if I can’t eat, then they also cannot eat. Right now, we have enough money and supplies to last for a week at the most,” he says.

In containment zones, there are also guidelines laid down on when a person can step out to buy essentials. In some zones, only one person per house is allowed to step out. In some, it is only one person for a group of houses. The timings for the shops are also different. Many said that the shops are open only for a few hours a day and often stocks are less, though they are able to manage. In some areas, groceries are home delivered.

“There is a shop that opens around 7 or 8 am, but it shuts by 10 am. Whatever is needed has to be bought in that time itself. There is a shortage of stock and the shop is also overpricing,” Umesh adds.

While some people are being provided ration by the state government, that is not always the case.

This is not the story of Hafeezpet alone. As per a medical bulletin released on Tuesday, the GHMC zone alone has 249 active cases, with 58 discharged. And with cases rising each passing day, new containment zones are being set up in the city.

The health officials and police arrived at the narrow lanes of Bhavani Nagar at Talab Katta in Hyderabad to take into isolation 17 members of a family who tested positive for coronavirus. Authorities declared streets 7 to 11 in Bhavani Nagar containment zones and by noon, access to the area was cut off with barricades and fences.

“We are not relaxed here at all. We are extremely worried as the officials say they will start testing all those who had come in contact with those with the infection,” says Junaid, a local reporter and resident of Bhavani Nagar. “People here are more concerned about the loss of livelihood. All the people here are daily wage workers like push-cart sellers, and they are worried about how they can sustain themselves.”

Bhavani Nagar was declared a containment zone when 17 members from a family tested positive for coronavirus. A woman from the family had passed away on April 10. She had symptoms of COVID-19 and tested positive after her death. Officials are ascertaining if she had come in contact with anyone who was reported to have the infection. Besides the 17 who tested positive, officials have isolated another 24 persons whose samples were also taken.

“The officials say more people will be tested,” says Mohammad Ayub Khan, a social worker attached to the local mosque at Bhavani Nagar, told #KhabarLive. Locals have stepped up, arranging milk and vegetables to households. Here, only one person from a lane is allowed to step outside their home to get essential items in bulk for families.

“The GHMC is providing breakfast, lunch and dinner in packets to houses directly through local volunteers. The police have allowed only one pharmacy to remain open in Bhavani Nagar and only those who are in dire need are allowed to step out. The police patrol the streets every two minutes here,” he adds.

Other areas in the city where containment zones have been set up include Priya Colony, Dargah Ganj-e-Shaheedan, Humayun Nagar, Chintal Basti, AC Guards, Moghal Ground and Amba Theatre Road. The GHMC has taken up fumigation and streetwise sanitisation.

Suraj Apsingekar, a law graduate and entrepreneur who lives in a containment zone in Malakpet’s Saidabad Colony, says, “For groceries, we have a shop at the corner of the street. Limited groceries like milk, rice, etc. are being made available. If other groceries we need are not available, then it is a problem. A vegetable market is set up by the GHMC once every 2-3 days. If we need anything, they are asking us to tell the corner shop but there is a chance that there is no stock. So we have to adjust.”

“Police are asking us to stay indoors as much as possible. If we need medicines, we have to show a prescription and then they let us go to a medical store within the containment zone. The shop is a kilometre away and we are unable to take our vehicle, so that is a problem,” he adds.

In many areas, there is ambiguity on how long the restrictions will be in place. At Chintal Basti, Abdul Kadri, a poultry shop owner, is keenly waiting for the barricades to be lifted. “The person with travel history to Delhi who was under quarantine tested negative on Tuesday. Still they haven’t taken away the barricades yet over here,” he says.

For some, living in a containment zone has not really been a problem. “There’s not been a big change. Many of us are retired with our children living abroad. We are staying indoors all day; groceries and other essentials are home delivered to us. We are in touch with other residents of the colony in case anything is needed. We’re just waiting for this to end so that normalcy can return,” says a senior official from the Telangana government who is part of a small containment zone consisting of a few houses in Mahindra Hills in Secunderabad, where the first COVID-19 case in the state was reported.

But for many of those stuck in containment zones, it is an ordeal they wish would end soon.

“I was hopeful that somehow I will manage for 21 days and on April 14, I will catch a train or bus or anything and go back to my aged parents in UP. But when we heard the news that the lockdown has been extended till May 3, I broke down. It is scary. How do we manage to feed ourselves, let alone pay room rent, without any income?” Umesh asks.

“Even if they allow us to travel by bus or train for a single day, I will go to my parents’ place. They are also very worried about their children, who are stuck in a land far away from home,” he adds, his voice choking. #KhabarLive