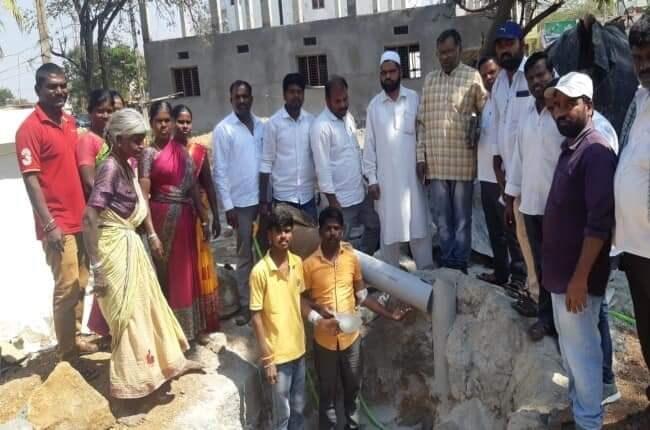 The dalit family in Siddipet district of Telangana alleges that around 40 ruling party men attacked them in a bid to grab their patta land.

“Is it wrong to construct houses on our own piece of land? All of them stormed in, abused and attacked us. My daughter and I were beaten up and they pushed me into the basement,” says 46-year-old Jayamma Byagari, a Dalit woman from Kotur of Mulugu mandal in Telangana’s Siddipet district.

Jayamma is recounting an attack by several dominant caste Hindu men, allegedly led by a local TRS leader and his allies. The incident reportedly took place earlier this week.

According to Jayamma, who spoke to #KhabarLive, around 40 men led by Chetti Suresh Goud, a local TRS leader, Guvva Sathyam and Buram Ganesh, attacked the family and obstructed the construction of their house.

The Dalit family alleges that their 18 guntas of patta land are under the threat of land grabbing by dominant castes on the pretext of safeguarding the village’s interests.

A little less than half an acre of land was owned by Jayamma’s husband Ramchandraiah. On the request of the villagers, Ramchandraiah agreed to donate 66 yards from his land for the construction of a temple. However, the main accused Chetti Suresh Goud and his allies allegedly tried to dupe Ramachandraiah of 300 yards. Their attempts were foiled and Ramachandraiah retained his land in 2007.

After Ramchandraiah passed away 12 years ago, Jayamma sold 136 yards of the plot to a neighbour for Rs 6 lakh, which she set aside for her daughter. A few months ago, Jayamma started the construction of a house next to the land which she had sold, after taking requisite permission from the Village Secretary.

Jayamma alleges that on February 18, a mob first threatened her and then attacked her family.

“They beat all of us up. They abused us, asking how Byagari people can have land near a temple,” she says.

Byagari (Mala) is a mariginalised Dalit community whose caste-based occupation used to be grave digging.

Apart from allegedly attacking Jayamma’s family, the accused are also said to have attacked another villager for buying her land. Further, Chetti Suresh Goud allegedly called the Village Secretary and threatened him for giving Jayamma a position certificate for constructing the house on her land.

Jayamma’s family went to the police and lodged a complaint. The police have registered a case against Chetti Suresh Goud, Guvva Sathyam, Buram Ganesh and 31 other persons under sections 324 (voluntarily causing hurt with dangerous weapons ), 354 (assault or criminal force to woman with intent to outrage her modesty), 504 (intentional insult to provoke and breach peace), 506 (punishment for criminal intimidation), 149 (unlawful assembly) along with Section 3(g)(w) of SC,ST Prevention of Atrocities Act.

Ashok, a relative of Jayamma’s, told #KhabarLive that the family is living in fear as threats are still being made.

“We urge the government to come to our rescue and save us, and stop our land from being grabbed. Several women whose husbands were booked by the police for their role in the matter have threatened our family that they will kill us somehow,” claims Jayamma.

Dalit-Bahujan Front’ National President Shankar P, who visited the family along with other activists following the incident, has also said that the family is living in fear. “The police should register the case as per suitable sections for assault, rampage, and arrest the culprits immediately. We also urge the police to provide necessary security to the people,” he said.

He further demanded that the TRS party should sack its local leader since the incident happened in Gajwel constituency, which is represented by Chief Minister Chandrashekhar Rao.

When #KhabarLive spoke to Assistant Commissioner of Police (ACP) P Narayana, he said that a case has been registered four days ago and that it’s under investigation.

Rajendra Prasad, Sub Inspector (SI) of Mulugu, told #KhabarLive that the six main accused have been arrested, and added that a police picket has been placed in Kothuru village in view of the situation. #KhabarLive