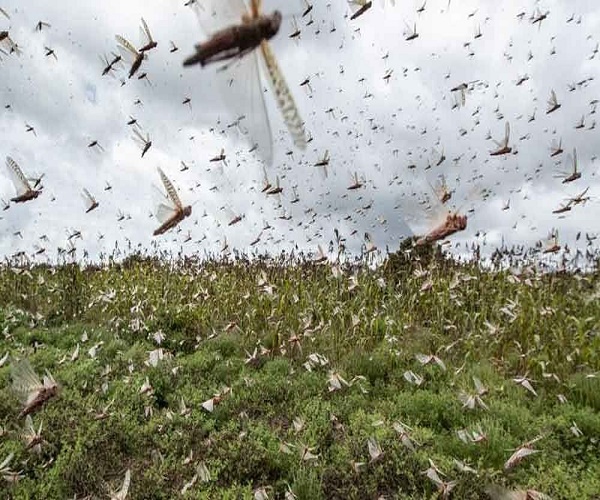 The year 2020 seems to be a year of problems. The deadly Covid-19 has taken a heavy toll on the economy. Even as both the Centre and the States are still grappling with the twin crisis, coronavirus and shattered economy, another threat seems to be looming large on the standing crops and vegetables in the country at least in five States – Rajasthan, Punjab, Haryana, Madhya Pradesh and Maharashtra.

The threat according to the Food and Agriculture Organisation is from locusts. The Union Environment Ministry warned in a statement last week that locust swarms have entered Rajasthan, Punjab, Haryana and Madhya Pradesh. It said Rajasthan was the most affected State and added the swarm had entered the country earlier than expected. Uttar Pradesh has also reported the attacks.

Locusts are the oldest migratory pests in the world, according to the Food and Agriculture Organisation (FAO). These insects are different from grasshoppers and can form swarms and can migrate over large distances. It is said that the most dangerous and devastating species is Desert Locust. They reproduce fast – 20 folds within three months.

The recent locust outbreak along the India-Pakistan border may have been driven by the longer-than-usual monsoon across the region, and frequent cyclones in the Indian Ocean, scientists say. Locusts can fly up to 150km daily and a one square km swarm can eat as much food as 35,000 people in terms of weight in a single day.

This locust outbreak FAO said is the biggest in 26 years in India. According to reports, more than half of Rajasthan’s 33 districts are already affected by these insects. They were also noticed in Jaipur. Officials of the Agriculture Department said the swarm over the city was on its way to Dausa.

Hence it has now become a cause of worry even for Telangana because if crops in Maharashtra are affected by these insects, then Telangana also stands the threat of damage since it has a long border with Maharashtra and there is every possibility of locust attack on crops this side of the border as well.

Though the Centre had issued an alert about a month ago, the Telangana government has just woken up and started discussing the measures that need to be taken. Hopefully, it will be a stitch in time and the crops would be saved lest the State will have to face another major crisis.

Across the country, the State governments which are likely to be affected have already taken precautionary measures like stepping up vigil, deployment of drones to detect their movement and held talks with Pakistan on the steps that could be taken to minimise the damage since the neighbouring country could be the gateway for swarms to attack the crops in India. The Centre is also mulling to import sprayers, satellite-derived tools, special fire tenders.

In Madhya Pradesh, scientists conducted an exercise to remove about 60% of swarms of locusts by spraying chemicals. In Uttar Pradesh, the fire brigade has been on alert to take spraying operations in case the movement of swarms was noticed. All the villagers have been put on high alert. Telangana, however, still is in the process of assessing the situation.

All that it had done so far is to form special teams to keep a tab on the border districts of Adilabad and Nizamabad to coordinate with the Maharashtra counterparts in case insects attack the fields in Telangana. The government spent hours on holding brainstorming sessions on Rythu Bandhu scheme and new crop pattern but ignored the threat from locusts.

Let us hope that the government take speedy measures to create necessary health infrastructure and at least now act fast and ensure that they gear up to meet the new challenge. Hopefully, there will be a stitch in time that could save the farmer and his produce. #KhabarLive #hydnews