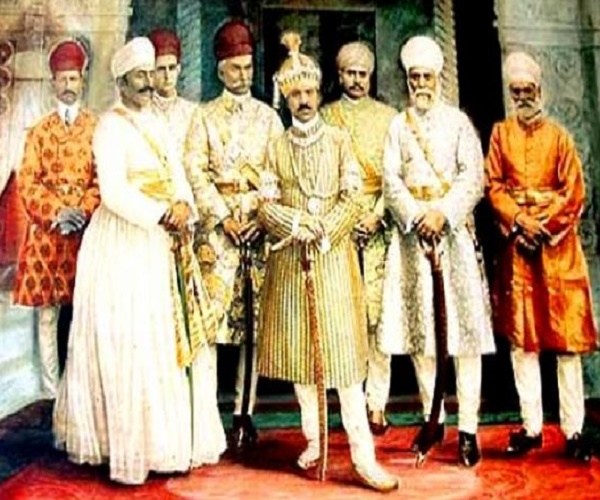 The sixth Nizam improved his poetic skills under the tutelage of Daagh Dehlvi and conferred on the latter the title of Fasih-ul-Mulk. Once when the darbar was in full attendance, the Nizam came up with a misra (one liner) – sharab seeqh pe dali kabab sheeshe mein and asked the gathering to provide the next line.

A rough translation of it reads as: threw the wine on the barbecue, the meat in the bottle. This obviously made no sense and as the bewildered courtiers struggled to come to grips with this topsy-turvy misra, the Nizam threw the challenge at his court poet, Daagh Dehlvi.

The master poet that he was, Daagh picked up the gauntlet, framed a perfect misra in no time and recited it to the astonishment of all. The famous line that completed the couplet is: Kisi ke aate hi saaqi ke hosh aise ude, Sharab seeqh pe dali, kabab sheeshe main
(The arrival of someone so befuddled the cup-bearer, he threw the wine on the barbecue, the meat in the bottle)

A similar incident which illustrates the effortless ease with which poets of yore employed their lyrical prowess pertains to the times of Maharaja Sir Kishen Pershad, the then Prime Minister under the Hyderabad State. It is said, once he was closeted with a woman and suddenly without so much as a knock, a man barged in.

The normally good-natured Kishen Pershad lost his cool and tongue-lashed the man for his impertinence. After sometime, he made enquiries and learnt that the man was Hurmuz, a poet. Immediately, Kishen Pershad offered to pardon the indiscreet act provided the poet came up with a perfect misra to the one recited by him.

Hurmuz agreed and relaxed visibly as he was now on surer grounds. Kishen Pershad, who was a versatile poet, gave vent to the thought uppermost in his mind thus:

Upon this, Hurmuz offered the next line which makes the couplet simply beautiful. He said:

The seventh Nizam, Mir Osman Ali Khan, the architect of modern Hyderabad, also contributed immensely to Urdu poetry. He sought the help of veteran poet Jaleel Manakpuri for correction of his poems. Under the takhallus (pen name) ‘Osman’, he penned nazms, ghazals, naaths and marsiyas.

His 16-line Persian nazm, written in 1950 to highlight the significance of the Republic Day, shows how he rejoiced India becoming a Republic. He penned more than 700 ghazals and scores of naaths which are published in six volumes. Sample his romantic poetry.

ALSO READ:  What If Vijayanagar Monarch 'Krishnadeva Raya' Had Survived?

Hyderabad, which exudes an air of romance, intrigue and splendour extending over 500 years, became a great cultural centre and a seat of learning, thanks to the literary dynasties of Qutb Shahis and Asaf Jahis. Under their royal patronage, Hyderabad formed the golden triangle of Urdu culture along with Delhi and Lucknow.

There is no such thing as a separate school of thought in Hyderabad poetry. It has generally been responsive to all the historical and national events – mirroring life in all its varied hues. The poetry of Hyderabad can be broadly classified into the classical phase, the progressive movement, the modern era and the post-modern period.

The progressive movement, which has marked leftist influences, emerged in 1936 and held sway up to 1960. It gave new vigour and thrust to Urdu poetry and made inroads into the literary circles of Hyderabad. The old shibboleths were discarded and, for the first time, Indian literature sought social relevance.

‘Literature for life’ became the slogan. Josh, Faiz, Firaq and Makhdoom Mohiuddin are among the harbingers of the movement. In their own way, they tried to reconstruct the social system and find solutions to the ills of society.

ALSO READ:  King Of Fruits 'Mango' The Most Delicious And Sweetest!

The progressive movement which was pursued with all the zeal of a crusade, brought a sea change in the content and diction of Urdu shayeri. For the first time, the focus shifted from ghazal to nazm and the poets stopped singing of waiving locks, chirping birds and the mole on the cheek of the beloved.

Instead, their poetry gave expression to the gnawing hunger, abject poverty and inhuman bondage. Makhdoom was the tallest revolutionary bard of Hyderabad to emerge on the national scene. He set the tone for other progressive writers and, as a result, Waheed Akhtar, Qursheed Ahmed Jamee, Shaheed Siddiqui and Aziz Qaisi moulded themselves after him.

As civilisation advances, poetry almost necessarily declines. This observation of British historian, Thomas Macaulay, seems to hold good at least in the case of Urdu poetry which now suffers from lack of patronage and mass appeal.

The ahle zoukh (aficionados) are on the decline. This, however, doesn’t mean that the prospects of Urdu poetry are bleak in the twin cities. If anything, its profile is that of an eminently victorious Caesar. But, in it could be read the portents of the decline and fall of the Roman emperor. #KhabarLive