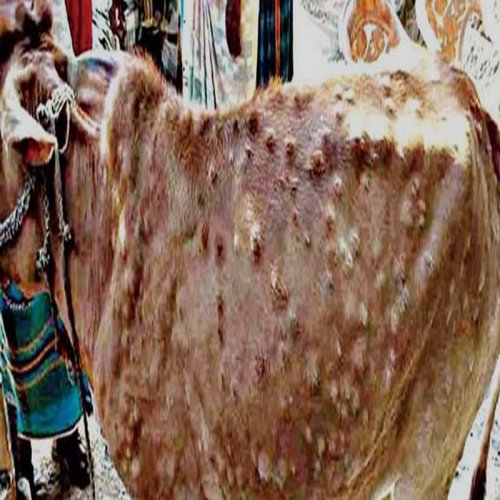 Even as the coronavirus has set off a major global health emergency, another virus is threatening cattle in India. Six cows have been reported as having lumpy skin disease and all six are dead. Two cows and one calf in Chaitanyapuri and several cows from Konaseema have died.

Cattle owners Laxmama and Balasubbaya from Chaitanyapuri, said they had noticed signs of the disease around the neck and bottom of the legs of the cows. The veterinary centre put the cows on saline for two days, but the next day the cows were dead. Veterinarian Sridaran Thirumalai says, “It was too late for the cows to completely get treated since the virus was very quick.”

Veterinarian Dr Hakeem says, “There is no specific antiviral treatment available for LSD (Lumpy Skin Disease) infected cattle. Sick animals must be removed from the herd and given supportive treatment consisting of local wound dressing to discourage flies and prevent secondary infections. Systemic antibiotics may be given for skin infections, cellulites or pneumonia, and food and water should be made readily available. Local application of insecticides to infected cattle has been made in an attempt to reduce further transmission, but to no apparent benefit.”

Veterinary microbiologist Dr Srinivas says that the Lumpy virus comes from the Pox virus (Pox family). “Lumpy skin disease is a viral disease of cattle that is spread by insects biting the cows. The virus is closely related to the pox virus of sheep and goats, and causes nodular skin lesions on the animal’s body. Lumpy skin disease generally occurs in Africa, though outbreaks have occurred in parts of West Asia. Infection may be followed by severe and serious complications.

Among more famous breeds, the Bostaurus breed of cattle is more susceptible to the disease than Bosindicus breeds, although younger animals are more often affected and show more severe disease than adult ones.”

The lumpy virus should be detected early when the pox or skin nodules appear on the body of the animal. There is fever and enlargement of superficial lymph nodes. The virus is spread between animals by biting flies and mosquitoes. Many animals in a herd will be affected but a few will die from the disease. Death rates are greater among calves.

The disease causes damage to the hide, causes loss of milk and beef production, abortions in females and sterility in bulls. The economic losses in herds with the disease are very severe.

The disease is not however transferable from animals to human beings. #KhabarLive #hydnews