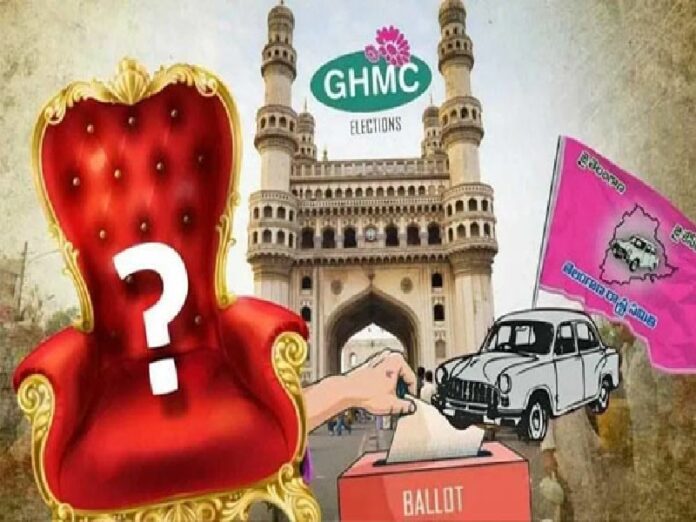 While voters in Hyderabad city have sealed the fate of all parties and their candidates who contested in the GHMC polls by casting their votes in ballot boxes this time, each of the major political parties is busy assessing its own prospects of bagging the GHMC Mayor post by scrutinizing booth-wise ground reports on polling pattern.

The counting of votes will take place on December 4.

Although TRS, AIMIM, BJP, Congress, TDP and Left parties contested the civic body bpolls, the main fight to bag Mayor post appears to be between TRS and BJP. The AIMIM, which was banking on bagging the Mayor post with the support of TRS, seems to have receded to the background in view of the possibility of TRS faring somewhat badly vis-a-vis BJP in terms of the number of wards won in the GHMC polls.
In 2016, the TRS bagged Mayor seat on its own without depending on any other party or its ex-officio members (party MLAs, MLCs and MPs) by winning 99 out of 150 seats. The magic figure to bag Mayor seat is 76.

But in the changed political scenario, with the possibility of BJP putting up a tough fight against TRS, the TRS leadership is believed to be not expecting to bag 99 seats in GHMC this time. For this reason, it has already devised a strategy to utilise its ex-officio members, who have the voting right, to elect Mayor.

Nizamabad MLC and Chief Minister KCR’s daughter K Kavitha is yet to enroll as an ex-officio member. If she enrolls, TRS winning target will come down to 66 seats.

For BJP, it would be a tough task to bag Mayor post. For, the saffron party has just two ex-officio members, which means that the party has to win 96 seats, out of 150 in GHMC polls, to bag the Mayor post.

AIMIM has 10 ex-officio members and the part is hoping to win at least 45 seats out of the 51 it contested in the GHMC polls. In this case, AIMIM would have a total electoral strength of 55 seats for Mayor election. It is hoping to bag Mayor post with TRS support, if TRS wins less than 40 seats in GHMC polls.

The condition of Congress is worse. It has just one ex-officio member in the form of Malkajgiri MP A Revanth Reddy. That means, the grand old party needs to win 97 seats, out of 150, in the GHMC polls which is next to impossible in the present political circumstances. #KhabarLive #hydnews