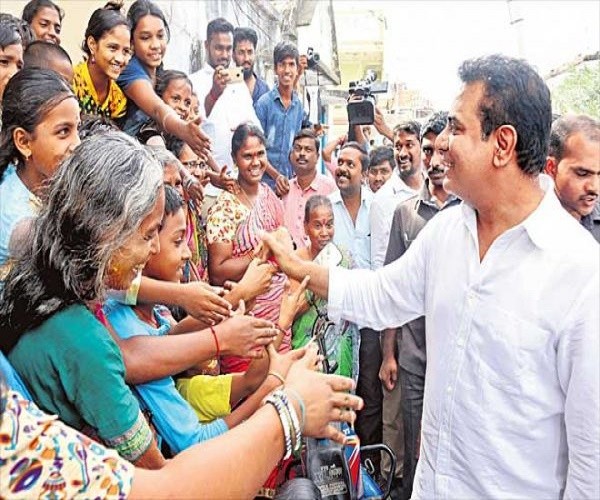 Arch rivals joined hands only to dislodge KCR from Chief Minister’s post, says KTR. IT and Industries Minister KT Rama Rao made light of the Mahakutami pointing out that while the Congress didn’t have cadre, the Telugu Desam Party did not have any leaders.

“The Congress and TDP who were seen as arch political rivals have joined hands now with the sole aim of dislodging K Chandrashekhar Rao from the Chief Minister’s post, which will not happen,” the Minister said, addressing a meeting of party workers in Sircilla town.

“Should KCR give up the post because he has increased pension amounts, ensured 24-hour free and quality power supply to the farm sector, implemented schemes like Rythu Bandhu and Rythu Bhima for farmers? Or should he step down for introducing welfare schemes like Kalyana Lakshmi and Shaadi Mubaarak, providing employment to weavers, among other various initiatives for all sections of society?” he asked.

Taking potshots at the Congress, the Minister said the party was merely promising schemes that had already been launched by the TRS government, and doubling the existing amount. Referring to the Congress’ promise to give Rs 2,000 pension, he wondered why the party which ruled the State for 67 years did not enhance pension during their tenure.

Training his guns on the BJP and Prime Minister Narendra Modi, the Minister said the BJP’s promise to pay house rent to homeless people if it was voted to power was a sham. “Before the 2014 polls, Modi promised to deposit Rs 15 lakh in the accounts of every Indian by bringing back black money stashed in foreign banks. Instead, the Prime Minister only created problems for the people through demonetisation,” he said.

Pointing out that between 2004 and 2014, the government had got only Rs 39.40 crore revenue through sand quarries auction, Rama Rao said the TRS government had earned a whopping Rs 2,000 crore revenue in the past four years. “Who are the sand smugglers? People know the answer,” he said, adding that Congress leaders siphoned money every which way they could.

While the TRS government was completing all pending projects with the objective of turning parched lands into lush green fields, the Congress leaders had filed 200 cases in courts against them, he pointed out.

Talking about Sircilla Assembly constituency which he represents, KTR promised a multi-fold increase in development if he gets elected. Sircilla Municipality would be developed as a model civic body in the State, he said and promised to provide rail connectivity within three years besides providing training to 10,000 women for employment in Apparel Park subsequently.

Besides irrigation water, each and every household would be provided tap water by Deepavali through Mission Bhagiratha, he said. Weavers, who used to struggle to earn Rs 6,000 to Rs 7,000 per month were now earning Rs 16,000 to Rs 20,000 per month relying on government orders like Bathukamma sarees, Rajiv Vidya Mission uniforms and other such orders. In order to protect the interests of weaving community, government was giving all orders to Sircilla weavers. #KhabarLive